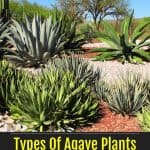 The Agave Plant is a group of over 200 species of succulents, all hailing from the New World desert or near-desert areas of South America, Central America, Mexico the Southwest United States, and even the Caribbean.

These large, tough, cactus-like plants in the Agave family are amazingly useful and economically valuable to the people in these areas.

Agaves are used to produce a wide variety of products ranging from:

In addition to being a valuable crop, these stunning plants make great houseplants.

They also, make excellent additions to Mexican and Southwest-inspired landscapes, desert landscaping, and xeriscaping to go with attractive cacti, yucca, and aloe plants.

In this article, we will share information on some of the most popular agave species and the various types of agave plants. Read on to learn more.

Many Varieties Of Agave Plant Types

When seeking out just the right plant agave type for your setting, you will have a lot of excellent choices.

Of the more than 200 species of agave, several dozen are cultivated for agricultural, industrial, landscaping, and home use.

Some Agave plants are small, potted-plant-sized specimens with sharp terminal tips and some are giants that will tower over your home when blooming time comes.

Do All Agave Plants Die After Blooming?

Yes, after flowering Agaves slowly die. However, most send out new suckers or pups. It may take decades for an Agave to flower.

Learn more in the article: What To Do When Your Agave Plant Blooms?

How Tall Do Agave plants Get?

The size of Agaves varies depending on the variety. Some agave types only grow 18″ inches tall with an 18″-24″ inches spread. Other agave varieties like the century plant reach 6′-8′ feet in height with a 10′ foot spread.

Flower spikes range from 8′ feet to as tall as 60′ feet high on the large varieties.

Agave americana is commonly referred to as the American Century Plant Agave or Maguey in Mexico.

The common variety is a solid bluish color. There are several variegated forms such as Agave Americana Marginata.

Both grow quite large and make good specimen plants in an open setting. [source]

On the flip side, there is another variegated variety Agave americana mediopicta with a central yellow stripe and green margins on the leaves.

Agave victoriae-reginae or Queen Victoria Agave is a smaller plant with upright, black tipped leaves that curve inward to form a compact dome.

This is a good choice as a container or potted plant or as a border plant as it only grows to be about a foot to 18″ inches tall.

The plant lives to be twenty or thirty years old and produces pretty, cream-colored or reddish-purple flowers on a fifteen-foot stalk as its swan song.

Agave Blue Glow is a small, slow growing succulent agave hybrid. Blue Glow reaches a height of one or two feet with a spread of two or three feet and forms a dense rosette of blue green leaves.

Blue Glow is a cross between Agave attenuata and Agave ocahui and was developed at Rancho Soledad Nurseries of Rancho Santa Fe, California by horticulturist Kelly Griffin.

Agave Filifera is also known as the Thread Agave. The plant is very attractive with dark green leaves that may have a slightly bronze cast.

The leaves are edged is white and feature festive white thread-like filaments. This medium-sized plant grows to be about three feet wide and two feet high. [source]

The Agave attenuata plant grows to be four or five feet high and wide with a curved inflorescence holding greenish-yellow flowers on the spike which earned attenuata the common name, Fox Tail agave.

It is a spineless variety with soft, attractive, pliable, threat-free green leaves. When it is young and small, it makes an attractive easy-care houseplant.

As a container plant or in the landscape Attenuata does not present the dangers of its more aggressive cousins.

This is a good choice as a poolside plant or in a small yard where avoiding the plant might be difficult. [source]

Agave parviflora is also known as the Small Flower Agave, Small Flower Century Plant or the Santa Cruze striped agave. This small, delightful plant only reaches a height of about eight inches.

Agave parviflora is similar to Agave filifera in that it also produces pretty “hair” filaments in curls around its compact, attractive leaves. This plant’s flower stalk stands 3-7 feet high and produces pretty yellow or cream-colored flowers that are very attractive to bees and other pollinators. [source]

Tequilana azul is also known as Weber’s Blue Agave, Tequila Agave or simply the Blue Agave plant. where agave nectar comes from. This is the plant that is used in making tequila. It is also a good landscaping plant for gardeners in high altitudes.

These plants prefer rich, well-drained, sandy soil. The plants grow quite large and can live several decades. If you take one on be prepared for a commitment! [source]

Strong focal or accent plant in desert gardens. Excellent for use around patios. Plant as single specimens or in groups spaced at 5′ to 6′ feet on center.

Agave desmetiana variegata, is the variegated form of desmetiana and makes a wonderful potted specimen.

Agave Vilmoriniana is better known as the Octopus Agave and is an unusual looking succulent agave with rosettes growing 3′ – 4′ feet high and 5′ – 6′ feet wide.

One of the ‘friendlier’ Agaves, with fine, soft serrations along the leaf margins and a soft terminal spine.

Agave Potatorum is more commonly known as the “butterfly agave”.

The leaves resemble the wings of a butterfly. It is a slow-growing, medium-sized agave and makes an attractive potted plant.

When grown in a container it is very easy to control its size.

Agave Angustifolia also known as the Caribbean Agave is a rosette forming narrow-leaved variegated Century Plant growing to about 4′ feet high and wide.

Agave ovatifolia is a beautiful agave from northeastern Mexico. Ovatifolia is cold hardy and easy to grow.

Agave Macroacantha known as the Large-Thorned or Black-Spined Agave it is has medium-sized leaf rosettes with narrow blue-gray leaves ending in sharp 1” inch black terminal spines at the tips.

Plant form a colony with offsets. Flowers have a purplish-green color, usually small, with no distinct scent. Prefers full sun.

Agave Lophantha is green but Agave Lophantha ‘Quadricolor’ is a variegated plant with yellow stripes and a pale green midstripe down the dark green leaves with reddish edges lining the teeth.

The variety Agave lophantha ‘Splendida’ in 2013 was picked as a Florida Garden Select Plant. Creamy-gold center stripe run down the dark green rosettes. Many agave species typically grow slow and take plenty of time to outgrow their pots.

Agave bracteosa aka Squid Agave an also as the Candelabrum Agave is a slow-growing, drought-tolerant species. Makes a wonderful potted specimen, a conversation starter and right at home in the rock garden.

Agave Montana is known as the mountain agave since it comes to the high mountains at around 9,000 feet above seas level.

In its natural habitat, this type of agave species generally grows as an understory plant.

Agave salmiana is a large growing plant, reaches heights up to 6’ feet and spreads up to 12’ feet.

Agave Colorata is native to coastal, areas of Sonora, Mexico. It thrives in warmer climates, with full sun and low water.

Agave Titanota aka the Rancho Tambor Agave is a slow-growing compact solitary rosette reaches a maximum height of 1′ – 2′ feet and a width of 2′ – 3′ feet.

Light-colored green leaves one to 2′ feet long and about 5″ inches wide. The terminal thorns are interestingly flat.

These are just a few of the best types of agave plants for home and garden.

Check out this collection of 15 interesting Agave types for use as potted plants or in sunny areas around your home: