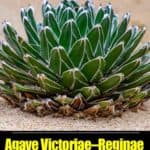 This Mexican native can be found growing naturally in various locations throughout the Chihuahuan Desert, close to Saltillo, in the state of Coahuila and just outside the city of Monterey in Mexico.

The plant’s specific epithet was given to it by Thomas Moore a botanist and English gardener in the 1800s.

He named the plant in honor of Queen Victoria who reigned over the United Kingdom and Ireland from the early 1800s until the early 1900s.

This plant’s common names include:

Agave victoriae reginae grows slowly and forms attractive clumps of foliage in a rosette formation with white markings and growing about a foot high and two feet wide.

It is recommended for USDA hardiness zones 9 – 11.

Victoria Agave Century Plant blooms once in its lifetime sending forth a bare spike as tall as 15′ feet high.

At the end of the spike are thick clusters of fragrant, reddish purple flowers.

Reginae Agave is monocarpic, so the parent plant will die after blooming.

Individual dark green leaves with white-margins along the edging of the margins.

If you plant Victoria Agave outdoors, make sure that it gets plenty of full sun or light shade.

However, protect it from harsh punishing afternoon sun.

When kept indoors, place the plant in your sunniest window.

This hardy agave can tolerate very cold temperatures down to 10 or 15° F.

If your location gets a great deal of rain in winter, bring your Queen Victoria agave inside.

Because it’s able to tolerate extremes in temperature, it can do well from year-to-year even in very cold climates.

The key to winter success with a Victoria Century Plant is dry soil in the wintertime.

Royal Agave is both drought tolerant and deer tolerant.

Throughout the growing season Agave victoriae reginae has regular water needs. But, allow the soil to dry thoroughly and then water deeply.

If you live in a very dry climate, you may need to water more than once a week during the growing season.

In the wintertime, allow your Agave victoriae reginae to go dormant. Water seldom or not at all.

Young plants (pups and seedlings) do well with an initial application of a balanced (20-20-20) fertilizer to help them get established.

Mature plants need little or no fertilizer. Be advised that fertilizing may trigger a mature plant to bloom and then die.

The best soil for reginae agave victoriae should be light, airy, and a sharply well drained succulent soil.

Include a great deal of grit in the soil mixture.

A combination that is about 50% compost, potting soil or garden soil and 50% sharp sand, pumice, grit and/or gravel is ideal.

Because this plant is so slow-growing, you needn’t repot it frequently.

In fact, as with most Agave plants it’s best not to disturb the plant once it is established.

Repot only when it shows signs of becoming severely root bound.

Use a clean, sharp blade to trim off any withered or damaged leaves.

If the cut edges of the leaves seep, dust them with sulfur powder to help them dry and callus over.

Water the plant after trimming.

Wear protective gloves to prevent skin irritation from the sap or accidental jabbing from the thorns.

Propagation is usually done by seed because Victoriae reginae does not typically produce pups.

In some instances, the plant may produce pups at the end of the flower spike.

To encourage this possibility, allow the spike to fall to the ground naturally.

Pups may grow along the spike starting at the flowering end and moving along the body of the 15′ foot terminal spike.

With the right setting, sharply draining soil and the correct watering regimen, you should not have any problems with Queen Victoria Century Plant.

Overwatering, compacted soil and/or lack of light will cause problems with root and crown rot.

Is the plant considered toxic or poisonous to people, kids, pets?

Take care to place your agave out of the reach of pets and children because the sap may be irritating, and the terminal spines on each leaf can cause injuries.

The agave snout weevil is a problem with many Agave plants.

However, the weevil seems to stay away from the hard to pierce tough and non-juicy leaves of Agaves:

This slow growing plant is dependent on very specific environmental conditions and is not considered invasive.

The Royal Queen Agave is an easy plant to grow. They do well in challenging locations with little or no care.

Because Queen Victoria Agave is native to northeastern Mexico, it does well in semi-desert conditions at elevations ranging from 500 feet to 4000 feet.

It grows naturally on steep cliffs where it clings to very poor soil.

These characteristics make Queen Victoria Century Plant an excellent addition for a rock garden, potted or featured in an outdoor succulent garden.

It is also a good choice for xeriscaping or in coastal gardens. It requires very little or no irrigation and can deal with extremes of temperature.

Because this plant does not grow to great size and does not produce pups at its base, it’s a very good choice as a potted or container plant.

In any climate, Agave victoriae reginae can make a nice house plant if you have a very sunny indoor setting.