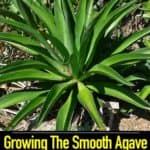 It’s a plant that has been cultivated for centuries but originally hails from Mexico.

The botanical name is partly derived from the Greek word ‘agavos’ which translates to noble or admirable.

The name ‘desmettiana’ (sometimes known as Agave desmetiana) is a nod to the celebrated Belgian horticulturalist Louis De Smet.

The common names include:

Desmettiana is also known by these synonyms:

The dwarf century plant has a slow to medium growth rate and can grow 3’ feet tall with a spread of 3’ to 4’ when it’s planted in the ground.

Desmettiana grows rapidly when given plenty of water, and the graceful, arching glaucous leaves make it an attractive ornamental in the landscape.

When grown in pots or containers, plants will have a slightly smaller spread and growth. It is best grown in USDA hardiness zones 8 and 10.

Several varieties are available on the market:

This beautiful plant has an appearance similar to the octopus agave plant.

The leaves grow in a rosette pattern and a dark shade of green with star-shaped stems.

They’re generally smooth textured but are known to have tiny feet or spines along the edges.

The leaves thin out towards the edge, curving at the tip that is a lighter shade of red, giving the plant a gorgeous tint.

Smooth century agaves take a very long time to flower in spring to early summer and only do so once in their lifetime.

But when it does it will produce 1.5” long pale yellow flowers. These flowers sit on a flowering stalk reaching 8’ to 10’ feet tall.

It can sometimes produce ‘bulbs’ which add more character to the plant’s appearance.

The blooming process of smooth agave can take a long time, sometimes going up to several months.

The flowers at the base of the flower stalk will open up first, followed by the ones higher up.

This is a light-loving plant that can tolerate the full sun but thrives in filtered, slightly shaded light.

It’s not a very cold tolerant plant, is sensitive to frost, preferring arid environments instead.

In the winter months, it is best brought indoors if the temperature is expected to drop below 27° degrees Fahrenheit.

Smooth agave is not a frost-hardy plant and becomes damaged if left outdoors in extremely cold temperatures.

Agave miradorensis is drought tolerant making overwatering your agave a major concern with this low maintenance plant and should be avoided at all costs.

Use warm water, and don’t allow the soil to dry out completely between waterings.

However, as the temperature drops, reduce the watering frequency to avoid root rot.

This plant only needs feeding during the spring and summer months.

Because of its slow growth rate, it will take quite some time for it to outgrow its container making it perfect as a container plant for full sun.

However, if you choose to repot make sure you use a well-drained potting mix. Do not plant Agave desmetiana too deep or else the plant risks root rot.

This is a no-fuss plant that does not require a ton of maintenance.

Trim the spines off the leaves if the plant is placed in a spot with lots of traffic.

Plants can be groomed to emphasize the shape of the plant by removing suckers around the base.

How To Propagate Smooth Agave Desmetiana

To remove the offset but make sure not to cut too close to the base.

Close cuts may hinder its ability to grow.

Let the cut dry out before planting the offset into a prepared rooting mix.

Once it begins growing, feed with a soluble fertilizer and water it as needed to encourage healthy growth.

This plant is generally pest and disease-free. However, it can be susceptible to root rot if overwatered and occasional attacks from the agave snout weevil.

Make sure the potting soil does not hold too much moisture.

Smooth agave is a great plant to use for xeriscapes and desert gardens due to its low watering needs.

It can also be used in full sun as an accent piece or focal point in the garden due to its beautiful, unique appearance.

Its moderate size makes it a good option for container gardens. Plant as a single specimen or in groups spaced 5′-6′ apart.

It can also be used as a houseplant if placed in a sunny location.