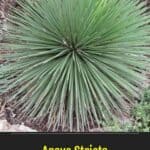 Agave stricta is an evergreen succulent plant native to Puebla and Oaxaca in Southern Mexico.

Stricta belongs to the Agave plant genus, a member of the Asparagaceae family.

It has received the Royal Horticultural Society’s prestigious Award of Garden Merit.

Other common names for Agave stricta are:

If you’re planning to add one of these delightful plants to your garden, consider the following Agave stricta plant care tips.

Agave stricta is a slow-growing plant that thrives in hot, dry climates. It can also be grown during the winter months, but there has to be thermal protection.

Agave stricta usually generates many offsets, producing a large colony. The leaves forming the plant’s rosettes are square, almost round in cross-section.

Agave stricta produces funnel-shaped flowers in racemes that are much taller than the rosettes, standing at the height of up to 7′ feet (2.1 m).

The racemes carry small reddish-purple flowers that bloom in summer.

Like all Agave varieties, stricta plants need a lot of full sunlight. If you want to place your plant indoors, make sure you have a brightly lit sunny window that allows a lot of light.

If you keep your Agaves in too much shade, the lack of light will cause them to become etiolated.

If you decide to place your plant outdoors, it’s best to do this from spring to fall. Be careful about too much exposure to direct sunlight, as it can lead to sunburn.

Agave stricta enjoys warm temperatures during the growing season. But it has no issues with cooler temperatures while resting in winter.

This plant is recommended for USDA hardiness zones 9a to 11b: from 20° to 50° degrees Fahrenheit.

Agave stricta plants are very drought tolerant. They only require moderate watering throughout spring to fall when the soil dries. Keep the soil almost dry in winter; water once or twice a month in spring and summer.

Avoid overwatering the plant to prevent fungal root rot. If you’re growing Agave stricta outdoors, start off watering about once or twice a week.

Potted plants need watering more often than those established in the ground.

As for feeding, use a small amount of fertilizer in the spring during the first couple of years. Older plants can sustain themselves from that point.

Transplanting isn’t necessary every year because it’s a slow-growing plant. It can take quite a while for it to become pot-bound.

When this happens, repot your Agave stricta with fresh soil in a new, slightly larger pot. Allow the plant to readjust for a week or so; then, you can water it again.

Always wear protective gloves while repotting because the sap is irritating and the thorns are very sharp.

Unless you notice dead or diseased leaves, Agave stricta doesn’t need grooming or pruning. The plant’s leaves are rather tough, so cutting them requires strong shears, a very sharp knife, or a curved pruning saw.

During maintenance of an Agave stricta, always protect yourself from the sap and sharp spines. Use protective gloves, protective glasses, and long-sleeved shirts.

Generally, Agaves aren’t difficult to grow and care for. As a slow-growing plant, they don’t need a lot of attention.

So if you’re someone looking for a highly involved hands-on experience with your houseplants, Agave stricta may not be the best match for you.

But, if you don’t mind a “set it and forget it” arrangement and live somewhere with access to sunlight, then Agave stricta should be right up your alley.

How to Propagate Agave Stricta

Use offsets to propagate Agave stricta because it can take years to generate seeds. The best time to remove the offsets is in spring or fall, and the ideal mother plant is one with several leaves.

Once separated, remove all broken or damaged roots from the offsets and allow them to dry for a week. Then, pot them with a well-drained soil mix and water when the soil is dry.

Roots should appear in a couple of weeks. More on Growing Agave From Seed

Agave Snout Weevils are the most common pests of Agave stricta, and the only way to get rid of them is by discarding the infected plants.

As for diseases, bacterial and fungal rots are likely to occur with too much watering.