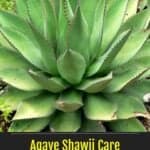 Mankind is a race of dualities, and this is no more true than the way in which we both destroy and try to protect nature.

A perfect example is Agave shawii (a-GAH-vee SHAW-ee-eye), the westernmost species of agave found only in Baja Mexico and just inside the coast of southern California.

This perennial member of the Asparagaceae family (formerly Agavaceae genus) is critically endangered in its native habitat. Humans are keeping the species alive in captivity while also creating hardier cultivars such as Agave shawii ‘John Bleck’ to reintroduce back into nature.

Best known as coastal agave, this plant also bears the common names of:

An easy and impressive plant to grow at home (literally a set-and-forget, if kept out of reach of kids and pets). You can be a part of a larger conservation effort by adopting one of these wonderful agave plants for your collection.

Coastal agaves are slow growers which can take up to 30 years to flower, at which point like all agave species the flowering rosette dies.

Each rosette generally grows to around 2′ to 3′ feet tall and 2′ to 4’ feet wide and will produce suckers (new plants) as they grow older, branching out from the base in solid groups.

The individual trunks are between 4″ to 12” inches long and bear protective, bent reddish spines, while the flowering stem that eventually appears may reach 3′ to 8’ feet tall.

After approximately 20 to 30 years, a massive 6′ to 14’ foot tall inflorescence emerges from the flowering stalk, bearing reddish horizontal branches with long purplish bracts along the top third.

The tips of these leafy bracts are tipped with umbels of red buds that give way to yellow flowers. While the rosette bearing the inflorescence dies, usually in a colorful display of orange, then light brown, and ending as grey.

The blooms usually occur from February to May, although there are cases of it producing the blooms at other times of the year.

Details on What To Do When Your Agave Flowers?

Coastal agave loves sunlight and will need access to full sun under most circumstances.

Indoors, place it in a window with full afternoon exposure.

Outdoors, it may need to have some light shade in the hottest hours of the day in more arid regions.

You can grow this plant outdoors in USDA hardiness zones 9 to 10.

Unlike many other plants, it’s not advised to move a container with this plant outdoors in cooler climates due to the teeth and risk of contact with its highly toxic sap.

You may wish to use a moisture meter instead of your finger with this plant, although a popsicle stick or similar instrument will work.

Damp soil will stick to your tool, allowing you to measure the moisture depth without coming in contact with the plant.

Water when the soil is dry 2” inches down using the soak and dry method.

This means you’ll want to water slowly and evenly until you see seepage from the container’s drainage holes.

Due to this plant’s drought tolerance and adaptation to sandy and rocky soils in its native environment, fertilization isn’t necessary.

You don’t need to pamper this plant. In fact, it’s well-adapted for sandy, rocky, and coastal soil types. Just make sure the soil is well-draining.

For potted plants, you can go with a cactus or succulent mix, cut in half with an aggregate such as coarse sand, gravel, or perlite.

Repot this plant annually or when it doubles in size, choosing a larger pot in the latter case.

Be sure to work in an area where you won’t be disturbed and to wear heavy gloves to avoid direct contact with the spines and sap.

It’s not necessary to prune this plant unless you wish to restrict the number of offshoots.

When grooming, avoid contact with the sap and be sure to use heavy-duty gloves and sterile, sharp shears.

How To Propagate Coastal Agave

This agave may be propagated through several methods, although leaf and stem cuttings are rarely used due to the plant’s many spines.

Instead, most growers prefer to use either offshoots (pups) or seeds.

Related: How To Propagate Agave Pups

Despite its endangered status, Shaw’s agave is actually fairly robust.

The plant is also resistant to most pests and diseases, with root rot and scale being the two biggest threats.

As with many other agave plants, this species and its cultivars are toxic if ingested, and the needle-sharp spines can pose a risk of injury if placed where a child or pet may try to handle it.

This plant is known to attract birds, butterflies, and hummingbirds. It plays well with most cacti, as well as succulents native to nearby regions.

It’s also well-suited as specimens for several garden types, including: