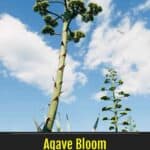 When your agave blooms, it is always a special occasion. Your plant suddenly grows these colorful flowers that make your garden space pop with life.

Although it’s always great when plants start to bloom, the blooming of agave plants is always a bitter-sweet incident.

Agave plants don’t bloom as often as other plants, as some might bloom every several years. In this article, we’ll teach you what to do when your agave blooms, so your plants will always stay in excellent shape.

What to Do When Your Agave Blooms

Most plants bloom every spring, but the situation is different in the case of the genus agave where plants bloom only once.

The blooming time of your agave plant depends on its variety. Some types of Agaves, like Agave Americana, take decades to bloom once, while others can bloom after 6 years or so.

However, in most cases, an agave plant can take about 10 years to bloom. This is why most gardeners call the massive agave plant the century plant.

The plant will start to grow a spike-like stalk, and this is where the flowers will start to bloom. This flower stalk will keep on growing from the mother agave plant and can become extremely long.

Later on, smaller branches will start growing from the mother branch and will produce leaves that later form clusters.

Some flowering branches start growing green, while others will grow to be red from the very beginning.

The leaves form clusters that later house a flower, which is rich in nectar. This nectar is one of the main reasons why agave plants are grown for commercial purposes, as the flower’s nectar is usually used as a substitute for sugar.

Because the flowers tend to take a long time to grow, the agave sweetener is usually expensive. You need the nectar of several flowers to obtain a small amount of this natural sweetener.

How Long Do Agave Blooms Last?

The life of the agave blooming branch differs from one variety to another. Some branches develop faster, while others take a long time to grow.

In most cases, the blooming phase of the agave can last between 3 and 4 months. After this period, the flowering bloom starts to face downwards and fall off.

Although the bloom stalk’s life is too short compared to the overall life of the agave plant, it can reach a massive height during this limited period.

Once the branch has reached its maximum height, it will start to grow multiple branches that house the flower that contains the nectar and the seeds.

The flowers of your century plant bloom and can stay alive for about one month before they start to wither and die.

Related: Is The Agave Toxic of Poisonous?

Do Agave Plants Die After They Bloom?

Due to the massive amount of energy used to help the blooming branch grow and reach its maximum height, after this period, the agave will eventually die out. The new seeds will fall to the ground and help create a new clone of the existing plant.

As a matter of fact, the bloom stalk dies because the mother plant is no longer able to support it. The seeds help create multiple clones of the original plant.

Can You Stop an Agave Plant from Flowering?

Yes, you can cut the bloom stalk from the plant as soon as it starts to grow out. However, this won’t keep your agave plant alive forever.

How Long Will An Agave Plant Live?

After the growth of the bloom stalk, the agave plant will probably last for a few more months. Then, the seeds will be able to grow new clones of the same plant.

The Agave Americana is widely known as the century plant, although it doesn’t take a century to bloom. It might take about 40 to 50 years before it starts flowering.

Unlike other plants that bloom every spring, the agave plant will only bloom once in its lifetime. The bloom stalk takes about 3 to 4 months to grow and will mark the end of the plant’s life. The flower grows to provide the sweet nectar of the agave and also houses the seeds, which can be used to grow clones of the older plant.