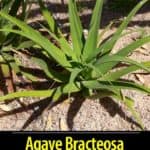 As with many other types of agave plants, it’s a perennial.

With proper care, it may last for many years and eventually produce a short inflorescence spike covered in small yellow or white flowers.

Bracteosa agave is a slow-growing plant but may eventually reach 2’ – 3’ feet tall. The rosette typically contains about 20 succulent leaves.

Spider agave is a perennial taking many years to mature and may eventually produce a single bloom.

After the plant matures, it typically sends up a 3’ – 5’ foot tall spike producing a cluster of white or yellow flowers.

Instead of covering the entire inflorescence with blooms, the flowers cluster around the top third of the spike.

When the flowers die, the main rosette starts to die.

Luckily, it produces a few offsets as it matures.

Spider bracteosa is native to the dry, arid mountain ranges in Mexico and can survive relatively cool temperatures.

It’s winter hardy in USDA hardiness zone 8a to 11b.

Grow the plant under partial shade but avoid too much shade.

If placed indoors, direct sunlight from a south-facing or west-facing window may scorch the leaves.

If scorch marks appear, move it to another spot.

As with most succulents, spider agave is drought tolerant. Allow the soil to dry between watering.

The plant goes dormant during the winter and may not need watering at all.

Use liquid plant fertilizer during the summer months to encourage fuller growth. However, feeding isn’t a requirement.

Never pour water directly into the center of the rosettes as it may cause mold growth or fungal disease.

Water the soil around the base of the plant.

Use well-drained soil, such as a 50/50 combination of potting soil and organic matter, pumice, or perlite.

The water should mostly drain from the surface within ten minutes of watering.

Only transplant when it outgrows its pot. The plant grows slowly so it may only need repotting once or twice in its lifetime and shallow pots and containers work well.

If the root system grows too deeply, stem rot may appear during the summer months.

Spider bracteosa doesn’t need grooming. However, after the flower appears and dies, some gardeners prefer to trim off the spike.

How To Propagate Squid Agave

After two to three years, the plant may start producing offsets.

It doesn’t typically produce many offsets but should provide at least a few for propagation before it matures.

To propagate from offsets in the spring:

The offset may take a few weeks to resume active growing.

During this time, keep the plant under bright light while avoiding direct afternoon sunlight.

Allow the soil to dry between watering, checking it every two to three days to avoid long periods of drought.

Be careful when growing any Agave around children or pets.

The juices inside the succulent leaves may cause mild contact dermatitis, resulting in reddish patches or blisters on the skin.

The red spots or blisters may only last a week or two, but itchiness and general irritation may last on and off for up to a year.

Stem rot may pose a problem when the root system grows too deeply.

The best way to deal with this issue is to transplant to a shallower container and limit watering until the rot passes.

If the rot remains, propagate the offsets and discard the mother plant.

When growing the plant indoors, aphids or spider mites may appear. The Agave snout weevil is another potential problem.

As soon as the pests show up, take the plant outdoors and wash them away with sprays of cold water.

Due to the long leaves, being drought tolerant and deer tolerant, the spider agave is often used to add color to the rock garden.

They also work well as stand-alone plants in their own containers.