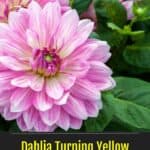 There are numerous potential reasons a dahlia may begin turning yellow, and finding the cause is usually a process of elimination.

Here are the potential causes in order of most obvious to least, as well as how to deal with them.

By far the most common problem, giving your dahlia too much or too little water tends to be the source of not only yellow leaves but often the flashpoint for many of the other problems in this list.

Too much water can lead to fungal infections, infestations, and root or stem rot.

Root rot destroys the roots, causing your plant to be unable to eat or drink despite there being plenty of nutrients.

Stem rot is a little less common, but no less destructive and can be spotted by the white crown that forms on the stem at the soil level.

Other symptoms of overwatering are limp yellow leaves that feel soft or soggy, browning leaf tips, and blistering of the leaves.

Meanwhile, the main symptom of underwatering is limp yellow leaves that feel dry to the touch.

Diagnosing this problem can be as simple as sticking your finger in the dirt.

If the soil feels dry more than 1” inch down, the plant needs water.

If the soil feels or looks soggy, you need to let it dry and improve drainage by adding perlite or another aggregate.

You may also wish to uproot a waterlogged plant and check its roots, returning it to fresh, dry soil if possible.

Dahlias only need about 1” inch of water per week, so it’s rare that you’ll need to water a grounded plant unless you live somewhere arid.

Meanwhile, potted dahlias should be watered when the soil is dry 1” inch down.

Always water slowly and thoroughly to give the soil time to become evenly moist.

There are many pests that can potentially infest your dahlias, and many can lead to yellowing.

Potato leafhoppers will snack on the undersides of Dahlia leaves, causing them to turn yellow and curl.

Aphids and spider mites can cause yellowing of infested leaves as they drain the plant of sap and leave it open to disease.

Scale can also cause yellowing and there are three types of scale that have slightly different effects.

Mealybugs and soft scale leave behind frass called honeydew which attracts sooty mold and other fungi that interfere with photosynthesis, resulting in yellow leaves.

Armored scale, however, doesn’t leave honeydew and will instead continue to feed on the undersides of leaves until the leaf turns yellow and dies from sap loss.

All of these pests have two things in common: They break through the surface of the plant and they’re thus vulnerable to neem soil soaks.

Even armored scale, which has a wax coating that can block most insecticides, cannot avoid the power of neem oil when used right.

When applied, the neem soil soak is absorbed by the plant’s roots and becomes a systemic insecticide that remains potent for up to 22 days.

Insects that ingest the neem-treated sap can suffer sterility, fail to reach the adult stage, or even lose their appetite and starve to death.

Best of all, the soak may be applied every 2 to 3 weeks as a preventative and won’t harm beneficial insects.

Related: Why Are My Dahlias Not Flowering?

There’s one more insect pest we haven’t mentioned because it’s also the most serious one: thrips.

These tiny fliers can spread quickly to other nearby plants and feed off of your plants’ sap, resulting in leaf yellowing over time.

However, they’re also vectors for the dahlia mosaic virus.

This incurable virus is one of several in the Caulimovirus genus and once a plant is infected, there’s no saving it.

The virus itself won’t kill the plant, but it will cause yellow spotting on the leaves and can also lead to deformed blooms, black spots, yellow streaking, and other side effects.

While the virus doesn’t spread on its own, having an infected plant near healthy ones could allow future pest infestations to spread the virus.

In comparison to mosaic virus and root or stem rot, other diseases may seem tame.

The most common diseases are fungal infections, such as sooty mold and Dahlia verticillium wilt.

These are often surface infections caused by the presence of honeydew and can interfere with photosynthesis, resulting in the plant yellowing.

Neem foliar sprays can have an effect against these fungi, or you may wish to use a fungicide for quicker results.

Be sure to treat your plants for any infestations that may have led to the fungal infection as well.

While easy to treat, diagnosing a soil issue usually comes down to either process of elimination or paying for a soil test.

Soil-related issues that can cause yellowing are generally due to poor soil pH or a lack of magnesium and/or iron.

These plants like more acidic soil, and acidity is also important for iron absorption, as iron becomes insoluble if the pH goes above 6.5.

You can spot chlorosis by the yellow leaves that still have green veins.

A soil test that reveals a shortage of magnesium is incredibly easy to fix.

Simply add a teaspoon of Epsom salts to your next watering.

Proper mulching with organic compost can help prevent deficiencies or a loss of acidity.

Likewise, you may need to boost the fertilizer you’re using if a soil test shows a shortage of NPK content.