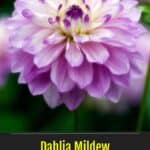 The dahlia (DAL-ee-a) has seen unheard-of success worldwide, with its 42 species boasting over 57,000 registered cultivars and counting.

You can find one of these plants with just about any shape and size of flower, from tiny buds to ones that rival a sunflower, round pop-pons, flat single flowers, and more!

The plants are also quite easy to grow and relatively free of pests and disease.

However, you might have noticed a strange white powder forming on some of your dahlia’s leaves.

This is powdery mildew, a condition that may only be a symptom of a larger problem.

What Is Dahlia Powdery Mildew?

Powdery mildew may resemble talc, but it’s a type of fungal infection caused by a wide range of fungi.

The species of fungus which affect dahlias most are:

It most often appears as a result of infestation or when there’s an especially high humidity of at least 95% percent in conjunction with temperature fluctuating between 68° to 86° degrees Fahrenheit and low light.

This combination of factors means you’ll most often run into powdery mildew in the spring and autumn when weather conditions are at their most unstable.

What Damage Does Powdery Mildew Cause?

Powdery mildew doesn’t cause any major harm to dahlias, but it can still be a big problem.

Infected leaves will appear to have whitish dust covering them as if someone sprinkled the leaf with talc or confectioner’s sugar.

Infected leaves will lose their ability to properly photosynthesize if left untreated, which will result in distorted or discolored leaves that will eventually wilt and fall off.

The mildew can easily spread to nearby leaves, allowing it to infect much of the plant in time.

However, the species which affect dahlias are unlikely to spread to other genera of plants nearby.

More importantly, powdery mildew may be a sign of a pest infestation.

A wide range of sap-drinking bugs such as aphids, mealybugs, and scale left behind partially digested sap is called honeydew.

This honeydew is a perfect breeding ground for powdery mildew.

How To Control Dahlia Powdery Mildew?

Immediately remove any leaves showing signs of infection, and be careful not to bring them into contact with healthy leaves.

Make sure your shears are sterilized between each cut by dipping them in some rubbing alcohol.

You will also want to locate and eliminate any pest infestations at this time.

Once you’ve removed the visible infection, it’s time to treat the invisible spores.

Chemical fungicides work well for this step, as they’re usually quick and effective.

The biggest downside to using fungicides is that you need to change it up frequently, so fungi are less likely to develop resistance.

Thus, if you use fungicides with a specific active chemical once or twice, switch to different active chemicals for the next 1 to 2 treatments before using the first chemical again.

However, fans of natural remedies can turn to every gardener’s ally: neem oil.

Powdery mildew anchors itself to the Dahlia leaves, piercing the surface.

As a result, it’s both an internal and external infection.

Neem foliar sprays applied at dusk or dawn can not only help fight off the mildew on a leaf’s surface but will suffocate piercing insects on contact.

Apply it every other day for 14 days or until all signs of infection are gone.

Meanwhile, a neem soil soak will attack the internal portions of the fungus, and the poison will pierce the insects, so they are no longer able to reproduce and may even starve themselves to death.

The soak should be applied every 14 days until the infection or any accompanying infestation is gone.

Finally, you may make a homemade sulfur spray solution to treat your dahlias.

The sulfur makes it impossible for the fungus to survive on treated leaves.

However, treating a dahlia with sulfur in temperatures above 85° degrees Fahrenheit can actually harm the plant, so reserve this treatment plan for cooler days.

There are several preventative measures you can incorporate into your daily care routines that will help prevent future outbreaks of powdery mildew and help prevent other problems as well.

Neem foliar sprays may be applied safely every 14 days to help protect plants from infestations.

Likewise, neem soil soaks may be applied every 2 to 3 weeks. It will remain an effective systemic pesticide for up to 22 days, and it can also attack any fungal or bacterial infections that break through the plant’s surface.

Water is another major vector for powdery mildew on dahlias, so try to avoid getting the leaves wet when watering. Details on watering Dahlia flowers.

Try to prune around the base of the plant to get more air circulation, and try not to use sprinklers or misters around the plant.