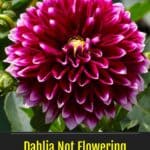 Few plants have benefited from humans more than the dahlia (DAL-ee-a).

The dahlia is so popular, numbering only 42 species, there are currently more than 57,000 registered cultivars and at least 100 more are registered every year.

With such a massive number of plants, it’s an ongoing effort to classify dahlia types.

But what makes dahlia plants so popular?

If you’ve seen one, you’d know the abundant and varied blooms are this plant’s claim to fame.

But what happens when those blooms aren’t appearing or stop part way through their blooming period?

As all growing dahlias have almost identical care requirements, this can be frustrating, especially if one plant blooms but another doesn’t.

Why Does My Dahlia Not Flower?

Unlike other plants, dahlias fail to bloom as a result of only a few factors.

These are most often due to an issue with nitrogen, light, water, or simple resource competition.

The problem with being a heavy bloomer is that there are only so many resources to go around.

Ask a woman how much more difficult it is to bear twins than a single child, and she’ll tell you the same things your dahlia would if it could speak.

Every bud requires a certain amount of resources to grow and blossom, and the resulting flower also requires resources to maintain.

As the flower ages and begins to whither, it continues to draw resources that could be going towards new buds.

As a result, the plant may stop producing new flowers in the middle of its blooming season.

While not essential for many plants, deadheading Dahlia blooms is an important part of their care.

By pinching off flowers when they begin to fade or wilt, you’re helping the plant conserve and redistribute those resources.

Thus, proper deadheading can help ensure a plant doesn’t stall in the middle of its flowering period.

All plants need water to survive, but they only digest a tiny fraction of what they absorb.

The rest goes towards an important process called transpiration.

When your dahlias aren’t getting enough water, they can stop blooming.

Dahlias require an average of 1” inch of rainfall per week, and you can use the same soak-and-dry method you use indoors for garden plants to ensure they’re getting just the right amount of water.

It’s easy to tell if a pot has enough water because water and excess soil moisture will begin to seep from the drainage holes.

However, careful observation will also tell you when an outdoor plant has had enough, as it will begin to take longer for the ground to soak up the water.

Remember, dahlias don’t like drought, so protect them by laying a layer of pine needles or straw mulch 3” or 4” inches deep and make sure not to pile it up on the leaves or stems.

This layer can help keep moisture from evaporating, especially if your dahlia is in a particularly sunny spot or there’s a drought.

Choosing the best fertilizer for dahlias can be an involved process, especially if you haven’t tested the soil before planting.

The issue can become even more complicated by the sheer number of opinions out there regarding the proper ratios.

A good rule of thumb is to use a balanced liquid houseplant fertilizer until the first buds appear, then switch to a fertilizer with half as much nitrogen.

Indoor plants are much easier to regulate because you already know what’s in a potting mix, but the soil in your garden may leech out resources or hoard them.

Nitrogen is great for leaves and stems but does nothing for blooming, so if you’re seeing lush growth but few or no buds, this may well be the culprit.

Try switching to a fertilizer with an even lower nitrogen content and avoid using organic composts as these tend to be high in nitrogen.

One of the easiest mistakes a gardener can make is to plant in a spot with the wrong amount of light.

Dahlias love the sun and require at least 6 hours of full sun each day.

While a little bit of dappled sunlight in the afternoon won’t harm the plant (and may even help in particularly harsh regions), too much can affect the plant’s ability to bloom.

Dahlias will have fewer blooms the more shade they’re exposed to, and enough shade can prevent the plant from blooming at all.

The easiest way to check for this problem is to do the following:

However, you will most often need to transplant the dahlia to ensure it gets proper lighting.