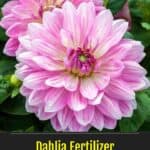 Dahlias (DAL-ee-a) are a strange bunch. These Central American plants have become so popular that the mere 42-species genus currently includes more than 57,000 cultivars with as many as 100 more being registered every year!

Whether you have a pompon, decorative, or single; Dahlias have generally the same care requirements with little variation and can be easy to care for.

However, just because they have a good tolerance for the occasional lapse in care doesn’t mean you want to avoid giving your dahlia the best it can get.

Fertilizer is a great example of something that can make all the difference between an attractive plant and a showstopper.

However, this topic can get pretty complicated (and even heated) because of numerous factors that are often missing from guides.

What Kind of Dahlia Fertilizer Should I Use on My Plants? When and How Much?

Dahlias tend to be heavy feeders, but there has been a lot of debate regarding nitrogen content.

These debates have also affected other factors, such as when and how much you should feed.

The Soil Makes a Difference

Potting mixes can sometimes soil plant enthusiasts by listing the nutrients present right on the package or offering mixes for specific types of plant.

However, you don’t have this benefit outdoors and it’s easy to get things wrong as a result.

This is why getting a soil test is very important, as it will tell you just what your soil has and what it needs.

The main area this affects with dahlias is the necessary nitrogen content of your fertilizer.

Once you have an idea of what your soil has, it’s time to pick a fertilizer.

Nitrogen helps in the growth of stems, leaves, and roots, but many growers worry that too much may reduce the bloom quality.

Phosphorus (P) is important for flower development, but won’t leech out of soil.

As too much can actually lead to potassium deficiencies, so pick a fertilizer with a lower percentage of P if your soil test reveals high levels of this nutrient.

Potassium (K) is an important nutrient as well, and contributes to the overall health of the plant, so this number should always match or be slightly less than the highest number.

This is perhaps the most complicated aspect of feeding these plants, as there’s no one answer.

As a result, you may need to experiment a little to find what works best for your own garden.

However, the following rules may be applied to outdoor plants as a good starting point:

Note that some growers claim that higher nitrogen has actually increased the size and vibrancy of blooms, but natural rainwater helps deliver nitrogen to the soil, so your plant will never be totally without nitrogen.

You may also wish to add coffee grounds (and an organic component, such as the coffee filter), which feed microorganisms that would otherwise deplete nitrogen from the soil, to reduce the need for nitrogen-rich fertilizers.

When to Feed Your Dahlia (and How Much)

Knowing when to feed is a lot easier than deciding what to feed.

New plants actually have all the nutrients they need and don’t need to be fertilized right away.

New plants won’t need feeding for at least 30 days after planting the tubers.

Otherwise, it’s best to feed your plant monthly in spring and summer according to the instructions on the package.

When using nitrogen-rich fertilizer, cut back a little early or switch to a low nitrogen fertilizer later in the growing season so the plant doesn’t become leggy.

Allow your dahlia to rest for fall and winter, as feeding it can cause the plant to pull valuable resources away from tuber growth.

As you can see, keeping dahlia plants fed isn’t difficult, but it will take a little consideration.

A lot of growers prefer to use a balanced formula until the plant buds, then switching to low nitrogen.

Others swear by a high potassium mix.

However, testing the soil before planting (and adding some organic compost when you plant) can help you figure out the specific needs for your dahlias.