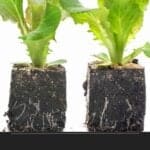 Water beads, also known as hydrogels, jelly beads, water retention crystals, and several other nicknames, are becoming quite the rage.

These absorbent polymer crystals were originally developed to help retain water on farmland.

However, they’ve become popular with houseplant enthusiasts who often use them as a soil-free medium.

With many different colors to choose from, it seems like these little beads would be a great choice, but are they really a good idea?

What are the Pros and Cons of Using Water Beads for Plants?

As with all mediums, there are pros and cons to using water beads.

These pros and cons sometimes depend on whether you’re using them as a soil-free medium or as an aggregate.

Due to the nature of water bead granules, they will naturally expand when absorbing and contract when released.

This process affects the soil around a bead, preventing it from compacting and aiding in both drainage and aeration.

It should go without saying that water beads retain water, but did you know they can store 300 to 400 times their original volume in water?

When used in place of perlite, they can retain large amounts of water and release that water back into the soil at a slow and steady rate.

If paired with a sufficient water-soluble fertilizer, they’re also used as a soil-free growing medium that can allow you to enjoy the plant’s roots without the issues common in growing plants in pure water.

But perhaps even more useful is the fact that these beads can absorb nutrients from liquid fertilizers.

The nutrients are then slowly reintroduced to the soil as the beads dehydrate, which prevents nutrient washout and creates a more even feeding regimen similar to time-release fertilizers but more balanced.

Whether used in tandem with soil or alone, the beads provide a more controlled release of moisture as well as helping to mitigate the risk of overwatering.

Many moisture-loving pests such as fungus gnats and mealybugs are less likely to infest a plant that is using water bead gel.

There is no telling just how long a water bead can last.

They can be dehydrated for storage and most will last between 2 and 9 years, depending on how heavily they’re used.

Beads used as aggregate will slowly break down over time, the rate of which depends on the brand and various environmental factors.

When transplanting a plant from soil to water beads, it’s necessary to rinse the roots completely clean.

This can pose an issue to plants with more sensitive root structures.

Another common problem is that the sudden change may result in some roots withering or leaf yellowing.

These problems are less likely to happen when using the water beads as an aggregate.

Environmental science is still on the fence about whether long-term use of polymer water beads is harmful to the environment.

Polymers are generally considered carcinogenic and a possible neurotoxin, which leads to some concern that traces of these toxins are leached into the soil over time.

An additional, growing concern is the dangers towards children and pets.

The bright colors make them look like candy, and if a child or pet swallows one, it will absorb liquids in the digestive system.

As a result, it can grow up 200 to 400 times its size (depending on the brand) and obstruct the intestines.

Surgical removal is often necessary, and there have been cases of children placing them in their ears, leading to eardrum damage and possibly permanent hearing loss.

While water beads sound great on paper, they actually aren’t quite as miraculous as they first appear.

When used on a short-term basis for houseplants, they can help keep a plant healthy while you’re on vacation, but they’re far less effective at long-term care.

For this reason, it’s important not to rely on them too much when it comes to proper watering techniques.

While not a problem in most circumstances, water beads can compete for space with plant roots in a container.

In the case of plants that don’t mind being rootbound, this isn’t a big issue and may simply mean repotting a little more often.

However, plants that need a lot of root space or may have particularly fragile roots may not respond well to the beads.

The growing and shrinking can also pose a problem for plants that prefer compact soil.

Another potential problem is compatibility with plants that have a dormancy period in winter.

For these plants, the continued release of water may lead to the same problems as if you were continuing to water them regularly.

This issue can be mitigated somewhat by cutting back on watering earlier so the beads have a chance to dry out.

As with any container, water beads will dehydrate more quickly when exposed to light and heat.

Therefore, it’s not generally a good idea to use them exclusively when growing a sun-loving plant.

However, this problem is greatly reduced if the water beads are mixed into soil.