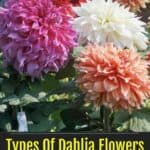 Sorting through a genus of only 42 species sounds easy enough, but what happens when that genus is so popular there are over 57,000 registered cultivars and counting?

This was a question faced by botanists over the many types of Dahlias, which became so popular that over 100’s of new cultivars were registered annually.

The solution was a number of different classification systems for these members of the Asteraceae family, most of which have now been abandoned.

Today, there is a complex system in use by the American Dahlia Society (ADS) which groups dahlias by color, size, and shape using a 4-digit code.

The ADS uses classifications for the flower form nearly identical to the globally accepted one used by the Royal Horticultural Society. As a result, the two have become the primary means of defining dahlia types.

These famous Central American flowering plants have a somewhat messy history but generally agreed that the genus was named after Swedish botanist Andreas Dahl.

During the early 1800s, the species was temporarily renamed Georgina but later reverted to dahlia.

This brief quirk has led to the genus still being called Георгинa in Russia.

While toxic to cats and dogs, dahlias have a long history of use in human medicine and cuisine.

Due to their incredible range in size and shape, dahlias have a wide range of uses in the garden, with larger ones used as focal points and smaller ones commonly found as borders and edging.

The sheer variety in this genus means your imagination is often the only limit to their use.

The official Royal Horticultural Society (RHS) and American Dahlia Society (ADS) use a nearly identical classification system, with the RHS having 14 categories and the ADS having at least 14 (with more if counting the miniature forms).

What follows are the different categories, their RHS group number, their abbreviations for each system, and a description and examples of each type.

A central mass of dense, tubular petals ringed by one or more rings of flat ray florets that may be bicolor or solid.

Often, the two petal types have contrasting colors, and the flower lacks a central disc.

The tips may be rounded, flat, or indented, while the ball may be round or slightly flattened.

The ADS has a sub-category called “miniature ball” for ball dahlias that are smaller in size.

Examples of ball dahlias include:

While not an official type, the ADS uses the terms “border dahlia” and “container dahlia” to describe dahlias that are generally a smaller 12 to 20″ inches tall.

These dahlias may belong to any group but tend to include any dahlia with a smaller, more compact growth habit that would make them suitable as potted Dahlias.

The Gallery series is an example of border dahlias.

These have long, narrow petals in double blooms that have a spiked ball appearance.

The petals are often incurved (IC) or straight (SC).

Examples of cactus dahlias include:

Flat flower with a single ring of ray florets and a central disc.

Sometimes a smaller inner ring of florets is present, leading to a collar-like appearance.

Examples of collarette dahlias include:

The largest dahlias, decorative dahlias, have double-blooms with wide, flat petals and no central disc.

Some examples of decorative dahlias include:

Nurseries and growers commonly use this term to describe any dahlia with blooms measuring larger than a dinner plate (i.e., 8″ inches across).

‘Gitts Perfection’ is a good example of a decorative dahlia considered a dinner plate dahlia.

‘Pink Giraffe’ is an example of a double orchid dahlia.

The petals of these dahlias may be straight, curved, incurved, flat, or twisted.

What sets them apart is how the petals are divided into multiple sections, giving the flowers a fringed (fimbriated) appearance.

‘Marlene Joy’ is an excellent example of a fimbriated dahlia.

Simply put, any dahlia cultivar that doesn’t fit into another official category ends up in this one. However, propagating Dahlia tubers is similar no matter the type.

These flowers boast 3 to 4 layers of irregularly spaced ray petals around a central disc.

‘Bishop of Llandaff’ and ‘Fascination’ are two examples of peony-flowered dahlias.

Known as pompom dahlias in the US, these are globe-shaped double flowers with inward-curving petals which may be blunt or rounded.

They tend to be small in size and symmetrical.

Some examples of pompon dahlias are:

These resemble cactus dahlias but have very pointed petals that begin flat and roll for half their length.

They thus give both a spikier and fluffier appearance than cactus dahlias.

Some examples of semi-cactus dahlia are:

Perhaps the most simplistic in appearance, single dahlias have a central disc with a single outer ring of ray florets that may be rounded, pointed, and/or overlap.

Their more basic design makes them highly attractive to pollinators.

Examples of single dahlias include:

These flowers have a central disc surrounded by a single layer of ray petals which may curve inwards or outwards.

‘Alloway Candy’ is an example of a single orchid dahlia.

Boasting double, symmetrical blooms, the petals on waterlily dahlias have a slightly cupped to flat shape and tend to be only about half as deep as they are across.

Examples of waterlily dahlias include: