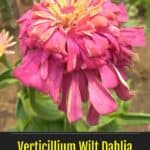 Dahlias (DAL-ee-a) are one of the most popular genera of flowering plants in the world.

With 42 species and more than 57,000 cultivars bearing the name, dahlia groups come in a seemingly limitless range of shapes and sizes.

Yet, while these plants tend to be hardy, they’re not immune from problems. One of the most dreaded of these problems is verticillium wilt.

Scientists are still trying to understand the details of this fungal infection. But one thing is sure: it’s a death warrant for any plant it infects.

What Are The Symptoms Of Verticillium Wilt?

There are many species of verticillium wilt, but perhaps the most prolific is Verticillium dahliae. Its name comes from its preference for dahlias.

This species doesn’t just affect the dahlia but also the other plants across more than 300 species in at least 14 different plant families.

Confusion in the naming and classification of verticillium makes it almost impossible for scientists to determine all plants a particular species infects. In some cases, it is difficult to know which species is present.

What scientists know is that verticillium wilt is highly opportunistic. It can affect numerous common plants, such as:

What Damage Does Verticillium Wilt Cause?

Verticillium wilt is a soil-borne fungus that infects the roots of plants.

The mycelia clot waterways in the plant’s root system, preventing the plant from drinking.

As a result, the plant begins to dehydrate despite plenty of soil moisture.

The first sign you’ll likely find of this deadly infection is a single branch beginning to wilt.

The leaves of the affected branch may begin to droop and dry out, yellowing in the process.

As the infection spreads to more roots, additional branches will become affected.

The veins of affected leaves will also appear blackened or brownish.

Infections are more common when cold weather suddenly becomes warm, but they are also commonly caused by infected soil.

How To Control Verticillium Wilt?

While there’s no cure for this deadly fungal disease, there are measures you can take to slow or stop its spread.

These methods can get expensive if you haven’t ensured there are no infected plants and haven’t taken steps to prevent another outbreak.

When potting a dahlia or any other plant, always make sure you avoid cheap potting mixes.

Companies often cut costs by not sterilizing the soil. It could arrive at your home or garden already infested with hibernating bugs and infected with bacterial or fungal disease.

Finally, while not an official method, you may wish to cover dormant dahlias if you expect a sudden thaw, so the ground warms up more slowly.

Alone, this won’t stop an existing infection, but it may help reduce the chances of a fresh one and help your dahlias avoid temperature shock.

Likewise, if you overwinter the dahlia tubers indoors, you may wish to cover the planting location. This allows less chance of sudden temperature shifts.