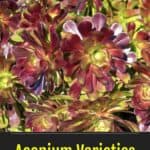 Aeoniums are also known as Tree Houseleeks. They come from a genus consisting of approximately 35 species of subtropical, perennial succulent members of the Crassulaceae family of plants.

Where Does The Aeonium Plant Originate?

These Crassulaceae family members are native to Africa, Madeira, the Cape Verde Islands, and the Canary Islands.

What Is The Origin Of The Name?

The name Aeonium (ee-OH-nee-um) comes from the Greek, “aionos” which means “ageless.”

How Are Aeonium Plants Used In The Home, Garden, And Landscape?

In cooler climates, these happy little plants can be grown as annuals outdoors or kept as container plants to be moved indoors for the winter. They do very well as potted plants and in dish gardens.

Do All Aeoniums Die After Blooming?

For the most part, Aeoniums are monocarpic. This means that they do die after their blooms die. Even so, this is not the tragedy it seems. Branching Aeoniums don’t flower on every branch, so the branches without flowers live to fight another day.

What Other Succulent Varieties Related To Aeoniums?

Aeoniums are members of the Crassulaceae family of plants, and so are quite a few other succulents. Among them are Sempervivum and Echeveria.

These plants look quite a bit alike, but they hail from different geographical areas, and they differ in their growth and blooming habits.

For example, Echeveria tends to be low-growing, and they are polycarpic. This means that they can bloom year after year without the parent plant dying.

Sempervivum, on the other hand, is monocarpic. It also differs from Aeonium in that it has sharp, pointed leaves with serrated edges.

How Big Do Aeoniums Grow?

The answer to this question depends upon the type of Aeonium. Some grow only a few inches high, while others may grow to a lofty six feet. Naturally, the ultimate size of any plant is also influenced by the care given.

When And How Long Do Aeoniums Bloom?

Generally speaking, Aeoniums bloom in the late winter to early spring, but some varieties do not bloom until summertime.

Typically, blooms last about a month from start to finish. There are many exceptions to this as some Aeoniums are monocarpic, and others are polycarpic.

Additionally, weather conditions and a wide variety of other factors may influence the time of year, the length of time, or even whether or not your plants bloom.

Outdoors, this fast-growing plant may grow to be six feet high. However, when kept in a container, it usually tops out at about three feet.

The plant produces bright green rosettes atop tall stems giving it the appearance of a succulent shrub or small tree. The green, shiny, spatulate leaves may also exhibit hints of brown or copper depending upon available sunlight and temperature.

The plant produces clusters of very small, star-shaped yellow flowers atop long stems, which emerge from the centers of the rosettes during late winter and early spring. After blooming has finished, the rosettes that have produced flowers will die.

This plant has a shrub-like growth habit and may grow a foot tall with a spread of two feet.

The spatulate, grayish-green leaves are edged in pink and grow in a rosette pattern. Rosettes may be up to four inches across.

This easily grown variety produces large, pretty blooms in the springtime. They are light yellow in the center and transform to shades of green and red as they mature.

The foliage of this pretty plant is variegated in shades of yellow, pink, and pale green. The leaves are typically striped green, yellow, and white with pink tips.

This plant grows to be one or two feet high and produces rosettes about a foot wide.

The small, unremarkable yellow blooms may appear in mid-winter or early in the springtime.

Also known as Aeonium arboreum Schwartzkopf. You may also see this name spelled in several other ways.

These plants may grow to be three feet tall in the landscape. However, if kept in a container, expect a shorter stature.

The spoon-shaped, mature leaves of the plant are deep purple and may even seem to be black. New, young leaves are green, but they will deepen in color if the plant is given ample sun.

This variety produces pretty yellow flowers in the summertime.

A healthy plant can attain a height and spread of two or three feet.

The plant produces very large rosettes that may be nearly two feet wide.

The bright green leaves of this variety are a bit furry and a bit sticky.

Fast-growing Cyclops may grow to be four feet high with an equal spread.

Rosettes may be eighteen inches wide. The spoon-shaped leaves range in color from pale green to deep maroon.

Black Rose is a variation on Aeonium arboreum Zwartkop.

Black Rose has a shrub-like growth habit and may grow to a height and spread of two or three feet.

Rosettes are full and dramatic with long, slim, deep red/maroon leaves that can be so dark as to appear black.

The leaves of this plant are a light shade of apple green. During the plant’s growing season, they remain tightly furled to create an attractive rosebud appearance. However, in the winter months, the leaves relax.

When mature, each rosette will produce a tall stem adorned with brilliant yellow flowers.

This interesting Aeonium has a palm-tree-like growth habit. Each plant produces a single, long-leafed rosette atop a strong, straight stem that can rise to a height of a little over six feet.

The long, slim, spatulate leaves are grayish-green with a pink edge. They form full, rounded rosettes that can measure a little over a foot wide.

Mature plants produce a large pyramid of small, star-shaped white or pink flowers only one time. This event happens in the summertime, and after the bloom dies, so does the plant.

This plant is just a few inches tall, but it produces a flat rosette that is the size of a dinner plate.

The leaves of the rosettes are green, rounded, and quite soft. But, unfortunately, they cannot tolerate harsh sunlight.

Flowering is unremarkable and occurs after the plant is more than three years of age.

Other Popular Aeonium Varieties include: