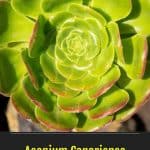 Do you love Roses? What if I told you that you could have a rose that might grow as tall as 3′ feet in height?

I am sure you think no rose grows like that, and you’re right. Except for Aeonium plants. Aeonium Canariense – the ‘Giant Velvet Rose’ is a succulent plant from the Canary Islands that grows as wide as 1′ foot and as tall as 3′ feet tall.

Characterized by large fleshy, velvety leaves that grow in a formation of green rosettes, the Canary Island Aeonium plant can add a terrific visual appeal to your succulent gardens.

And the best part, since Aeonium Canariense is succulent it doesn’t need as much delicate care. It grows well in sandy well-draining soil and is not always thirsty.

What Are The Best Lighting Conditions For Aeonium Canariense?

Although succulent, Aeonium Canariense does not enjoy direct exposure to the sun. It will have lovely green velvety fleshy leaves when grown in partial shade and will thrive and blossom with small, star-shaped flowers in the winter and spring.

The Aeonium Canariense is a unique succulent. It goes almost dormant during the summer and flourishes during the cooler temperatures ranging from 64° – 75° degrees Fahrenheit (18° – 24° celsius).

The fresh green color of the Aeonium Canariense will turn a reddish or a pinkish tinge when grown under or exposed to direct sunlight.

On prolonged exposure to sunlight, the leaves curl up, trying to reduce the area of exposure, which will, in turn, save the amount of water lost.

How Much Do I Need To Water My Aeonium Canariense?

This is a drought-tolerant plant, but be careful. Again, the Aeonium Canariense isn’t like other succulents.

It has a shallow root system and needs water more often than other succulent plants in its family.

If you live in an area with considerable moisture in the summer, you won’t need to water much.

The water requirements during the growing season are once every week or two, depending on the air’s moisture and surroundings.

In the winter, you can water based on how dry the soil is. Water the plant if the soil is dry when you poke in a finger.

What Is The Best Soil For Aeonium Canariense?

Aeonium Canariense like sandy loam or bagged soil for succulents. But add more perlite to your mix as your Aeonium Canariense requires the soil to hold some moisture. Be sure not to confuse moist soil and wet soil.

If grown in the garden, be sure to check the soil density. Otherwise, the Aeonium Canariense makes an excellent aesthetic companion for your decks and patios as a potted plant.

What Else Does My Aeonium Canariense Need?

Aeonium Canariense does not require much pampering. But it is important to remember that this plant doesn’t need much fertilizing; feed it once every 2-3 weeks during the growing season with liquid fertilizer at half-strength.

The Aeonium Canariense is a salt-tolerant plant and is practically pest and disease-free. But if you want your velvet rose to blossom, you must care for it.