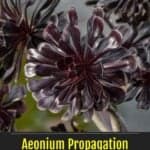 So you’re interested in Aeonium propagation, the unusual succulent plant genus hailing from the Canary Islands.

Succulent Aeonium plants often resemble shrubs or bushes, but their claim to fame is their unusual foliage.

Unlike your pothos, the leaves of aeoniums aren’t large and flat. Instead, they’re small, slightly puffy (to store water and nutrients), and have a habit of growing in tight rosettes that make them look more like rose or gardenia blooms than leaf clusters.

These attractive plants can become rather expensive, depending on the species you want and availability.

Instead of buying more of the same species, why not propagate the Aeoniums you already have?

With over 35 known aeonium species, it’s no surprise that propagation can vary slightly.

Here’s what you need to know to successfully cultivate both the branching and nonbranching species.

Division is perhaps the easiest method of propagation. It’s only possible to take cuttings from branching species. This propagation method is good to learn if plants get root rot from excess water.

After about 3 to 4 weeks, your new aeoniums will have developed strong enough roots to handle regular watering.

At this point, water liberally and allow the well-draining soil to dry to the touch two inches down before following the normal watering routine for that species.

Aeonium Varieties to Grow and Collect

This is a more advanced technique that only works on branching species. It is best done during a planned repotting to cause minimal stress to the mother plant.

Once you’ve removed the plant from its container, check for an outlying branch that leads directly into the taproot.

Using a sharp, sterile knife, gently start cutting from where the stem meets the taproot straight down.

The goal is to cut only a sliver of the taproot directly connected to that stem without damaging other branches or the rest of the taproot.

Plant this cutting in a fresh pot, following the same soil and watering methods used with Aeonium cuttings.

Propagating a dinner plate aeonium or similar nonbranching species is a little tougher, as these lack the stems needed for other propagation methods.

Instead, you must wait for your aeonium to flower and harvest the seeds once the flower dies.

Place the seeds in a paper bag and allow them to dry.

Fill a shallow nursery container with your 50/50 mix and scatter the seeds evenly across the soil when ready to sow.

Top with a layer of mix approximately twice the thickness of the seeds.

Cover the tray with a piece of plastic wrap to ensure the soil stays moist and put in bright indirect light, misting the soil when it starts to dry out.

Once the seeds germinate, you can remove the plastic wrap.

Gently prick out each plantlet once it’s reached ½” inch in diameter and place it in a 2” inch pot with the same soil height.

Give plants 6 hours of sunlight (indirect) per day or place them under grow lights.

This is a more bizarre method of propagation best used for specimens such as Aeonium arboreum ‘Zwartkop’ and is a form of pruning similar to taking stem cuttings.

It makes a fun statement if growing these plants near a Brunnera macrophylla ‘Queen of Hearts’.

As they grow, these species will lose the lower leaves, resulting in a bare stem. You can cut off the rosette (AKA beheading) the same way you would propagate through a normal cutting.

However, on the right species, this method has some extra bonuses.

Beheading that plant will help delay or prevent blooms on species that die after flowering, as the plant will first regrow the rosette.

The new rosette will develop closer to the ground when cutting part of the stem off while beheading (as much as 7 to 8” inches on particularly scraggly specimens).

There is also one other difference between beheading and a normal stem cutting, which is the fact that this method can be used to save a plant that shows signs of blooming on other branches.

Method #2: Leaf Propagations – Not So Fast!

Some varieties, such as aeonium ‘Suncup,’ it is claimed can be propagated by making leaf cuttings instead of stem cuttings. However, most who try have little if any success!