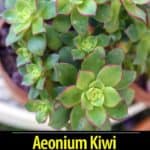 Kiwi Aeonium haworthii [ee-OH-nee-um, hay-WOR-thee-eye] is native to the Canary Islands and Morocco but now grows in areas with similar climates, such as Southern California.

In temperate regions, it makes a great houseplant.

Aeonium plants belong to the Crassulaceae (stonecrop) family of succulents and the genus Aeonium.

The kiwi variety is unique for its kiwi-colored rosettes, providing strikingly bright color to any porch or balcony throughout the year.

Kiwi Aeonium, is a drought-tolerant evergreen shrub-like plant with clusters of small rosettes from the Aeonium genus.

Kiwi is a hybrid of the popular Aeonium haworthii succulent, but its exact origin remains a mystery.

Aeonium kiwi is a sub-shrub, meaning it only produces woody growth near the base and doesn’t get very tall.

These succulents typically only reach about 2’ – 3’ feet with an equal spread. The plant produces multiple rosettes, each measuring about 3” – 5” inches.

The spoon-shaped leaves appear dark green near the base and lighter near the top with the upper leaves achieving a kiwi-colored appearance.

The edges of the upper leaves at times have a reddish or purplish color. The kiwi Aeonium, doesn’t follow the same growth cycle as most succulents.

The active growing season is during the winter and remains dormant during the spring and summer.

These plants display yellow flowers in the summer. They appear in clusters and don’t produce a noticeable scent.

Kiwi Aeonium is winter hardy in USDA hardiness zones 9 to 12, covering parts of the Southwest.

Grow in full sun or partial shade, whether grown indoors or outdoors.

When growing the plant indoors, place near a bright spot without direct sunlight.

If possible, move it outdoors for the summer months.

Allow the soil to dry out between watering but check regularly.

Due to the small, shallow root system of the kiwi aeonium plant, it requires a little more water compared to other succulents.

Avoid pouring water over the plant when watering. Water the soil to keep the rosettes from getting oversaturated.

If the soil becomes waterlogged after watering, add organic matter or pumice to improve drainage.

Transplant every few years to freshen the soil or when the plant outgrows its container.

The plant only grows as large as the container allows. If the plant doesn’t reach the full size of 2’ – 3’ feet, move it to a larger pot.

As this drought-tolerant plant ages, the upper leaves may start to fall.

This eventually results in a leafless stem. Cut the denuded stem below the lowest leaves. Toss the stem or use it to propagate the plant.

Propagating Aeonium plants is easy from cuttings or offsets.

A stem cutting provides the easiest method for propagation.

The cuttings may take root any time of the year but propagating in the spring or summer provides faster results.

After about four weeks, the cuttings should take root and start producing new growth — transplant to new plants to their permanent containers.

Propagating with offsets is also easy.

Aeonium kiwi is virtually disease and pest free and not known to produce toxic effects.

However, aphids and succulent mealybug pests may occasionally attack the plant.

Spray cold water on the plant to get rid of aphids.

Use cotton swabs dipped in rubbing alcohol to remove the mealybugs.

If these methods don’t work, treat the plant with an insecticide such as neem oil.

Aeonium kiwi is an excellent choice for succulent gardens or rock gardens.

Thanks to its striking colors, it also looks great on its own in a container near a window or on a porch.