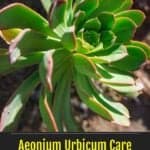 There are plenty of great succulent plants and varieties of Aeonium out there. But Aeonium urbicum (ee-OH-nee-um UR-bee-kum), sets itself apart for unusual-looking plant fans.

Aeonium urbicum is known as the salad bowl and saucer plant. This perennial member of the Crassulaceae comes from the Canary Islands of Tenerife.

It has previously been referred to as Aeonium pseudourbicum and Sempervivum urbicum among botanical circles and has even been broken into two varieties: var. urbicum and var. Meridionale.

While it has a rather impressive floral display, Aeonium plants are monocarpic and kept primarily for the foliage.

Be warned that hybrids are often sold as Aeonium urbicum, but may be distinguished by the lack of stems, have a branching habit, or display blooms of only a few inches in height.

One of the biggest aeoniums out there, your saucer plant can reach an impressive 6′ feet tall.

The plant rarely branches instead of growing its foliage on single stems.

It’s a slow grower and best known for its 2 to 3 rosette-shaped leaf clusters measuring between 13 and 20″ inches across.

These waxy, fleshy leaves tend to be a bright green color, but they’ll take on a deep red tinge at the tips when the plant’s stressed.

As mentioned, this is a monocarpic plant, meaning the mother plant will die after blooming.

Bloom time happens in the spring, at which point a pyramid-shaped inflorescence appears that measures around 3′ feet in size.

The flowers themselves are tiny and star-shaped with pink to white hues.

They appear in the hundreds and last throughout the summer.

The mother plant will also die once the flowers have died out, usually fading to a greyish or black color.

As with most succulents, too much direct sunlight can easily scorch the leaves.

However, this plant can handle full sun in mild climates, preferably in the morning or evening, if it has shade during midday.

Bright, indirect light will bring out its coloration the best, but it can also survive in partial shade.

You can plant this aeonium species outside USDA hardiness zones 9b to 11, but avoid leaving it in temperatures below 50º degrees Fahrenheit.

Ideally, your saucer plant should be kept in temperatures between 65 and 75º degrees Fahrenheit when growing indoors.

The plant is neither cold-tolerant nor heat tolerant and should be protected from drafts or extreme heat sources.

It will often go dormant during excessive heat periods and excessive water loss may cause the plant to dehydrate, the leaves to curl.

Like most succulents, your saucer plant does well in dry conditions. When watering it is best served using the soak-and-dry method.

Use the finger test to check soil moisture and water when it’s dry 1″ inch down.

Pour room temperature distilled water or rainwater evenly around the base of the plant until it begins seeping from the container’s drainage holes.

This method not only prevents the plant from getting wet soil, which can lead to root rot and death, but it can also flush out mineral wastes accumulating in the soil.

Cut back on watering during the plant’s dormant period.

NOTE:  Aeoniums have shallow root systems. Do not allow the soil to completely dry out.

You should give your salad bowl a feeding every two weeks throughout the growing season using a balanced liquid fertilizer diluted to half strength.

Stop feeding in the autumn.

A good succulent mix (well-drained soil) will work wonders for this plant, as well as cactus mixes.

Just be sure you choose a humus-rich potting mix and well-draining with a mildly acidic pH of 6.1 to 6.5.

You may also wish to amend the soil with a little compost and/or perlite to ensure the best environment possible.

Repot your aeonium every 2 to 3 years, giving it fresh soil when you do.

Prune away any damaged or diseased leaves as needed.

As spring is blooming time, you may wish to harvest some cuttings from the mother plant if it’s old enough to bloom.

The salad bowl Aeonium is easy to propagate using leaf or stem cuttings, seeds, and offshoots. Details on Aeonium propagation are here.

This succulent is drought tolerant and fairly resistant to most common problems.

However, aphids, mealybugs, slugs, and snails can be a problem. Control using Neem oil or insecticidal soap.

Squirrels and birds also have a habit of nibbling on this plant if grown outdoors.

Root rot is the single biggest killer of this plant.

Despite the nickname of “salad bowl,” this aeonium is toxic to both pets and humans.

Grown outdoors in groups, the Urbicum salad bowl will resemble a shrub, giving it more versatility.

While not heat tolerant, they can handle drought conditions, making them a good choice for arid environments.

Finally, they make for an excellent indoor display, although they might not reach their full height.