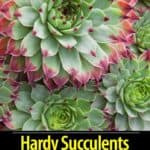 At one time or another – perhaps in childhood – all of us have seen or owned a plump green rosette of rubbery maroon-tipped leaves known as “hens and chicks” or, to be more specific, Sempervivum.

Besides, most gardens can claim some little rubber-leafed creeper called stonecrop or sedum.

Few of us, however, have enjoyed or even realized the fascinating range and beauty included in these two plant groups.

Because of their natural fat, juicy leaves, they are numbered among the succulents, but (unlike most succulents) they perfectly winter outdoors without protection in the most severe climates.

Hardy succulents include many excellent subjects for the rock or wall garden, and certain of the most delicate and well-behaved are delightful treasures for the miniature garden.

Tall sedums are at home in the border. The compact clump-forming sorts along with the larger sempervivums are ideal for edgings along paths, terraces, and a patio.

There is hardly a place in America where the vast majority of hardy succulents cannot grow easily.

For all sempervivums and many sedums, the essential requirements are perfectly drained soil in full sun or light shade.

Under favorable conditions, they are almost indestructible. The name sempervivum means “live forever.”

Even if your entire garden is lightly moist and semi-shaded, you may grow sedums, for there are many varieties which require such conditions.

Succulents Have Beautiful Flowers, Too

Foliage is the primary feature of most sempervivums and sedums, but many are capable of offering colorful clusters of star-shaped blooms as well.

However, a few mat-forming sedums are left bedraggled by profuse flowering, and a lean diet which discourages blooms is best for these.

Before sempervivums show their exotic yellow or red blooms, it may take two or three years in a favorable location.

Flowering brings death to the rosette from which it comes but offsets will soon take its place.

Propagation is easily accomplished by division. Cuttings are also a simple method of propagation for most sedums.

Seeds of all but a few common kinds are difficult to obtain.

On account of misunderstanding and a few sinners in their ranks, the sedums have fallen victim to bad publicity which they do not deserve.

It all goes back to the hasty, inexperienced rock gardeners who mixed certain rampant growing sorts with delicate alpines only to find they had nothing but a stonecrop tangle.

The environment caused the issues.

These same weedy sedums grow to good advantage as ground covers in hot and dry or lightly shaded places where it is difficult to get anything else to grow.

Among the best varieties for this purpose are the ubiquitous one-inch gold-starred Sedum acre, which is better known as “gold moss,” and Sedum sarmentosum, a graceful arching subject much like a taller, oval-leafed version of the former.

Its blooms, which can be profuse, come in flat creamy clusters in June. Sedum gracile suggests a bronzy form of Sedum acre with cream stars.

A less common kind is Sedum monregalense which has two-inch stems crowded with minute racket-shaped leaves topped by cream bloom.

All of the preceding are called stem-rooting because any stem brokes off will soon root itself in soil and start a new plant.

It is because of this mastery of multiplication these kinds of hardy succulents are the most widely known.

The remaining varieties form a majority and as a whole are very respectable and orderly.

We group these into the following three categories:

Its huge glowing heads of crimson are the splendor of September, and its rich gray foliage is always pretty.

Sedum alboroseum is like a smaller, earlier pink-flowered stonecrop with white variegated leaves.

S. kamtschaticum variegatum is a marvelous form of this with pink and white colorings on the leaves. No one should be without it.

Sedum populifolium is grown mainly for its clumps of heavily scalloped leaves.

Once you have set eyes on Sedum sieboldii in fluffy pink September bloom with its glaucous red-rimmed foliage, you can well understand the reason for its popularity.

In extreme northern areas, its blooms and those of Sedum spectabile Autumn Joy may be nipped by an early frost.

Of the few sedums which offer cut flowers are Sedum pruinatum and Sedum stribrnyi which differ mostly in foliage.

Each has bright golden heads on six-inch leafless stems above what resembles a massive glaucous club moss. In S. stribrnyi, this takes a uniquely distinctive form.

Similar in habit is Sedum reflexum cristatum which is characterized by strange comb-like growths in its deep green foliage.

These last three mentioned sedum varieties are evergreen in habit.

Among the small upright mat formers is Sedum anglicum minus, barely a half-inch high.

In June it has pink stars on stems massed with leaves the size and shape of pinheads.

A similar form is Sedum bithynicum. It is considerably larger, about two inches high, with gray foliage and more linear leaves.

Sedum lydium is a knobby red-green offering, which with Sedum bithynicum, unlike most sedums, prefers light shade.

Much larger, but still very low because of prostrate habit, are Sedums floriferum, stoloniferum and spurium coccineum, each with its sprawling brown stems and flat, broad leaves.

Sedum floriferum has the distinction of being refreshingly evergreen and has yellow blooms, while Sedum spurium coccineum is a startling dragon’s blood red in foliage and flower.

Also similar to these but with higher stalked pink blooms and distinctive gray leaves is Sedum Ewersii.

Sedum sexangulare looks like rather tall “gold moss,” but don’t be frightened by its outward resemblance.

A sheep in wolves clothing, it has none of the bad habits of its double. It always stays tidy and compact with little care or attention.

An unusual form of propagation is displayed by S. stenopetalum.

It looks like huge “gold moss,” but this variety forms small rootless plants in its leaf axils which, after flowering and death of the parent, drop to the ground and start the yearly cycle anew.

Aristocrats among the sedums are of small size.

A good example is Sedum dasyphyllum with its constricted mat of blue-green, pink beads, which is so unique it hardly looks like a plant at all.

While this is a sun lover, there is a similar variety with somewhat flatter leaves, Sedum Leibergii, which requires semi-shade.

Sedum cauticolum, another favorite, is like a dwarf Sedum sieboldii with earlier, darker blooms.

Not unlike it, but distinct is the more prostrate treasure listed as Sedum Eversii var. homophyllum.

For the shadier garden, no foliage is more brilliant than the sprawling crimson rosettes of Sedum spathulifolium purpureum.

It has yellow clusters in June. Another form of the same, Sedum spathulifolium, has green, red-edge leaves.

Of like description is Sedum ternatum which is of more brownish color and likes semi-shade.

A little bundle of always fresh green leaves like flattened sausages identifies Sedum oreganum, while Sedum globosum looks like the same reclining for a nap.

In the manner of a tightly shrunken Sedum Stribruyi with a lemon color bloom is Sedum anacampseros.

Sedum rupestre minus suggests a much smaller form with less constriction. Sedum Lemon Ball has chartreuse to a blue-gray hue.

Sedum Middendorfianum has similar foliage form but otherwise is in a class by itself. Its rich chestnut color makes it a curio in the garden.

You may also like: Anacampseros Rufescens the Sand Rose

As delightful as the sedums are, there is another great branch of hardy succulents – the sempervivums.

Many people have never become enthusiastic about hens and chicks because they have seen only the common  Sempervivum plant ‘tectorum’, and assume there are no others.

The fact is the other varieties are now relatively rare, but they need not remain so for they are of the most carefree culture and are not difficult to obtain from several reliable nurseries.

Of one thing, however, the buyer must beware.

The names of sempervivums are a little confusing. Order only by names which the dealer describes or pictures to be sure of getting the kinds you want.

To many, the most striking sempervivums are the “cobweb” types – the basic and most common being Sempervivum arachnoideum (cobweb houseleek).

Its half-inch red rosettes wholly covered with a maze of white filaments which may be emphasized by the addition of lime to the soil.

There is a dainty miniature form of this called Sempervivum arachnoideum minor. It is identical except for the fact that it is only about one-half the size.

In addition, there are a great many larger cobweb types.

A very deep red one commonly called Sempervivum ‘Beta’ is over one-inch across.

Another sort, Sempervivum Pilosella, is a medium size in green-pink.

A sizeable number of sempervivums, including most of the larger ones, are relatively hairless.

Among these are ‘Rosy Purple,’ a remarkable beauty measuring to four inches across.

In this class also are variously named bronze-purple-red blends.

In the same size range is a very distinct clear green type with rosettes sharply and tightly incurved to form a ball.

One called Sempervivum globiferum is further characterized by bearing the chicks on top of the plant.

Allied to it in habit is a smaller sort with mahogany green colorings.

Other sempervivums in the medium size range have a velvet-like texture, the gray-purple prize Sempervivum ruthenicum or the fuzzy gray Sempervivum Pittonii.

Small furry sorts include one in brown-pink sometimes called tomentosum.

Also belonging to the hardy succulents are and Cotyledon (Bear’s Paw) and Gormania which are much like medium size broadleaf sedums.