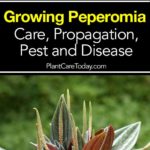 The world of peperomia plant care comes in many looks. For example, some Peperomia varieties you’ll find at the local garden center in the indoor tropical plants section are labeled as baby rubber plants.

Other varieties of peperomias are strictly for hobby collectors.

Peperomias like Peperomia obtusifolia have long been favorite indoor houseplants. Its popularity is due to their adaptability to the house’s atmosphere, attractive foliage and compact growth habit.

Peperomia is a perennial related to pepper plants. It comes from a large South American family (about 1,000 species in the Peperomia genus, a few from Africa). The name alone means “the plant related to the pepper.”

Unique, succulent leaves, bushy uprights, or rosettes make many peperomia types attractive as indoor plants and are fun to collect.

Popular Varieties Of Peperomia Plants Include:

Generally, any of the 1,000 – relatively slow-growing – peperomias, along with the many cultivars, only achieve an overall maximum height of 10″-12″ inches high.

The flowers sit on long flower spikes covered closely with very tiny flowers that have no scent.

Peperomia plants are easy to grow in the house. They are called radiator plants due to their easy care and from sitting on the home radiator. They like warmth but do not need high humidity.

They like bright indirect light conditions but do not need direct sunlight.

Peperomias do not like deep shade or direct sun, two very big extremes. So grow peperomia plants somewhere in between (bright indirect light is perfect), and you’ll be fine.

With insufficient light, Peperomias will grow weak and get leggy.

Peperomia Care Tip: Watch out for over-watering your plants. Water plants every 7 – 10 days should be enough, depending on the time of year and temperature.

Peperomias resent overwatering and will rot off at the base. Therefore, I like to allow the soil to dry completely before watering again. This will greatly help prevent roots from rotting, aka root rot.

Peperomias are not heavy feeders. Therefore, apply a diluted balanced liquid fertilizer every 3rd time you water during the “growing season,” the summer months.

Generally, peperomias do not need repotting. They do better under-potted than over-potted. When growing, keep the pot size small. When repotting, use well-draining soil.

However, repot when the plant becomes too large for its pot. Using a well-draining potting mix (50% peat moss / 50% perlite).

At any time of the year, if your plant gets scraggly or out of hand, it may require pruning.

The leaves, growth, and foliage of the baby rubber plant come in many forms, including:

Peperomia Flower Spikes | Another one of the many good small indoor plants!

Propagating the baby rubber plant is as easy as taking a few tips, leaf, or stem cutting. Use a light rooting media and dipping the ends in rooting powder, tips, and leaves root quickly.

But, unfortunately, they can become straggly and “wild” over time.

Soil For Rooting Your Peperomia Plant

The soil type plays an important role in rooting peperomia plants. Since most varieties have small root systems, they make excellent candidates for dish gardens. Use a well-drained potting mix that gets lots of air.

Potting soil with a 1 to 1 mix of peat moss & perlite is simple and reliable for rooting and growing peperomia plants.

Most peperomia plants will propagate from leaf cuttings like African violets. The best time for peperomia propagation is spring, but you can root anytime.

Peperomia plants belong to a unique group of plants that have few pests or diseases attacking them. The greatest enemy is probably neglect. When pests like mealybugs, fungus gnat, and spider mite show up, we reach for the organic insecticide Neem Oil.

Read our Guide on Controlling Peperomia Pests and Diseases

However, peperomias do have a few disorders.

Fading Dull Leaves – When the fleshy leaves of peperomia plants have dull-looking leaves, it is usually caused by too strong light.

Discolored Leaves and Flowers – This condition usually happens from overwatering.

Remedy – Allow the potting mix to dry out and avoid getting water on the leaves, which can sometimes cause them to rot.

Peperomias are non-toxic, but what about cats? Details: Are Peperomias Poisonous to Cats?

Question: I had a stunted obtusifolia Peperomia plant that gradually wilted, withered, and died. There was dark stem rot at the soil line, and the roots decayed. I plan on buying another baby rubber peperomia plant, probably a variegated Peperomia obtusifolia. How can I avoid killing my future new plant? Libby Bismark, North Dakota

Answer: Libby, this sounds like a fungal disease. The cause comes from excessive watering of plants growing indoors leading to root rot. Make sure to plant peperomia in well-drained potting soil, avoid overwatering and never allow plants to sit in saucers with water, or root rot can become an issue. Also, the plant likes bright indirect light. If you keep the plant in a low light area, reduce watering.

Question: Can you tell me why the leaves of my large watermelon peperomia plant are dropping off? I’ve grown it as a houseplant for several years and would hate to lose it. Darcy Lincoln, Nebraska

Answer: Darcy, the leaf drop on your plant may be taking a natural rest and signals its need by dropping the older leaves. If this is the case, do not water as often and withhold all plant food until new growth is obvious.

HOWEVER… If it has not been repotted in fresh potting soil in a long time, this may be the time to repot.

Be certain that the base of the plant has not rotted.

If this happens, the ends of the stems where they join the base of the plant turns to watery, tan-colored mush.

Peperomia plants sometimes rot in this manner when overwatered, especially in soil that does not drain readily through drainage holes in the pot.

Your houseplant was originally potted in spongy, loose soil. However, the soil breaks down into smaller particles and compacts over time, reducing its ability to properly drain water.

If you diagnose the trouble as stem rot or root rot, spread a newspaper out on your kitchen table, tap the plant and soil out of the pot.

Shake the soil away and wash roots clean so you can determine what portion of the plant has rotted and what part is still healthy.

Using a sharp knife or pruning shears, salvage the parts of the plant that have not yet rotted.

Peperomia plants form many rosettes of leaves as they mature. To root one of these, remove the lower leaves and dust the cut portions with a rooting hormone (such as Rootone if you have it), and insert in moist, fresh soil.

Placed back in a window with indirect sunlight and with proper care, the cutting should produce roots quickly and form a handsome new plant with leaves in a few months.