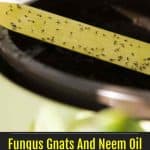 Quite a few common plant pests find their way indoors. Few are as annoying and destructive as house fungus gnats.

These tiny insects resemble mosquitoes but are poor fliers and won’t attack humans.

Instead, they get their name from a diet of fungus, leaves, and decaying organic matter, making your houseplants so attractive to them.

Fungus gnats only live for about a week once they reach adulthood. But it isn’t the adults that are the concern.

A single female can lay up to 300 eggs! They hatch into larvae with voracious appetites and can harm seedlings and chew up a plant’s root system.

These pests feed on compost, mulch, and other things your plant may also need, and it’s not always possible to remove any decaying organic matter.

Instead, indoor plant enthusiasts have been turning to neem oil as their crucial remedy against this frustrating pest.

How To Use Neem Oil To Control Fungus Gnats

Neem oil is an all-natural, non-toxic insecticide that kills many pests on contact, including fungus gnats.

To deal with this particular threat, a neem soil soak or neem cakes are perhaps the best remedies out there.

What Is Neem Oil?

Neem oil is the MacGyver of the plant care world and is available in a crude (or raw), clarified hydrophobic, or cake form. It’s made from crushing the seeds of the Azadirachta indica tree.

Details on: What Is Neem Oil?

Azadirachtin has a chemical composition like that of key insect hormones. A harmful pest that ingests it may stop eating, fail to reach the next developmental level, or be unable to lay eggs.

Raw neem oil is most effective when cold-pressed, as it loses potency in heat. The resulting solids are neem cakes.

Neem cakes contain trace amounts of Azadirachtin and are often used to supplement or replace compost due to the rich organic content.

This latter form also has trace amounts of Azadirachtin. It is usually sold in concentrations of .5% – 2% percent and the primary ingredient in most commercial neem oil foliar sprays.

It has the added ability to clog the airways of any insects it comes in contact with, suffocating them. It is a powerful contact fungicide as well.

A soil soak is what it sounds like – a diluted mixture of crude neem oil that’s poured over the soil and absorbed by the plant’s roots.

Making a neem soil drench is very simple and has a shelf life of about four days, but an active life once applied of up to 22 days.

Gently stir 1 teaspoon Dawn dish detergent into a gallon of water to serve as an emulsifier (i.e., it allows the oil and water to mix). Then add 2 tablespoons of 100% percent cold-pressed raw neem oil.

Pour 2 – 4 cups of the mix directly onto the soil in your containers when it’s time for the next watering. Make sure to test with a tiny amount a day beforehand to ensure the plant has no adverse reactions.

Azadirachtin is a powerful systemic insecticide, killing grubs beneath the soil and being absorbed by the roots.

Over the next three weeks, any fungus gnats unlucky enough to bite into the plant will ingest the toxin.

As this treatment won’t harm your children or pets, it’s safe to use as a preventative once you eradicate the initial infestation.

Creating neem oil leaves behind no waste. Investing in a few neem cakes is an excellent way to treat any houseplants that need a lot of organic matter.

Break up the Neem cakes and add them into new potting soil or gently mix them into the top layer of a container’s existing soil.

Adult and larval fungus gnats will consume the Azadirachtin in this excellent compost as they attempt to eat the seed solids.

The plant may absorb the Azadirachtin during waterings, giving it a little extra anti-pest boost.

A Note On Foliar Sprays

Foliar sprays are a great pick when fungus gnats are attracted to a fungal infection. But the gnats need direct contact as the clarified oil dissipates without residue in 45 minutes to an hour.

You also have to soak all surfaces of a plant, which can be difficult with dense houseplants.

You may wish to give foliar sprays a pass when dealing with fungus gnats, due to the drawbacks.

If you choose to use it to combat fungus, we suggest picking up an all-natural spray, such as Bonide Ready to Use Neem Oil Spray.