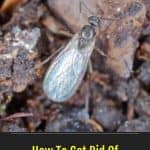 Most of the household infestations facing plant enthusiasts involve piercing insects and arachnids.

Aphids, spider mites, and other common pests tend to reside on the undersides of leaves, where they can be easily spotted and treated.

Fungus gnats are a completely different threat, however.

Adult fungus gnats only live for about a week and will flitter about being a nuisance, but they’re more of an annoyance than a threat at this stage.

The real danger lies in their larvae, which burrow into the moist soil and devour fungus and mold, often munching on plant roots around the organic matter in the process.

Here are three easy ways to treat these pests when they’re still underground, as well as tips on how to prevent future infestations.

How To Get Rid Of Fungus Gnats In Soil

These remedies may be used separately or together, but each has its advantages and drawbacks.

When used properly, neem cakes are an excellent natural preventative and treatment.

Neem cakes are the solid waste left over from cold-pressing raw neem oil.

The cakes contain trace amounts of neem oil and are simply broken up and sprinkled on or mixed into the soil.

You can use neem cakes as a fertilizer or supplement, and most brands have a 4-1-2 NPK ratio.

Neem cakes will kill fungus gnats both in containers and outside.

However, the downside is the fact that this is technically a fertilizer.

You’ll need to balance the neem cake with other fertilizers to achieve the proper NPK requirements for each plant.

There are few things more wonderful than neem oil.

100% percent cold-pressed raw neem oil is widely available and non-toxic to humans and pets in moderation.

The plant’s roots absorb the soak where it becomes a systemic insecticide.

Any insect which bites or pierces the plant will ingest some neem that mimics an insect’s hormones.

Affected bugs will suffer a loss of appetite, infertility, and nymphs will be unable to reach adulthood.

Meanwhile, you can harvest from a treated plant as soon as one day after treatment.

To make a soil soak, mix one teaspoon of Dawn dish soap or pure castile soap into a gallon of water, then add 2 tablespoons of raw neem oil.

Pour 2 to 4 cups of the mixture directly onto the soil around the plant, being careful not to get any on the plant itself.

The soak will be effective for up to 22 days and may be reapplied every 21 days as a preventative.

The downside to this treatment is that some plants are sensitive to neem and may have an allergic reaction.

Testing a small portion of the plant for 24 hours will help reduce the risk of reaction.

For naturally sensitive plant species, be sure to check whether the plant has a known intolerance towards neem before attempting to use.

Avoid using neem oil close to inhabited water features, as it is toxic to some aquatic life.

Finally, apply the soak to outdoor plants at dawn or dusk to minimize the risk of beneficial insects coming into contact with it.

Diatomaceous earth (or DE for short) is a natural substance made from the crushed fossils of diatoms.

This product lacerates the waxy coating over a bug’s exoskeleton, causing them to lose bodily fluids and die of dehydration.

It will kill both adult fungus gnats, which try to land on the ground, and larvae, which break the surface.

Food grade DE is completely safe and non-toxic to humans and larger pets, but it’s best to wear a mask when applying so you don’t inhale the dust.

Tips on How To Use Diatomaceous Earth on Potted Plants

Simply dust the surface of the soil with a thin layer of food-grade DE.

The soil surface must be dry at the time of application.

The downside to using diatomaceous earth is its incompatibility with water.

If applied to the damp ground, it’ll be ineffectual.

Additionally, DE washes away easily when it rains, or you water the plant.

Finally, this method will take several days up to two weeks to be truly effective, as it’s a contact killer, and the victim dies slowly.

One of the best ways to get rid of fungus gnats is to not get them in the first place.

All three of the above remedies are also effective at preventing infestations.

Fungus gnats are attracted to damp soil, so be sure not to overwater your plants.

Let the surface of the potting soil dry between waterings unless the plant specifically needs to be kept damp.

When you spot fungus gnats, immediately isolate any infected plants, if possible, to prevent the adult gnats from laying eggs on other plants.

NOTE: Other remedies to control gnats and larvae include apple cider vinegar, a sticky trap, and a DIY fungus gnat trap.