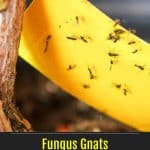 The infestation of fungus gnats in your garden or home is one of the most irritating and frustrating problems you have to deal with in a responsible manner.

Belonging to the Sciaridae family, fungus gnats are tiny, black flies often found hovering over the pots of houseplants.

Problems with fungus gnats are not restricted to your garden.

If you bring a plant infested with fungus gnats to your indoor garden, your house will be at risk of facing the irritating infestation.

What Are Fungus Gnats?

Both adult fungus gnats and the larvae are quite detrimental to your home garden as they destroy the plants very quickly if you leave them untreated.

It is through the larvae of fungus gnats the pest wreak havoc.

Once fungus gnats hatch, the larvae will get attached to your plant roots and deprive them of nutrients.

If you have any decaying organic material (dead leaves) in your houseplant, adult gnats will find it and get attached to it.

They also look for moist organic matter such as peat moss, wood chips, and compost for laying eggs.

This is why it is crucial to ensure you haven’t overwatered the plant.

What Damage Do Fungus Gnats Cause?

Since the larvae will deprive your plant roots of its nutrients, your plants will possibly die.

Adult fungus gnats carry deadly fungus diseases which can have a negative effect on your health as well.

How To Control The Fungus Gnats Pest

Keeping in view the damage these creepy, little buggers cause to your plants, it is crucial for you to learn some tried-and-tested methods to get rid of the fungus gnats infestation.

Here is what to do to get rid of this most common indoor plant pest.

Even though some argue it is more difficult to get rid of and infestation of fungus gnats than the fruit flies infestation, from natural ingredients such as neem oil and apple cider vinegar to DIY vinegar traps, there are many effective ways to control the infestation.

You don’t need a green thumb to effectively control the gnat infestations.

Another easy method to get rid of fungus gnats is by using or creating sticky traps. Pin
Buy Now
If you click this link and make a purchase, we earn a commission at no additional cost to you.

This is done by smearing Vaseline on a 4″ x 6″ inch cardboard.

Then, on the top surface of the potting media, place the card horizontally to enable it to catch the adult insects as they jump from the potting soil.

In the same manner, insert a yellow trap vertically to catch the incoming whiteflies and gnats.

Another method to get rid of the fungus gnat infestation is through food grade diatomaceous earth.

This mineralized food dust contains shards of silica that shred any insect which flies through them.

If you mix the dust at the top of the soil or into your potting mix, the dust will even kill the larvae of fungus gnats which come in contact whit it.

When working with DE, it is recommended you wear a dust mask.

This is because inhaling the dust could be detrimental to your health.

Related: Tips On Getting Rid of Flies in Potted Plants | Hydrogen Peroxide for Fungus Gnats

Here are some of the most common and effective biological controls for fungus gnat control.

Another effective treatment of killing adult fungus gnats is by sprinkling weak chamomile tea on the plants.

Brew a quart of tea and then add it to 1-gallon watering can.

Use the mixture whenever you are watering the plant.

Sprinkle it on the surface of the soil to kill the larvae and disrupting the lifecycle.

Often referred to as Bti bacillus thuringiensis var israelensis is a naturally occurring bacteria-killing different types of worms, insects, and larvae. For more on Bti check out our article on using Mosquito Dunks for fungus gnats. Pin
Buy Now from Amazon
If you click this link and make a purchase, we earn a commission at no additional cost to you.

Steinernema feltiae is the type of beneficial nematodes which is used to kill the fungus gnat.

These worm-like creatures first enter the larvae and then release a bacterium which proves to be quite lethal.

Dice the raw potato into big blocks and bury them just beneath the soil surface.

Wait for four to eight hours and then pull out the chunks of the potato.

If the infestation is heavy you will see the flies crawling on the potato.