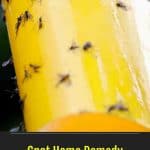 Plant pests are one of the most common types of household infestation.

Look just about anywhere online, and you’ll find a small library on how to deal with aphids, mealybugs, plant scale, or spider mites.

But there are one species that tends to be more common than all the above yet is addressed far less often.

This is the infamous fungus gnat.

The term fungus gnat actually applies to a whole host of species in the Sciaroidea superfamily.

As adult gnats, they’re completely harmless to everything but your sanity.

However, a single female fungus gnat can lay up to 200 eggs during her one-week lifespan, and these eggs hatch into hungry little larvae.

The larvae are the real problem, as they will often gnaw on plant roots while feeding on fungus and mold.

This damage isn’t usually enough to hurt a plant but can become serious with a large infestation or if the plant is already sick.

As they love fungus, plants suffering from root rot are especially vulnerable.

It’s a sad fact that commercial soils often contain fungus gnats, so it’s important to have solutions at the ready at all times.

Thankfully, you can effectively combat this pest without the need for harmful chemicals.

What Are Some Home Remedies Getting Rid Of A Fungus Gnat Infestation?

There are a lot of easy home remedies, most of which require items you probably already have laying around.

Here are just some of the many quick and easy remedies available:

This species of beneficial nematode is a great treatment for house plants that need consistently moist soil.

Simply add these natural predators to the damp soil, and they’ll attack by burrowing into the larvae and releasing a bacteria which digests the victim from the inside out.

This once-expensive spice is a great repellent against many critters and can even kill some pests, such as fungus gnats.

Sprinkle a thin layer of cinnamon on the soil surface.

Not only will this kill the gnat larvae, but it’s also an effective fungicide.

Often referred to as simply DE, this remedy is actually the crushed remains of diatom fossils.

Sprinkle a thin layer of Diatomaceous Earth on the soil of potted plants when it’s dry to the touch.

The fragments will cut through a pest’s protective wax coating, and they will slowly dehydrate to death.

You will need to reapply DE every time you water the plant or it rains, and it’s best to do so every couple of days.

It can take a little while for the DE to eliminate the infestation, but it’s a cheap and highly effective remedy.

You’ve probably already made one of these before.

Simply take a 20-ounce soda bottle and cut the top off where it begins to curve, then tape the top upside-down into the bottom.

Fill it with apple cider vinegar and (if you so choose) a few drops of dish liquid.

The gnats (and fruit flies) will fly into the opening and get stuck because they can’t navigate the funnel shape, eventually drowning.

Chances are, you already have some horticultural sand around.

Unlike the common sand used in sandboxes, horticultural sand is often used as a soil aggregate.

It also happens to work well against fungus gnats.

Simply add ¼” inch of horticultural sand on top of the soil, and it will discourage the gnats from landing or laying eggs.

In the garden, this household and bathroom chemical is extremely useful.

In fact, you should be using Hydrogen peroxide on indoor plants regularly.

For those who aren’t using peroxide regularly, you can make a surface spray that will kill fungus gnats and their larvae on contact.

Simply take 3 cups of distilled (AKA baby) water and mix in 1 cup of hydrogen peroxide rated at 3% percent or higher strength.

Spray the mixture directly onto dry soil and repeat daily until the infestation is gone.

Fungus gnat larvae are an important part of the exosystem since they help control fungus, mold and also break down organic matter.

That’s not to say you want them near your plants, but having this knowledge gives you the means to trick them.

Slice up some raw potato and lay the slices on the infested soil.

The gnats will be attracted to the potato and will burrow up for a bite.

Keep an eye on the slices and replace them as they become infested until all the larvae are gone.

Of course, no true Irishman would waste a good potato like this, but it’s still a great way to slowly extract an early infestation.

Test a small portion of each plant to ensure it isn’t allergic or overly sensitive.

After 24 hours, pour 2 to 4 cups of the mixture per plant around the roots, avoiding splashing on the plant itself.

This treatment can be reapplied every 21 days as a preventative.

One of the easiest methods is to pick up some yellow sticky traps from your local supermarket or hardware store.

Adult fungus gnats are attracted to the yellow paper and will quickly get themselves stuck.

This remedy won’t kill larvae, so you will need to leave the strips up for about a month to get the eggs and larvae when they reach adulthood.