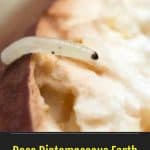 Nobody wants flies in their house, especially tiny gnats. Unfortunately, this is a common risk when you have houseplants.

Fungus gnats are a group of tiny black gnats belonging to the Sciaroidea superfamily that feed mainly on fungus.

They often infest house plants that have been overwatered, in very moist conditions or have been infested by other pests such as aphids.

The real problem lies in their habit of nibbling on your plants’ roots while foraging for fungus.

As the larvae like to burrow into the wet plant soil, a lot of popular pest control methods won’t work.

But what about the classic soil remedy, diatomaceous earth?

The good news is, good ol’ diatomaceous earth (or DE for short) is an effective remedy against fungus gnats.

The bad news is you’ll still have the little buggers flying around for a week or two.

What is Diatomaceous Earth?

For those living under a rock, you might already be quite familiar with DE, but for those not in the know, diatomaceous earth is an all-natural, non-toxic pest killer.

It’s made from the crushed fossils of diatoms, a prehistoric, microscopic lifeform.

Due to their small size, DE feels more like very fine sand or powder to the touch but will feel like broken glass to smaller critters.

DE has been used as an effective deterrent for rodents and is a natural killer of insects and arachnids.

The sharp fragments of fossilized shells lacerate a bug’s exoskeleton, causing it to leak bodily fluids until they dehydrate to death.

While adult fungus gnats are only a danger to your sanity, the ability for an adult female to lay up to 200 eggs can create a more severe problem.

She lays them in the soil close to surface level during the single week she’s alive.

These eggs then hatch, and the larvae burrow down into the soil.

Once there, they will feed on any fungus or organic matter, including plant roots.

However, to fight the true threat, you have to treat the soil itself.

This is where DE comes in. Allow the soil mix to dry out before applying the DE, as it loses its effectiveness when wet.

Once the potting soil has had a chance to dry, sprinkle the DE directly onto the soil, giving it a thin dusting.

When adults land on the soil surface or the young attempt to break through the soil, the DE covers them in cuts that will soon kill them.

Many plant enthusiasts also recommend sprinkling DE under a container so bugs won’t get in through the drainage holes.

As the DE only affects fungus gnats as they try to pierce the surface of your plant’s soil, the process can take a while to fully eliminate the fungus gnat population.

Be sure to treat your plants regularly to a preventative measure such as neem soil soaks or neem foliar sprays.

Piercing insects such as aphids and scale will leave behind partially digested sap known as honeydew.

This honeydew attracts ants and can also lead to fungal infections such as sooty mold if not cleared away.

Isolate any plants which have a fungal infection.

The fungus or mold itself may not transfer to other plants but will attract fungus gnats.

The gnats will lay their eggs not only at the affected plant but any other ones nearby.

Additionally, overwatering can lead to root rot, a common infection that can be bacterial or fungal in nature.

Root rot draws fungus gnat larvae to the roots, where they’ll do even more damage than the rot alone.

Only water your plants when needed and use the finger method to test when a plant is actually in need of watering.

Finally, your plant may be under the weather after the infestation is gone. Make sure to place it in a location where it can get the ideal conditions (light and temperature) and ensure it’s being fertilized properly during the recovery process.

You may choose to occasionally dust the plant with some DE as another preventative, but remember that dusting will be washed away at the next watering or rainfall.