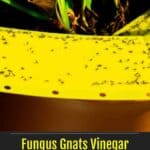 Fungus gnats and fruit flies come from the same family. They are small flies that often develop in houseplants. They feed on organic matter, plant roots and fungi.

Although the adult fungus gnats don’t bite, they are a nuisance, creating small clouds of bugs around plants. The question often asked is: Does vinegar kill gnats?

What’s more, the adult flies may spread from plants, going to inhabit your garbage cans, and also sitting on unrefrigerated fruit. So, again, this poses a potential sanitation problem.

Further, the fungus gnat larvae can cause damage to plant roots. As such, it’s best to address any sign of fungus gnats as soon as possible.

Can You Get Rid of Fungus Gnats with Vinegar?

Yes, you can eliminate fungus gnats with vinegar. After making a vinegar solution, you can set up a trap to lure them away from your plants and eliminate them as pests.

How to Get Rid of Fungus Gnat Infestation with Vinegar

You don’t have to throw a plant out because of a fungus gnat infestation. There are ways to treat these pests naturally. Follow these steps for an effective fungus gnats vinegar solution.

Fungus gnats love moist soil. They feed on the decaying plant matter and fungi found in the ground. The first step in keeping fungus gnats at bay is to avoid overwatering your plants.

This helps to reduce fruit fly populations, ensuring your vinegar solution trap doesn’t immediately get overloaded when you set it up.

If you already have fruit flies, you can use a fungus gnats vinegar solution to trap and kill them. Fruit flies rely strongly on their sense of smell to find food. Vinegar is a particularly pungent substance and contains a great deal of acetic acid, which makes it tempting to fruit flies.

Pour one-half inch of apple cider vinegar into a semi-opaque or clear plastic cup. Next, add one to two drops of liquid dish soap and stir the mixture thoroughly.

Since fungus gnats are so small and delicate, they can technically walk across the surface of a liquid (like vinegar) without breaking it and sinking.

The dish soap breaks the liquid’s surface tension. As a result, the gnats can’t walk on water and instead break the surface, fall into the liquid, and die.

Add Fruit to Your Vinegar Trap

If you want to make your fungus gnat vinegar trap even more appealing to the pesky critters, you can add a piece of ripe fruit. A ripe cantaloupe or banana is a great pick. Make sure it’s positioned in the liquid so that it sticks out from the surface a bit.

The fruit will let off a more potent smell than the vinegar. This will attract adult gnats more quickly than vinegar alone.

Finally, cover the top of the cup with clear tape. Leave an opening in the center that is about one-eighth of an inch in size. That’s about the size of a pen tip.

This is your fungus gnat trap. The pests will be drawn to the vinegar-soap-fruit solution, creep into the cup to get a sniff and a snack, and then get stuck.

Place the vinegar trap next to your houseplant where the gnats are congregating. Make sure it’s on a stable, flat surface, away from pets and kids. You don’t want to risk spills.

You can also set some yellow sticky traps in the surrounding area. This will help catch any hovering adult gnats. As the sticky tape gets full, replace it.

Check and Rinse Your Trap Regularly

Check daily to see how your trap is working, but don’t disturb it.

If you touch it, you may scare away gnats congregating on top of the taped portion. You have to give them time to find the small hole and make their way to the vinegar below.

As the trap becomes full, you may have to empty it and start fresh. When you pour out the soap-vinegar solution, make sure that all fruit flies inside are dead before washing them down the drain.

You should see fewer and fewer fruit flies in your vinegar trap as time goes by.

There is another way you can check for a fungus gnat infestation. Take a raw potato and cut up a few small pieces. Place them in the plant’s soil.

After two to three days, check the potato pieces to see if they have been nibbled on at all. If so, you still have fruit fly larvae and adults to deal with. Maintain your vinegar traps.

Also, make sure to remove any debris from potted plant soil. Old leaves the plant has dropped will decay and attract fresh fungus gnats.

Removing such debris also keeps mold and mildew at bay, which can otherwise cause a bad smell.

To answer the question: Does vinegar kill gnats? Yes, with a vinegar trap!