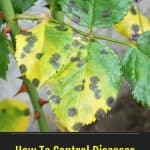 Despite their popularity, roses have long been considered one of the higher-maintenance plants out there.

Perhaps this is why they are so important in the Language of Flowers since so much effort was needed to grow them, and avoid the thorns just to give one to someone you love.

But Knockout Roses have kept the beauty without all the fuss.

These hybrid rose bushes are extremely low-maintenance and lead a carefree life in your garden alongside the new creeper Drift roses.

That’s not to say these plants are perfect, and this is where many growers end up with a rude awakening.

A growing number of deadly rose diseases are now spreading to Knockout Rose varieties, which were once thought to be either immune or highly resistant to these threats.

While a lot of common rose conditions remain unable to affect Knockouts, there are a few that have adapted and are now spreading throughout the Knockout Rose community.

These diseases currently include black spot, rose mosaic, and rose rosette, but other common rose diseases may adapt in the future.

Black spots on roses are caused by the fungus Diplocarpon rosae, this curable disease can still be a heartbreaker if left untreated.

It begins by appearing as little black spots on your Knockout Rose’s leaves, slowly spreading throughout the plant and to neighboring bushes.

As the spots take hold, yellow rings will form around their edges, eventually causing the leaves to die and fall off.

While the fungus mainly targets foliage, it can also spread to the canes, although there are no reports of it affecting rose blooms.

What makes this fungus particularly frustrating is that it can spread to the soil or non-rose plants (which will remain asymptomatic carriers) through leaf litter and compost, and the spores may be spread via wind and water.

The good news is this fungus is easily treatable with a little time and effort.

Always water plants in the morning since the fungus will only sprout after seven hours of continuous exposure to moisture.

Quite a few chemical and organic treatments are available, including some organic methods you may already use elsewhere.

A spray made of 1 part milk to 2 parts water will change the fungi’s pH, killing it.

Neem oil is also quite effective, especially when used as a soil drench with foliar sprays being used to target visible outbreaks of fungal diseases.

Rose mosaic virus is caused by several different virii, this disease is most often transmitted by aphids, which unwittingly carry viral loads from one plant to another.

The main visible symptom is a jagged or mosaic pattern of yellow and green on the infected leaves.

These markings are most notable in spring but may fade by summer, leaving the grower to believe the infection has gone.

In some rarer cases, the blooms will also become stunted or distorted.

The virus is easily transmitted by humans through grafting, and there’s no known treatment or cure for an infected plant.

Because the virus doesn’t kill its host, growers will sometimes ignore its presence as long as the blooms aren’t affected.

The only truly effective means to prevent its spread is to uproot the infected bush and discard it, soil and all, in a safe manner.

The rose rosette disease is an incurable virus. It is a virtual death sentence to your Knockout Rose and is spread through the tiny Eriophyid mites (Aloe mite).

Once infected, the plant will have a reaction similar to psoriasis, where new growth will be fast and remain bright red.

Leaves on infected stems will fail to unfurl, giving them a trademark rosette appearance.

While infected canes on the diseased plants may have blooms, the flowers will be deformed or may fail to fully develop.

Pruning away the infected shoots several inches below the end of the healthy green cane can sometimes stop this rose rosette virus before it infects the rest of the plant – IF caught early enough.

However, this virus is deadly, and there’s currently no available treatment or cure, so it is generally best to uproot the whole plant, discard it and the soil, and wait two full years before planting another rose in that location.

Because viral and fungal infections are constantly adapting, it’s best to follow a few simple practices to ensure your Knock Out Rose bush isn’t affected by the next adaptation.

Begin by pruning back the bush by ⅔ in late winter to remove any overwintering pests and encourage healthier spring growth.

During the growing season, use a neem soil root drench every three weeks on your roses (be sure to test for sensitivity first!).

The plant’s roots will absorb the neem oil and use it as a systemic insecticide which can also fight many forms of internal fungal and bacterial infection.

When pruning, always keep your tools sterile, dipping them frequently to avoid hitchhikers.

Finally, give your plants regular checkups.

Examine the leaves and canes for any signs of something abnormal, and while you’re at it, talk or sing to the plant (the carbon dioxide you exhale when doing so will give the plants a happy little boost).

If you see any unusual bugs, spots, or other abnormal symptoms, try to make sure the plant isn’t touching its neighbors. Do your best to identify whether the symptom is a threat or simply a sign of neglect or too much attention.

Remember, Knockout Roses are very low-maintenance and disease resistant to most common rose ailments, but they are NOT maintenance-free or immune to all diseases.