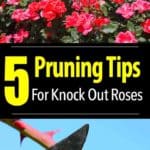 Do you know how to prune knockout roses? The family of Knockout® roses is one of the hottest plants to hit the market in the last few years.

The Knock-out rose like others enjoy the rose growing basics:

Like most roses, aphid attacks do occur on Knockout’s from time to time.

In some states like Florida with mild climates, these landscape roses bloom almost year round.

Knock Out® rose bushes are great for homeowners who love roses blooms but do not want the upkeep a shrub rose requires. They do not have a strong fragrance or last long as cut flowers.

Details on How Long Do Knockout Roses Bloom?

Generally growing 3′ – 5′ feet tall and equally as wide. They look their best after pruning knockout roses in spring!

We’ve put together a collection of mostly videos from experts providing many tips on general pruning of Knock Out’s… large, small, selective and more.

Before we get to the videos, let’s answer the “when” question about Knock Out roses and pruning.

When Is The Best Time To Prune Knockout Roses?

The “when to prune knockout roses” depends on where you live. In the south, they can be pruned (this includes Double Knock Outs) almost at anytime. However, as a general rule the best time to prune a Knock Out rose shrub like most roses is in early spring.

Using sharp sterilized pruners like these, cut out, prune and remove any broken canes, stems or dead wood due to winter storms to get them ready for the growing season.

Pruning roses comes with some preparation, like getting your tools ready. Getting the timing right plays an important part.

In the first video, Brad from Fairview Garden Center discusses as he calls them “the crazy popular Knockout Rose.”

He helps answer the questions of:

Brad starts with the tools for the pruning job.

When to cut back knockout roses?

Brad discusses two pruning methods. First, you’ll learn about what Brad calls “heading back” which is a light pruning, reducing plant size by about one third in size. The second method Brads refers to as rejuvenating.

The rejuvenating method effectively greatly reduces the size of the Knock Out rose to roughly six to eight inches above the ground.

The video shares some good close-ups showing exactly what and how to prune!

In this video Steve Hutton from Star® Roses and Plants/Conrad-Pyle breaks the Knockout rose pruning process into 3 simple steps to make sure you achieve the best results when pruning your roses.

Step #1 – answers the question – When to trim knockout roses?

Should you be pruning knockout roses in fall?

The simple “general” answer. Prune your rose bush in late winter or esrly spring, never in the fall and never in winter.

Wait for spring. Look for little sprouts of new growth coming out of the rose stems. These sprouts are this years growth. When you see these sprouts reach about a quarter or half an inch in size it’s time to prune.

Work backwards! Determine how high you want your rose bush to finish. If the height is 3 1/2″ feet or 42″ inches. Remember, that a rose shrub will roughly triple in size with new healthy growth during the spring and summer growing season.

This means you’ll need do major pruning to remove dead and old growth of the Knock Out bush back to about one foot.

Clean up the debris and you’re done. get all the details in the video.

Melissa Allman shows how to prune the stems of a large Knock out bush. Check out the review of our favorite hand pruners.

One nice tool she used was the adjustable lopers to help get into hard to reach places to keep your hands and arms away from the thorns.

She also slipped on a jacket for the long sleeves to provide some extra protection!

Related Reading: More On Care Of The Knock Out Rose bush

Melissa says… “Selective pruning on very large Knock Out Roses is not scary… except for the thorns.“

In this video Melissa Allman takes her pruning shears and looks at selective pruning of Knock Out roses stressing:

Should you be pruning knockout roses for winter?

She even offers some tips for protecting roses during winter.

In this video, P Allen Smith shares his love for roses and especially the longtime favorite with gardeners –  Knockout Roses.

He likes Knock Out’s for:

He gives key techniques in the care of your rose garden, so you have beautiful Knock Out’s all season long.

In the video P. Allen shares the art of deadheading and taking out the old flowers. For more blooms he removes all the buds and prunes the plant back. Details in the video.

After pruning he likes to put fertilizer around the plant and water to soil to keep it consistently moist.

He also stresses these important care tips for Knockouts:

Yolanda Vanveen a third-generation flower grower shares how Knock Out’s are a great addition to a garden or the end of a driveway where they can just grow!

But when it starts to overgrow, you’ll want to prune them a bit. This instructional video gives directions on how.

As with the other experts Yolanda recommends ONLY pruning in early spring before the plant begins really growing.

She likes to prune out the suckers during the growing season as they can take over especially with bigger plants.

She also likes to prune out spent flower clusters to encourage new growth and more flowers.

As a “pruning rule” she shares to only prune back NO MORE than 1/3 of the plant at one time.

Some parts need careful precision, while others you can pretty much go in and start hacking away to clear out clutter. Watch the full video here, and get pruning!

Knock-Out Roses make wonderful additions to the landscape. However, to make them really stand out you’ll need to learn and apply some general pruning. It’s time. Sharpen those pruners and let the cutting begin.