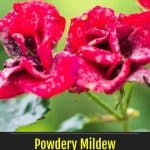 If you’re serious about keeping your Knockout roses in excellent condition, familiarize yourself with their common pests and issues. Black spot and powdery mildew are common rose diseases many rose gardeners encounter, so it may help to start here.

What Is Powdery Mildew?

This fungus spreads in the air and can be challenging to prevent or avoid.

When spores land on a moisture-rich area, like a freshly watered soil bed, they spread.

Before you know it, the plants in your garden could look like a baker has attacked them. They may have a white, powdery, almost flour-like coating on the tops of the rose leaves.

It tends to start as small white dots before spreading into blobs. Even after your garden has dried out, this fungus can eat away at plant matter, causing everything to die.

Because it’s nearly impossible to avoid, powdery mildew claims thousands of dollars in vegetation each year. It may also cause a small amount of damage to a person’s immune system when consumed.

What Damage Does Powdery Mildew Cause?

Appearance isn’t everything. Plants with fungal spots and spores can be dangerous.

Consuming fungal molds isn’t particularly good for you. If you eat vegetables with powdery mildew you could suffer an allergic reaction and feel ill.

Powdery mildew isn’t suitable for your plants either. It can slow their growth and prevent them from flourishing and thriving.

Because powdery mildew doesn’t immediately kill the plants it infects, some gardeners may attempt to ignore it.

Fungal spores don’t just go away. Some can survive in the soil for up to half a century. So any future plants nestled into that spore-filled soil will develop powdery mildew.

And because you’ve given the spores a new food source, they’ll reinfect the underlying soil. This process could continue forever without intervention.

If you can remove all affected plants, do so. Picking away infected leaves during dry and cool times of year may stop some powdery fungus. But this is rare.

In most cases, removing affected plants and placing them into compostable trash bags or burning them is necessary. Otherwise, the offending fungus will continue to reappear year after year.

The total cost of these potential damages is impossible to determine. Ridding yourself of powdery mildew on roses can be incredibly frustrating.

How To Control Powdery Mildew On The Knockout Family of Roses

You may have some success with controlling powdery mildew if you grow your plants inside an airtight greenhouse.

But, most home gardeners don’t have a glass plant paradise. So put other precautions into place to avoid molds and mildews.

Avoid overhead watering, which refers to the act of watering your plants at their tops. This act could encourage mold and mildew growth.

Water at the soil, taking extra care not to overwater. Try to avoid watering directly at the plant stems and base. Instead, make circular motions several inches away from the plant. This will prevent excess moisture near the plant while also encouraging more vigorous root growth.

You may also want to choose plants that are naturally resistant to mildew. Or, you could remove overhanging tree boughs to create a sunnier garden patch and increase air circulation.

Powdery mildew tends to shy away from areas that receive several hours of direct sunlight each day.

Placing your plants too close together can also make it challenging to resist powdery mildew. Be sure that each of your plants has plenty of room for air to move and circulate.

Your Knockout roses will appreciate the space.

Of course, if natural remedies don’t work, you could try a fungicide. Be sure to follow the instructions printed on the label. Chemical-heavy pesticides and fungicides can be harmful when incorrectly applied.