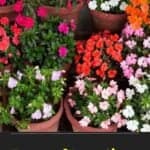 Impatiens is a large genus with over 1,000 species and (paired with the single species Hydrocera triflora) makes up the entire Balsaminaceae family.

The name impatiens (the Latin word for “impatient”) and the common name touch-me-not refer to the plant’s seed capsules, designed to eject their seeds at the slightest touch forcefully.

Both annual and perennial species are popular in gardens and containers, and hanging baskets.

Newer cultivars are more heat-tolerant, while older species and cultivars tend to be well-suited for partial shade.

Meanwhile, many of these plants, especially the North American species and varieties, have medicinal uses.

They’re used to treat bee stings, poison ivy, some forms of dermatitis (when prepared properly), and even natural nail polish in China.

Here is just a sampling of the most popular species of impatiens out there.

Only recently discovered in 2003, this Tibetan native is one of the more striking impatiens and promises to become a popular home and garden plant in the future.

The 2′ foot rounded shrub is a perennial in frost-free areas but a self-sowing annual elsewhere.

But the real show-stopper is the 1-1/2″ inch wide blooms, which change hue in response to environmental conditions.

The flowers will shift from true, vibrant blue to purple and have a yellow-orange throat.

This amazing species hails from a very limited range. It is available online in limited quantities that currently tend to sell out fast.

However, it’s easy to propagate more of this beautiful plant to fill your home and garden once you have one.

Often simply called impatiens, this species certainly is a busy one.

Growing 6 to 24″ inches tall, this African native can be seen in parks and gardens worldwide and is arguably the most popular species.

It’s frequently used in creating hybrids and compact impatiens, as well as dozens of cultivars, such as:

The only downside to this plant is that it’s more fragile than most impatiens, partly due to its semi-succulent traits.

Nicknamed policeman’s helmet in the UK, this species was introduced throughout the northern hemisphere, where it soon became highly invasive.

As a result, it’s currently banned in the EU and restricted in parts of the US.

Growing from 3′ to 6.5′ foot tall, its lavender to pinkish-purple flowers are pretty attractive.

Furthermore, its shoots, young leaves, green seed pods, and seeds are all edible and used in jams and desserts.

If you live in an area where this plant is permitted, it can be a wonderful addition to your home or garden.

Just be warned that there is some evidence the plant may excrete toxins that harm nearby plants to reduce competition in a phenomenon known as allelopathy.

There are a lot of pros and cons to this species.

Unfortunately, it tends to be rather leggy, is drought intolerant, and blooms somewhat irregularly.

As a result, it has become one of the most popular cultivars that take advantage of the positive qualities while reducing or eliminating the flaws.

Some of these cultivars include:

Also referred to as common jewelweed, orange balsam, and spotted jewelweed, this species grows to 3′ to 5′ feet tall and is a heavy brancher.

This North American species has been naturalized in many parts of Europe but has been proven invasive in Washington, where it has been overtaking local species.

This plant has one known natural hybrid with Washington and British Columbia native Impatiens ecornuta.

Its shoots are edible in moderation when cooked, as are the seeds.

Also referred to as garden balsam or regular impatiens, this native of India and Myanmar ranges in size from 8″ to 16″ inches tall.

It has spread to many Pacific Islands, where it has either naturalized or become invasive.

The main draw of this species and its cultivars is how the blooms often cup, causing them to resemble roses.

As its common name implies, this species has smaller flowers, although its height can range from 8″ to 24″ inches in height.

Native to the mountains of central Asia, it’s now considered invasive throughout most of the northern hemisphere.

Be careful growing this plant in the US, where it is considered a weed, as the seeds are easily transported and can cause it to spread.

However, the plant still has some merit as an indoor plant when caution does not let the seed pods mature.

With a scientific name that translates to the common name, this species might seem off-putting at first.

However, this is the only species native to Europe and may be where the genus originally got its nickname.

While not the most spectacular example of an impatiens, this species grows 1′ to 3′ feet tall and has yellow flowers with red spots on the interior.

As with many impatiens, the shoots, leaves, and seeds are edible, but no-seed parts must be cooked to eliminate calcium oxalate.

One of the more popular annuals in the genus, this plant can also be grown in USDA hardiness zones 5 to 9, making it an excellent choice for cooler outdoor gardens.

A wide selection of impatiens varieties is found in garden centers in many beautiful colorful flower shades.