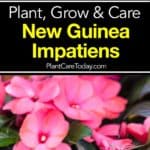 There are more than 1,000 different species of impatiens that make up all but one species in the family Balsaminaceae (the other is the monotypic, or single-species genus, Hydrocera triflora).

Out of this wide-ranging genus comes Impatiens hawkeri (im-PAY-shenz HAWK-er-i), commonly called the New Guinea impatiens after its native range of Papua New Guinea and the Solomon Islands.

After an initial failed attempt to introduce New Guinea impatiens to the US in the early 1970s.

The plant has become the source of numerous cultivars (Sunpatiens) and is now one of the most common species of impatiens throughout the US.

Some of these cultivars include:

These plants tend to be on the smaller side, usually only reaching a rounded 12″ to 18″ inches tall.

When grown as a perennial, the plant will last for several years.

It has larger dark green foliage when compared with the common impatiens, which are oblong to lanceolate.

The leaves of New Guinea impatiens may turn burgundy, stay a dark green, or have variegated foliage.

The leaves are arranged in an opposite or whorled pattern and have serrated edges.

New Guinea plant tends to bloom early, lasting from late spring through summer like a colorful annual and potentially everblooming when raised as a perennial.

Larger Flowers of New Guinea Hybrids: The colorful blooms, like the leaves, are larger than other common species and have 4 to 5 petals in an array of colors including:

This impatiens enjoys full sun to partial shade but will have fewer blooms if they get too much or too little sun.

A nice spot where the plant gets full morning sun and partial afternoon shade tend to work best for outdoor plants.

It’s possible to grow New Guinea impatiens as an outdoor perennial in USDA zones 10 to 12.

Avoid planting them outdoors as an annual until night temperatures remain above 45° degrees Fahrenheit.

Bring potted specimens indoors if the forecast is predicting a drop below 55° degrees Fahrenheit or any danger of frost.

Avoid allowing the soil to completely dry out, as this can cause loss of flowers and possible wilting. Overwatering can lead to root rot.

A good rule of thumb for potted plants is to wait until the soil is dry about 2″ inches down.

You’ll want to pour slowly, covering the whole radius of the pot, until water begins to seep from the drainage holes.

Feed your impatiens a complete water-soluble fertilizer in the lowest dose and rate listed on the package, preferably after watering.

For outdoor plants, go with slow-release fertilizer mixed into the soil when planting.

The pH isn’t important, although your impatiens will thrive when the soil has a mildly acidic pH of 6.0 to 6.5.

When planting outdoors, add plenty of compost or other organic matter to the soil and top it off with some mulch

If transplanting outdoors as an annual, make sure the plant sits at the same soil level as it did in its pot.

Perennial specimens will benefit from a soil change every other year.

Beyond weeding, this plant has low maintenance requirements when grown as an annual.

As a perennial, prune away dead leaves for a better appearance. Keep overgrown and leggy Impatiens plants compact with regular pruning.

How To Propagate Impatiens

Propagating this plant through seeds is generally discouraged if you have a cultivar for two reasons:

That said, stem cuttings of Impatiens are incredibly easy to propagate from, both from Impatiens hawkeri and from any non-trademarked cultivars.

However, overwatering can leave this plant open to several problems, such as fungal blight, powdery mildew, various forms of rot, and spot virus.

While the usual pests (aphids, mealybugs, etc.) can infest impatiens, they’re not a major threat.

As with all impatiens, touch-me-not are non-toxic to cats and dogs but may cause mild diarrhea and vomiting if humans or pets ingest the plant.

That said, the plant is edible if cooked properly.

The leaves are traditionally mixed with Plectranthus scutellarioides and used as a rub to reduce labor pains and are also cooked and given as a remedy for stomach aches.

When growing as a perennial, they look stunning in hanging baskets, planters, or on a shelf. As an annual, it’s perfect for seasonal flower beds and borders.

It also makes a nice houseplant if you have a sunny south-facing window with lots of bright sunlight.

Bringing your impatiens indoors during the wintertime is a great way to protect them, brighten up your home through the dreary winter months.