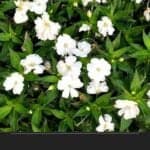 Impatiens are a reasonably large genus of plants containing 1,000 known species and several varieties and cultivars.

They are one of only two genera in the Balsaminaceae family and have global popularity among gardeners.

Depending on the species or location, impatiens tend to be either annuals or perennials, although many perennial species are grown as annuals and vice-versa under the proper conditions.

The size of an impatiens varies greatly from one species to another, which means they’re used in several different applications.

Smaller impatiens are grown and popular for borders and window boxes, while the largest species are often used around trees, and all species may be grown indoors if the enthusiast is too far north for outdoor planting.

But many popular houseplants are toxic in some way or another, either to yourself, your pet, or horses (which are becoming increasingly common as service animals).

And why might the answer be less apparent than a simple yes or no?

Are Impatiens Poisonous or Toxic?

The good news is, these plants are considered completely non-toxic to humans, cats, dogs, and horses.

Of these, cats and dogs may show some symptoms that have led many to believe their pet was poisonous, but the ASPCA confirms no harmful substances present in the plant.

What Parts Of Impatiens Are Thought to be Poisonous or Toxic?

The big misunderstanding revolves around the foliage of the plant.

When it comes to humans and horses, these leaves are completely harmless, although they taste bitter.

However, cats and dogs are primarily carnivores and have shorter digestive tracts, making it more difficult for them to digest plant matter.

Plants contain nutrients they’re not getting from dry packaged pet foods, which is why you’ll often see your cat or dog nibbling on grass or other greenery.

This is also why cards and dogs can develop allergies when eating dry pet food containing grains.

Humans, meanwhile, are least likely to go munching on the leaves, but they do enjoy the flowers now and then.

Impatiens flower petals have a sweet taste and are often used in salads or exotic drinks.

As mentioned, impatiens aren’t toxic, but they can produce symptoms in cats and dogs that lead many to believe the plant is.

These symptoms mainly occur when a cat or dog begins snacking too much on the plant and ingests a large amount of the foliage.

These leaves, while not poisonous, aren’t easy to digest.

As a result, your pet may suffer some gastrointestinal issues, such as diarrhea, nausea, and vomiting.

These symptoms only manifest if the leaves are consumed in excess and a nibble here, or there won’t have any side effects on your pet.

How To Protect Yourself While Handling The Impatiens

However, too much snacking on any plant can make your cat or dog sick.

You don’t have to worry about sticking your impatiens somewhere out of a child or pet’s reach unless they keep snacking on it.

If your dog or cat gets sick, and you can confirm the cause is an impatiens, there’s no need to take them to the vet.

Instead, have a look at your pet’s food and consider why they may be eating your plant’s foliage, which their bodies can’t digest.

It’s also cooked multiple times to make it shelf-stable, destroying most nutrition, which some companies try to replace using grains.

Thus, you may wish to consider switching to a partial or complete wet or raw food diet if your pet currently eats packaged dry foods and is constantly trying to eat your garden or houseplants.