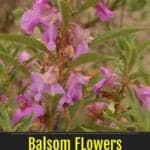 The Balsam flower variety came to Europe around the 16th century and was introduced to the United States by the early 18th century.

This camellia-like flower was quite popular in the Victorian era. Even today, the heirloom flower is much loved and admired for its exotic appearance and has been introduced in multiple varieties worldwide.

This hybrid annual goes by many beautiful names, such as:

The balsam plant grows best in full sun and partial shade. When the annual plant has the best growing conditions, it successfully grows to 12″-24″ inches in height.

It is an easy-to-grow plant as long as the plant receives organic and well-rich soil. The soil should also be moist at all times as it is essential for the healthy and nourishing growth of the plant.

Balsam bears double flowers, which make it look similar to camellias or the double hybrids of impatiens. The flower petals are soft like velvet and fully abloom in their growing season.

Unlike hybrid impatiens, this beautiful flower sprouts from seeds produced on the stem. The balsam flower is easily spotted from afar due to its bright red, pink, white, and purple colors.

Balsam is not just admired for its stunning range of hues but its pronounced leaves as well. Contrary to vivid blooms, the leaves of balsam are dark green.

They are narrow, faintly toothed, and have prominent veins. When balsam plants adorn the garden, they fill the space with beauty and an unforgettably sweet scent.

Ideally, balsam must be subject to hot and full sunlight. However, it does not require bright light. Generally, average room temperature is preferred for the healthy growth of balsam.

While balsam does not have high water needs, it requires thorough watering during the germination period. Keep the soil moist, especially in hot regions.

If the area where balsam plants are cultivated does not receive enough annual rainfall, water the plant with a watering pot.

During dry weather conditions, the plant needs to be watered once or twice a week. The roots should remain wet after watering. Apply a general-purpose liquid fertilizer weekly for optimum growth.

A balsam plant requires rich, well-moist soil and performs effectively in partial shade. When transplanting, the soil should be filled with compost, and clods must be torn apart.

Balsam plants need to be kept moist at all times. They will continue to thrive during the worst heat conditions only if they are adequately watered.

The plant should also be fertilized with a flower fertilizer every two weeks. Avoid the removal of seed heads. Instead, collect them as soon as they burst. Plant these collected seeds in other areas or save them for the next year’s cultivation.

How To Propagate Balsam Flowers?

Generally, balsams are grown from seeds. The flower seeds are planted in a flower garden or seeded indoors.

These balsam seeds are placed in trays or flats to make transplantation easier later on. Sowing indoors should start approximately six weeks before the winter frost.

After sowing the seeds, cover the place with 1/8″ inch of soil. Water the plant thoroughly to keep the soil moist.

Balsam will burst with flowers from early-middle summer to the last spring frost. A balsam plant takes 10 to 15 days for germination, so don’t forget to water the plant all this while.

Unfortunately, rose balsams are not immune to pest and disease problems.

Watch out for whiteflies and aphids. Apply an adequate pesticide to the plant daily and remove infested flower petals if you spot them.

Red spider mites may attack the plant due to its exposure to full sunlight and dry air.

The colorful flowers of Balsam plants are usually grown in parks and gardens to help elevate the beauty of these beautiful places. They also line flower borders, shady beds, woodland areas, and edges along walks and paths.

This annual is used in the form of hanging baskets and window boxes, which help beautify the décor.