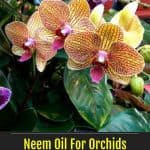 There’s no denying the draw of an orchid. The orchid has long been associated with sexuality (thanks to the Greek physician Dioscorides).

But more importantly, it can be a symbol of love, friendship, marriage, fertility, innocence, royalty, and more, depending on the color.

More interestingly, many of the 27,800 (and counting) varieties were eaten as an aphrodisiac.

But there’s one thing that makes this plant far less romantic when you give one to your partner – a pest infestation.

You don’t want to use harsh chemicals on this wonderful flower, but thankfully the gardener’s greatest natural ally, Neem oil, is a safe and effective pesticide when protecting these floral treasures.

How to Use Neem Oil for Orchid Pests

Using neem on an orchid isn’t much different than on other plants.

However, the orchid like the Phalaenopsis (moth orchid) can be a little more sensitive, so a few extra steps can be vital to a healthy plant.

Precautions with Neem Oil on Orchids

As mentioned, orchids can be a little more sensitive than some of your other ornamental plants.

The following considerations will not only keep your orchids happy and healthy but can be applied to other flowering plants as well.

Choosing the Type of Neem

There are three main types of neem, each with its own application and abilities.

Always make sure you buy cold-pressed, so it’s at the most potent and store in a cool, dry place.

Raw neem contains Azadirachtin, a natural insecticide that mimics the hormones of many insect species.

Used in soil soaks, the Azadirachtin becomes a systemic insecticide consumed by any pest that pierces or chews the plant.

Once ingested, Azadirachtin can block the appetite signals, cause infertility, and prevent nymphs from reaching adulthood.

Never use raw neem in foliar sprays due to the risk of chemical burns.

Neem cakes are the solids left over from creating raw neem.

These cakes have trace amounts of neem oil and Azadirachtin and commonly used as a supplemental fertilizer.

The exact NPK varies by manufacturer but is usually around 4-1-2.

Neem cakes won’t affect leaf-based pests but can be an effective barrier against grubs and other ground-based pests without harming earthworms.

Clarified hydrophobic neem oil is a modified form of neem where most of the Azadirachtin is removed for use in chemical pesticides.

It comes in concentrations of .5 to 3% percent Azadirachtin content.

We strongly suggest using the .5 to 1% percent for orchids to reduce the risk of burns.

Clarified neem is most often used in foliar sprays due to its gentler nature and suffocates any bug it coats.

NOTE: Avoid Dawn dish soap for orchids, as this may damage the wax if you use too much.

Stir 4 teaspoons of clarified neem into the mix and pour into a spray bottle.

We suggest using .5% percent as a preventative and 1% percent for most infestations.

Unless the infestation has spread to the flowers, try to put a piece of cardboard in front of them while spraying and work from the top down.

This will protect the flowers of more sensitive species while still getting most infestations, although thrips and a few other pests may also attack the flowers.

Repeat every other day for 14 days or until the infestation is gone.

Simply break up the neem cake and apply as instructed.

Remember that the cakes have NPK and are considered a fertilizer, so be sure to adjust your regular orchid fertilizer as needed to keep the proper NPK totals.

Neem soaks can last up to 22 days in the plant and won’t harm the wax coating or flowers. However, potting mix soaks are not the best option for some orchids due to their epiphytic qualities.

But, they are a great option for terrestrial orchids like Phaius and Bletilla.

Pour 2 to 3 cups of the mixture onto the soil directly over the roots, covering a roughly equal radius of the root spread.

Avoid splashing the plant itself.

The neem will kill ground pests as it soaks down without harming earthworms and will be absorbed by the plant to become a systemic insecticide that doubles as a partial fungicide with antibacterial properties.

Reapply every 14 to 21 days at watering time as a preventative or until the infestation is gone.

Neem oil is non-toxic to humans and pets, but you should still wait one day after treatment before making a bouquet, just if the recipient has an allergy or sensitivity to neem.