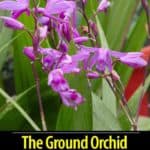 This plant is native to the Asian lands of China, Japan, Korea, and Myanmar, where it’s cultivated in abundance.

The plant is also known as the:

As for the botanical name, the epithet of the word striata means striped, a reference to the plant’s ribbed flowers.

As for the genus name Bletilla, it is in the honor of an 18th-century Spanish apothecary named Luis Blet.

In the right growing conditions and excellent soil, this terrestrial orchid plant (like the Phaius Nun’s orchid) is easy to grow and care for.

During winter the foliage dies to the ground. It is a long-lived plant and enjoys successive growth year after year.

It not only becomes stronger, but it also spreads in numbers due to self-seeding.

Orchids are one of the most loved flowers around the world. Chinese ground orchids are no different.

The pinkish-lavender cattleya like flowers are borne on racemes in the form of spike-like clusters during the late spring May-June season.

There are about three to seven flowers on the upper part. Each flower spike is about 8″ – 18″ inches in length and held above the foliage.

The hardy ground orchid starts blooming from the bottom and makes their way up with three or four flowers open at one time.

Every ground orchid flower has five petals and an undulating furrowed lower lip.

They are around 2” inches wide. The bloom time is quite short and lasts only a month.

Once the season is over, the purple flowers fall clean off the plant.

These perennial hardy orchids are recommended for USDA hardiness zones 5 through 9.

However, they may not do well in winter in Zone 5 areas.

Mulching with organic material like pine needles may work well.

As for light, hardy orchid plants respond well when grown in partial shade.

Morning sun in hotter climates is beneficial but it needs refuge from the full sun in the afternoon.

The plant has average water needs.

As it prefers moist soil, you need to make sure it doesn’t dry out in hot weather.

Check the soil between waterings.

On the other hand, overwatering may also be a problem.

Most plants don’t respond well to water standing around the roots for too long.

While ground orchids like rich soil, they are extremely sensitive to changes in fertility levels.

If the soil is naturally rich, the plant creates a successful symbiotic relationship with the fungus.

However, a slow-release fertilizer fed in early spring may boost growth.

The plant is suitable to grow in medium or loamy soils. Plant them in moist but well-drained, rich, and organic soil.

As for pH, the plant tolerates both acidic and alkaline soils well. Mulch the soil with organic matter such as pine needles.

This will prevent weeds from growing around the plant and also help retain moisture in the soil.

It should be done once the plants have flowered but are still in leaf.

Use some of the soil from around established plants. This will bring some of the bacteria and fungus to the transplant and help it grow.

When it comes to grooming, the B. striata doesn’t need to be pruned or sheared.

Brown leaves can be unsightly if left untouched.

The plant has specific watering and fertilizer needs.

Make sure you keep up with the information to grow strong and thriving ground orchids.

How to Propagate Urn Orchid

If using the seedheads, allow the seeds to ripen and then sow as soon as possible.

The seeds look like a tiny embryo. Sow the seeds on the surface, in individual containers and keep inside a greenhouse.

Make sure you water the plant regularly. Allow the seedlings to get established and grow large enough to be handled before moving them.

If propagating through division, it is best done in the fall. Each division you separate should have at least two to three pseudobulbs.

You may propagate further by cutting through the rhizome during the growing season.

As a side note, the Bletilla is considered one of the easiest orchids to grow.

While slugs and snails can be occasional visitors to the Bletilla orchids, use Diatomaceous Earth to help prevent damage.

Also, keep an eye out for glass whitefly, aphids, and orchid mealy bugs.

Otherwise, the plant virtually doesn’t have any serious pest or disease problems.

Orchids are known for their unique appearance and beautiful flowers.

In movies, TV shows, and other media outlets, orchids are seen being grown indoors.

They also are quite commonly given as housewarming gifts.

In locations north of the USDA Zone 5, the plant makes for an excellent container plant, especially in the winter.

However, the plant looks just as stunning when planted in gardens.

They grow well and look beautiful set against ferns in woodland-type areas.

In Asia, the plant is used for non-ornamental purposes.

For instance, it is used in traditional Asian medicine to treat various types of diseases.

The plant is also used to extract a natural glue to make silk strings for Chinese musical instruments.