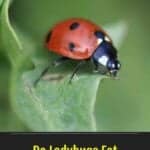 If you’ve read PlantCareToday.com for any period of time, you know how much we love natural remedies to plant problems.

Of these, one of the most common issues for both indoor and outdoor plants is pest control.

Fungus gnats are some of the most annoying. Although they don’t do as much damage as thrips or grasshoppers, they are a nuisance.

But not all bugs are pests, and one of the most beloved and common beneficial insects or natural predators is the humble ladybug.

These adorable little insects are known for their large appetites and taste for aphids and many other common plant pests as a food source.

So what happens when you decide to combat fungus gnats by introducing ladybugs to your garden?

As much as we’d like to give an emphatic yes, the truth is that ladybugs only eat adult fungus gnats.

This means that you can control but likely not stop a fungus gnat infestation using ladybugs alone.

Why Do You Even Have Fungus Gnats?

This is a Very Important Question (VIQ) that growers often forget to ask themselves.

Fungus gnats are so named because they feed primarily on fungus.

Thus, chances are the fungus gnats are a symptom, not the problem.

Check the humidity around the plant and make sure it isn’t too high.

Likewise, you will need to check the soil surface for obvious signs of fungal growth or mold.

There’s also a chance the fungus gnats have appeared because of fungal root rot, so be sure to check for any symptoms of this deadly disease.

Until you find the reason for your infestation, it won’t be possible to permanently get rid of the fungus gnats.

Ladybugs are some amazing predators. Ladybugs prey on other harmful insects like aphids, fungus gnats, mealybugs, thrips, and even some grubs and larvae.

However, the fungus gnat larvae are a little different.

Adult fungus gnats will lay eggs in the bare soil, and the resulting larvae remain underground where they’ll feed on your plant’s roots as well as any nearby fungi.

Only when they become adults do the fungus gnats emerge and expose themselves to the hungry ladybugs.

For this reason, it’s possible for ladybugs to help keep an infestation in check, but they won’t be able to eliminate it entirely as long as the females are able to lay more eggs.

Employ Ladybugs as Part of a Broader Cure

Just because ladybugs won’t eliminate a fungus gnat infestation on their own doesn’t mean they’re useless.

Quite the contrary, they will help cut down the adult population while you focus on the eggs and grubs.

Together, you can eliminate even large infestations in only a few weeks.

You can attract ladybugs by adding plants they like in the garden, and you can also order them online.

Just be warned: if the ladybugs don’t have a reason to stick around, they’ll abandon your plants and go elsewhere.

Dealing with the Source

Once your ladybugs are fast at work, you’ll need to eliminate any fungi that are attracting the fungus gnats.

Neem soil soaks can help your plants fight off fungal infections and can even kill some of the larvae.

You’ll want to treat any root rot quickly, as this can easily kill your plant.

Fungicides may also be necessary to deal with the fungal infection.

There’s one other tactic you can employ that will allow your ladybug allies to devastate the fungus gnat infestation: barriers.

Female fungus gnats need a place to land and inject their eggs into the soil, so what happens when they can’t reach that soil?

A layer of coarse sand can be a great barrier because it will allow water to soak through without letting the gnats through.

Another popular barrier is diatomaceous earth.

Food grade DE will lacerate the exoskeletons of any insect that comes in contact with it, but won’t harm your children or pets.

This remedy works best indoors, but can also work outdoors if you reapply it every few days.

The third barrier that outdoor growers often swear by is a mulch layer.

Pine needles or bark mulch can make it almost impossible for the fungus gnats to get in or out of the soil while also protecting the plant’s roots from frost.

It also allows water through and can be a little more attractive (and even slightly nutritious for your plants) than sand.

Just because ladybugs are the most attractive insect predator you can pick and can be released both indoors and out doesn’t mean they’re the only choice.

Many small bird species will feed on insects such as fungus gnats.

Likewise, another popular garden ally is the parasitic wasp, which lays her eggs on pests so the larvae can eat their host alive – gruesome but very effective.

Neem cakes make a great fertilizer and can kill grubs and underground larvae without harming earthworms or beneficial nematodes.

Finally, unless you have a plant that’s sensitive to neem, using a neem soil soak or foliar spray every two weeks can help protect your plants from many types of fungi, thus reducing the risk of a fungus gnat invasion.