One of the worst garden pest, the Japanese beetle feeds on a wide variety of plants.

In fact, they survive and thrive eating more than 275 different types of grasses, ornamental garden plants, vegetables, and fruit trees throughout the United States.

The sweet attractive smell of lilacs, morning glories, roses, and poison ivy are magnets for these garden pests.

Throughout their lifecycle, Japanese beetles cause devastation to plants. In the lawn grub worm phase, they devour plant roots.

Additionally, the fact that the white grubs make very tasty fair for a wide variety of natural predators such as possums, skunks, and other carnivorous and omnivorous mammals adds the secondary threat of destructive digging in your yard, garden, field or orchard.

When the Japanese beetle larvae transform and emerge from the ground as beetles, they set to work right away consuming the foliage of almost any plants they happen to come in contact with.

It’s easy to see from the beetle damage that these extremely hardy beetles present a real threat to the garden, but what can you do?

In this article, we will describe Japanese beetles and discuss some organic methods you can use to deter and/or eliminate them. Read on to learn more.

The first Japanese beetle was discovered at a Riverton, New Jersey nursery in 1916.

They have small white tufts on their sides and also at the tip of the abdomen.

In the spring, when the weather begins to warm these lawn beetle grubs move closer to the surface and the young white grub beetles feed the roots of plants.

In late spring/early summer (May through June) they emerge from the ground as adult beetles.

At this point, they take the next 4-6 weeks of their life to wreak havoc on plant life and reproduce.

The beetle population spends the first 30 days of this time as a feeding period pretty much-eating everything in sight!

In the late summer and early fall, the female beetles will lay eggs continuously until the first frost which signals their demise.

Details on When To Treat For Lawn Grubs!

It’s easy to see that your approach to controlling these beetles must be multi-pronged.

It’s necessary to control both during the grub stage and the adult beetle stage to make any headway at all.

Additionally, you should know, you will never be rid of them. Even if you were to kill off every single grub and beetle on your property, others would come next year.

Work on controlling them (rather than eradicating them) as the best and most realistic goal.

Your control methods will change from season-to-season as the beetle’s form changes. Several products and tactics have shown good results.

NOTE: The worst infestations and the heaviest Japanese beetle damage is found in states which border the Mississippi River and eastern states: Ohio, Georgia, Tennessee, and North Carolina.

Boost The Health of Your Soil

Amend your soil for optimum health. The regular addition of humus and organic compost will help improve the overall health and bioactivity of your soil.

This works to help keep plant roots healthy and strong so they can deflect pests. Grubs do not go after strong, healthy roots.

Reduce the Number of Grubs Naturally

It makes good sense to take steps for reducing the number of immature beetles while they hide in the ground.

This type of bacillus specifically kills Japanese beetle grubs. To use it, you simply apply it to the soil of your yard or garden early in the spring. Follow up with an even watering to help the powder soak into the soil.

The grubs eat the bacillus spores and will die within three weeks time. When the grub dies, it releases more spores affecting other white grubs.

This “natural” living organism form of pest control, continues to spread and effect the grub population for years on end.

With no negative effect on ornamental or food plants, no danger to humans, pets or native flora and fauna, this makes it a safe, natural deterrent for every type of crop. Only the Japanese beetle grubs find it lethal.

You can look for this garden product at home improvement centers and nurseries, or you can order Milky Spores online from Amazon. 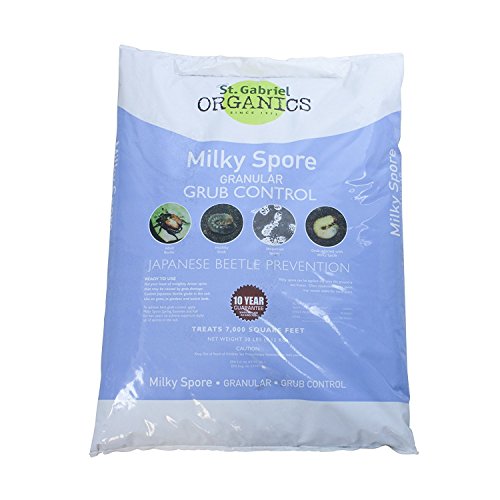 Click To Learn More | Buy from Amazon
Learn More
If you click this link and make a purchase, we earn a commission at no additional cost to you.

You can improve the performance of “milky spores” by including beneficial nematodes in the water you use immediately after application of the bacillus. These microscopic insect parasites attach to

These microscopic parasites are natural enemies attaching to Japanese beetle larva and pupa found in the soil.

These organisms (actually non-segmented roundworms) naturally occur in soil all over the world.

You can safely add nematodes to your lawn and garden environment.

It carries no negative effect on any form of living creature other than the insect pests in a larval stage.

The nematodes actually act very fast. Once applied to the soil via watering, they get busy seeking out pests to inhabit.

When they find a pest, they enter it’s body and release a form of symbiotic bacteria that kills the pest off.

For best results apply beneficial nematodes early in the spring after all danger of frost passes.

Just apply Milky Spore to the soil of your lawn and garden, and then follow it up with a watering treated with beneficial nematodes. Repeat this process after six months time passes.

This will help boost your nematode population and spread your backfill is even more effectively.

You can find this product at your local lawn and garden center or purchase a product called NemaSeek Hb.

Using biological controls and applying Bacillus popillae and enlisting the assistance of beneficial nematodes should reduce your grub population significantly.

A few hardy adult beetles will surely emerge from the soil in the springtime intent upon consuming your flowers, vegetables and trees.

You can buy natural neem oil for Japanese beetles intended for garden use quite affordably online or at your local garden center.

Neem makes an effective way to apply an all-natural spray, but you must spray on a regular basis – especially after a rain.

Begin with a stronger concentration of spray (2 %) to kill off as many existing beetles as you can.

Follow that up with a weaker mixture for prevention. ALWAYS TEST a small area for any potential reactions to plants before applying on larger spaces.

For a strong 2% solution try this recipe:

Mix the insecticidal soap with the warm water. Add the neem oil slowly and stir well.

Fill your sprayer with the mixture and use right away. Shake the solution from time to time throughout the application to make certain the neem oil stays mixed with water.

You can make bigger batches than this; however, remember it’s best for the mixture to remain at a warm room temperature for even disbursal of the oil. Use the entire mixture within 8 hours of preparation.

NOTE: Natural Neem oil and Insecticidal soap is not selective and will also kill beneficial insects.

Make A Stronger Or Weaker Solution

Simply reduce the amount of neem oil by half to create a 1% solution.

Half that to create a .5% solution. If you don’t have insecticidal soap on hand, you can use another type of detergent (e.g. dish soap).

Additionally, you can make the batch more concentrated by doubling the amount of soap or detergent.

When you apply the neem oil mixture, make sure to completely cover all surfaces of leaves and plants, especially the undersides of the leaves where insects love to hide.

Drenching the soil surrounding your plants is also a good idea (and a good way to use up leftover solution if you make a big batch).

Neem oil benefits the soil and will help prevent insects climbing up on your plants from the ground.

Generally speaking, you should begin the spring growing season with a strong application and keep a close eye on your yard and garden.

If you see the signs of insect predation, go ahead and make another application.

You may want to make it stronger and remember to apply a fresh dose after rain.

Japanese Beetle Traps – Do They Work?

One remedy suggested to gardeners are specially designed pheromone traps.

Many gardeners soon discovered after setting the pheromone traps that they made the situation worse as the traps were drawing the feeding beetles into the area.

Even with all of your time-consuming treatments, a few individual Japanese beetles will show up from time to time. This is especially true in very warm weather when with still air in the early morning hours.

When you see individual Japanese beetles, hand picking them off and dropping them into a bucket of soapy water is a good start.

This will kill them and eliminate the scent of their pheromones which attracts other beetles.

You may also like: Tips On How To Control Figeater Beetles

Although difficult, finding plants the Japanese beetles do not like, is possible. Here are a few good choices:

To lure them away from your preferred plants, plant geraniums or a cheery, attractive border of marigolds around your ornamental and veggie gardens.

Marigolds come in an attractive array of shades and sizes and can add both beauty and protection to your garden setting.

More from the people that study them via umn.edu