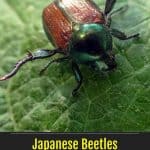 Beetles can be a real problem for most gardeners, but none are worse than the Japanese beetle.

This type of scarab beetle has a voracious appetite. It attacks more than 300 different plants and fruits.

Their grubs can decimate lawns by feeding on the roots of grasses.

While not a significant pest in Japan, these beetles were accidentally introduced to the US in 1916 and spread across the country.

Today, they’ve become harmful to agriculture. Several states west of the Mississippi maintain an active quarantine to prevent the further spread of these insects.

To deal with Japanese beetles, gardeners must fight them both above and below ground.

This battle requires extensive chemical combat for farms, but there’s a much easier and safer alternative for a small garden or yard.

Neem oil works best on small-scale infestations but can be an effective weapon against Japanese beetles and their grubs.

You’ll want to use all three forms of neem to wipe out this nasty insect.

Three Types Of Neem And What They Do

Neem oil is a natural pesticide derived from the seeds of Azadirachta indica.

The seeds are usually cold-pressed, as neem oil loses potency when exposed to heat. This results in crude (or raw) neem oil.

When ingested, the Azadirachtin can cause a larva or nymph to stop feeding. It may stunt or prevent advancement to the next growth cycle.

Neem cakes are the byproduct of creating raw neem oil and are highly valued as fertilizers for their nutritional content.

The cakes also contain traces of Azadirachtin, giving them insecticidal and fungicidal properties.

Finally, the extraction of Azadirachtin results in a processed oil known as clarified hydrophobic neem oil.  You can buy this pesticide commercially in .5% to 3% percent potency levels.

Clarified neem oil works best as a contact poison and can clog an insect’s airways, causing it to suffocate.

While each of these products works well on its own for some problems, you’ll need all three to put down a Japanese beetle infestation.

Made from 100% percent cold-pressed neem oil, the soil drench is a potent weapon against many insects. It even works for some fungi and bacteria.

You may use a sprayer to disperse the soil soak over an entire lawn. This task is best to do at dusk or dawn to avoid harming pollinators and beneficial insects.

The roots will soak up the Azadirachtin-rich water, turning it into a systemic insecticide. It remains effective for up to 22 days.

Meanwhile, the drench will soak further into the soil, poisoning any beetle larvae without harming earthworms.

Once the Japanese beetles are gone, reapply as a monthly preventative.

Foliar sprays are a topical solution using 4 teaspoons of clarified neem oil per gallon of water.

Only apply the foliar spray at dusk or dawn. Soak every part of the plant, especially the undersides of leaves and any cracks or crevasses.

The spray will dissipate after 45 minutes to an hour, leaving behind no residue. The plant will be safe for bees and other beneficial bugs.

Using the spray won’t stop any buried grubs, but it will kill any adult beetles unlucky enough to be hosed down.

Apply every other day for 14 days or until the beetles are gone; reapply as a preventative every 14 days.

As mentioned, neem cakes are an effective fertilizer, usually having a 6-1-2 NPK ratio and a host of micro and macronutrients.

Follow the instructions of the neem cake to make a water-based fertilizer and treat your plants or lawn. Make sure to avoid any plants that may harm the nutrient levels of the cake.

The fertilizer not only feeds your plants but adds Azadirachtin to the soil as well. The plants will absorb some of this.

Neem cake fertilizer has proven an effective weapon against grubs and several other underground pests. It has also proven to aid in fighting root rot and other soil-based fungal diseases.