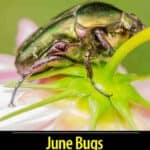 In the late springtime you may notice large numbers of brown and iridescent shiny green beetles around your lawn and garden.

These are June bugs, also known by the common names June beetle or June bug beetle.

The brown variety is usually present in greater numbers, while the green variety (also known as scarab beetles) is a bit less common.

Generally speaking, you see these brown bugs at night swarming around your porch light or streetlights.

Scarab beetles are out during the day.

Although they appear quite different, these two types of beetles are closely related.

Both species of beetles begin their life cycles as grub worm under the lawn or garden soil.

At larval stage, they are called white grubs or white grub worms.

What do June Bugs eat? As white grubs they grow and thrive by feeding on the plant roots.

When they emerge in the spring time (usually during the months of May and June) they move on to do moderate damage to your flowers, veggies, grass, shrubs and trees.

In this article, we will answer some frequently asked questions about June bugs and provide some tips to help you cope with them. Read on to learn more:

#1  – Where Do June Bugs Live and Are Most Commonly Found?

You’ll find June bugs all across North America and in many other locations around the globe.

They are most common in very warm areas, and they are quite abundant in the US southern states.

Brown June bugs are about an inch long and they are oblong. They have plain brown, hard wings.

Their bellies are usually yellowish or greenish. Being insects, they have six legs that have rough, hairy protrusions.

Green June beetles are actually rather attractive. They are a deep, iridescent, emerald green in color. Their bellies are golden.

They are smaller than brown June bugs, and they are almost pentagonal in shape.

Their bodies are rather flattish, whereas brown June bugs are more rounded.

June bugs don’t bite. You will almost never encounter the green ones as they are fewer in number and don’t tend to swarm about.

When you walk through a lighted area at night in a warm climate, you are very likely to encounter dozens, if not hundreds, of brown June bugs.

They may bumble into you, and they may crawl on you and feel strange but they will not bite you or hurt you.

June beetles live a very short time. After they emerge from the soil in late May and June, the adult beetles live for only a couple of months.

During this time, the females may lay as many as 75 eggs, and therein lies your problem!

Those 75 eggs hatch into grubs that live in the soil underneath your lawn or garden for almost a year, eating plant roots.

What do June bug do as grubs during the year? They happily munch away on the roots of your plants.

This is especially irksome if you are trying to grow root crops such as potatoes and carrots.

If you have a heavy infestation of June beetle bug grubs, you may even see your turf grass begin to peel up from the soil as the roots are chewed clean through.

June bug larvae predation will also damage other flowers and plants in your yard.

In fact, they may quickly lay waste to your vegetable seedlings when you put them out in the spring time.

If you have an especially heavy infestation of June bug larvae, you may find that the ground underfoot in your yard feels very spongy.

This is because these June beetle grubs tunnel vigorously in search of new food.

#5 – What sort of damage to adult June bugs do?

As adults, June beetles don’t actually do much damage. They do feed on some tree leaves (e.g. oak and walnut).

They may also feed on moss from tree barks leaving unattractive dead spots in their wake.

The main damage they do is simply to reproduce. As noted, a single female June bug can lay as many as 75 eggs a year.

75 multiplied by the number of June bugs currently in your yard is a whole lot of June bugs!

The June beetle grubs over-winter in the soil and metamorphose into beetles when the weather warms up in the spring.

Irritating as they are, June bugs are an abundant source of protein for many wild critters.

This is both a curse and a blessing, depending upon your situation.

Instead of asking – What attracts June bugs? Ask What do June Bug insects attract?

Take note – if you have lots of June bugs and June beetle in your yard, your space will be very attractive to wildlife such as:

Most of this wildlife is beneficial, but some can cause you problems.

For example, gophers, moles, and armadillos can lay waste to your lawn by digging burrows looking for a June beetle snack.

Toads, box turtles, and possums, on the other hand, are beneficial.

While possums can be somewhat problematic if they take up residence in your attic or under your house, toads and box turtles are entirely beneficial.

Having them in your yard and garden is a very good thing, indeed.

It goes without saying – it’s best not to attract skunks to your yard because of their tendency to spray when frightened and because of the very real danger of rabies.

It is worth noting that possums almost never contract rabies.

In fact, you can count the number of documented cases ever on one hand.

This is because possums have a very low body temperature that will not support the rabies virus.

If you have chickens, they will certainly enjoy your June bugs. Common lizards and geckos also feed on June bugs, as do most reptiles.

#7 – Can the June bug insect be dealt with entirely naturally?

If you want to attract wildlife to your yard, you may not consider June bugs to be a problem.

A healthy population of native wildlife in your yard may establish a very good balance and keep your June bug numbers controllable.

It is also possible to reduce the number of grubs in the soil by introducing nematodes.

These very tiny, structurally simple creatures live in the soil and are parasitic to June bug grubs and other insects or pests that are also soil dwellers.

Having healthy population of nematodes in your soil can help keep your June bug grubs under control.

To use nematodes, purchase them online or at your local garden center and follow package directions to introduce them to your soil in the late summer at about the same time female June bugs lay their eggs.

Another natural substance you can introduce to your soil is called milky spore.

This is a bacterium (Bacillus popillate– Dutky) that combats all lawn grubs organically.

It will not only reduce the numbers of June bug grubs in your soil, it also works against Japanese beetle larvae, maggots, flea larvae, cut-worms and more.

#8 – Should you use pesticide to control June bugs?

While it is certainly possible to enlist a pest control company or to spray poison all over your yard yourself, this is the least desirable way of controlling June bugs.

When you poison June bugs and their larvae, you also poison beneficial flora and fauna in your yard.

You endanger your own health with exposure to pesticides, and you run the risk of polluting the water table and waterways with runoff from pesticides.

However a couple of options. Apply Bacillus thuringiensis (Bt) to control the June bug grubs in the lawn.  And according to pest killed.com. Pin
Buy Now from Amazon
If you click this link and make a purchase, we earn a commission at no additional cost to you.

“To kill recently hatched grubs, choose an insecticide product that contains clothianidin, imidacloprid, thiamethoxam or chlorantraniloprole. These products should be applied any time from late July to early September. Timing matters because these ingredients aren’t as effective if applied later in the fall when the grubs are larger. Apply the insecticides too early, however, and it will wash away before the grubs are even present.” [source]

#9 – Is there a safe way to directly control June bugs?

You can deal with the damage you see and with the individual June bugs you see on a case-by-case basis.

When you see damaged plants and grass in your yard, take positive and specific steps to remove damaged organic matter.

Seek out brown June bugs in your yard in the early morning hours when they are subdued after a night’s activity.

Collect them and dispose of the June beetle them by either dropping them in hot soapy water or, if you have chickens, giving your hens a feast!

You can also reduce the numbers of June bugs in your yard by keeping your grass mowed a little bit higher throughout the hot summer months.

Keeping your grass a little bit taller will help it to retain moisture and reduce the amount that you need to water.

Wet grass is also attractive to June bugs, so by keeping your grass longer you discourage them in multiple ways.

Focus On Controlling June Bugs Rather Than Eliminating Them

No matter how hard you try, you will never eliminate June beetles.

You could poison every existing adult and every grub on your property this year and new ones would just come along and take their place next year.

Rather than opting for elimination, focus on establishing a balance, attracting beneficial wildlife and being vigilant in keeping your June bug numbers under control.