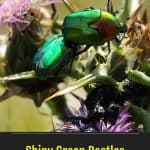 You look around your garden and get a post-apocalyptic feel. Your plants have skeletonized leaves or a complete loss of foliage. Then you spot shiny green bugs with bronze wings terrorizing your garden.

Don’t worry. It’s not an apocalypse, but it can be for your garden if you don’t take care of it.

This is a simple Japanese Beetle infestation in your backyard. These insects are persistent and will not give up easily. They can destroy your gardens’ vegetation.

The Japanese Beetle is biologically known as Popillia Japonica and is easy to recognize.

They are ½” inch long when adults and have a distinct metallic shine in the blue-green color, and their wing covers are bronze. Japanese Beetles have long legs and hair in their thorax region.

Japanese Beetle grubs the larval stage is fat with a dirty white color and brown heads. They are ¾” inch long and are c-shaped.

Many other insects have such larvae, so it is important to identify if it is the Japanese Beetle larvae before you declare war with them.

How Can I Control A Japanese Beetle Problem?

Japanese Beetles, also referred to as shiny green beetles, are a menace and will destroy your garden’s vegetation. If your garden is under attack, the first line of defense is to spray Pyrethrin on the affected plants.

You could also use neem oil extract to spray the plant. These are both organic and won’t cause any damage to your vegetation, but will make life a little more difficult for the Japanese Beetle.

Be sure to read the label of any product you buy before taking any drastic steps. You want to make sure that you have the right product for the infestation that won’t cause any harm to the vegetation in your garden or backyard.

Use the Neem oil pesticide for plants at the first sign of attack, as the Neem oil is more of an antifeedant and deterrent.

The Pyrethrin will actually kill the Japanese Beetle, along with other bugs and insects making life difficult for your garden’s vegetation.

Another method is to handpick the beetles. I know it is not as fun as going strawberry picking, but it is an effective method.

The Japanese Beetle is slow and easy to spot by the shiny metallic green color, making it easy to pick them off.

Hand Picking The Beetles Off

All you need to do is pick the Japanese Beetle off and throw them into a bucket of soap and water. The soap water will make them rest in peace.

The handpicking method is best in the morning when the Japanese Beetles are the least alert.

A prevention method is also available, with delayed gratification. But once the system is in place, the prevention will work wonders for ten years or more.

Second, apply Milky Spore, which also kills the white grubs. Once established in the soil, you won’t have to worry about the Japanese Beetle for years to come.

Another method used is a Japanese Beetle trap. Only use it if you have a large area of space because you want to set it up as far as possible from your actual vegetation.

If you are short of space and the trap is close to the garden, you might as well invite the Japanese Beetles for a housewarming party.