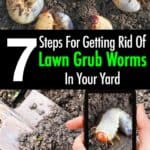 Summary: Grub worm control begins by recognizing the symptoms of grub damage which can be seen when brown patches of grass continue to expand, compliments of the Japanese beetle that live in the soil. Homeowners mainly use insecticide for treatment and control of grub problems. Read on…

Question: Our lawn is showing brown patches that appear to be growing. If you grab the grass it can be lifted up. What could be causing this? Vanessa, Somerset, KY

Answer: Vanessa, it sounds like what you are describing is grub worm damage from a grub infestation. You need to look into controlling the culprit – the Japanese beetle lawn grub worm.

If you are seeing patches of grass turning brown and the area is ever-widening, Japanese beetle grubs may be at work.

When injury is severe, the infested turf can be lifted readily (just like the symptoms you described) and almost rolled back like a carpet – and the grub worms may be seen underneath at the outer rim of the brown patches, where the grass is still green.

These grubs feed on grass roots cutting them 1″ to 2″ inches below the soil surface. This type of injury is most likely to occur during late summer, particularly in the months of August and September and in mid to late spring.

Newly damaged grass wilts quickly on hot days. In some cases, a prompt thorough watering will enable the soil or turf to reroot and to survive.

How To Get Rid Of Lawn Grub Worms – Control & Treatment

Once you detect Japanese beetle grubs, your method of attack is to use an insecticide.

Years ago an application of six pounds of 10 percent DDT or five pounds of 5 percent chlordane dust per 1,000 square foot would check the grub worm as soon as water moved the insecticide into the feeding zone… but those days are long gone.

Now there are several pesticides on the market to kill the grub worm in the lawn and garden. Diazinon has been around for years and is an old standby for the home gardener. Diazinon is effective, but the downside is the insecticide can take 3 weeks to put a killing on the grubs in the treated area.

The When Of Grub Worm Treatment

Grubex from Scott’s is effective and a long lasting pest control but like diazinon Grubex can take 3 weeks to kill the grub wroms under many conditions. Scott’s recommends applying Spring to Late Summer before insects hatch to prevent turf grass damage.

The best time to apply is probably around July once you know the numbers of adult grubs are high, soil moisture is low to keep the beetles egg laying concentrated.

What Is A Grub Worm?

The grub worm is the larval stage of various insects with the vast majority of them coming from the beetle family. This in itself is not a surprise considering the fact that most insects belong to this group.

TheEuropean chafer and Japanese beetle larvae are especially notorious when it comes to destroying lawns and they also represent the biggest grub worm beetle threat in North America.

Grub infested turf is at its worst around August. This is the part of their life cycle (beetles have a three-year life cycle) when they start to surface, destroying pretty much anything (but mostly roots) they can get to grow up and finish their metamorphosis.

The fact that the grub worm is destroying roots and anything it can find in the ground areas is bad as it is, but they bring another negative aspect with them. That is the other predatory animals that like to feast of them.

This can be a very bad combination for your lawn and the grubs living in the garden. The damage will be doubled if you let these happen.

It’s a cliché, but the best counterattack is prevention!

I realize it often feels annoying to hear this, but the best solution is to prevent these little root eating worms from being able to damage your grass in the first place.

If they are not there, they naturally cannot do any damage. How can you prevent them from being there, or deal with them once your lawn has a worm infestation?

The good news is that there are several working solutions for you.

How To Get Rid Of Grubs For A Healthy Lawn?

In order for the grubs to get into the ground in the first place. The adult beetles emerge in early June and need to lay their eggs. As it turns out, they don’t really like to do that in long grass.

You can cut your grass of course, but keeping it relatively long can help you prevent the insects to look at your property as an incubator. There are other ways of keeping the little lawn and garden pests away, like:

Over-seeding by spring and early fall is much healthier than overeating, and in this case it can be extremely beneficial for a generally healthy lawn. Again, grubs aren’t just a problem, they attract a problem.

When these pests eat your plants’ roots only to end up as the food of an animal that will do equally big damage to your garden, well, that’s pretty much the worst case scenario as far as grub infestations go.

By over-seeding your lawn during the spring and early fall, the grass will simply be too dense and thick for adult beetles to find it accommodating.

3. Fertilizing Your Lawn A Valuable Ally

When it comes to insect-related plant problems, fertilization can be a very valuable ally. People tend to fear this process these days, but in reality, it is still the most potent weapon against certain pests.

The fertilization process itself should be done in two phases for maximal efficiency, the first phase during the fall months, and the second phase in the early spring lawn care season.

If possible, putting down a layer of dead leaves after the first phase is ideal, that way you will maximize the fertilizer’s effect during the winter months.

4. Water The Lawn Is Not Always Good

While it’s true that your lawn needs to be watered frequently during the hottest months and coincidentally the grub eggs hatch around the same time (early August), you can circumvent this problem by changing your watering schedule.

See, your lawn is perfectly fine with getting a lot of water once, instead of you spanning your watering activities over several days.

If the eggs do not get frequent moisture, their chances of ever hatching will reduce significantly.

Fertilization can help you prevent the problem while poisoning is a measure for the times when you realize that the grub eggs have already been laid down.

There are certain garden chemicals and grub control products that contain potent – but to humans not really dangerous – chemicals and ingredients, like imidacloprid, trichlorfon, or halofenozide.

Merit insecticide (amazon) is a product like that, and it will poison the grubs when they hatch. Make sure to educate yourself about the product though, as some can affect (or even kill) the birds that would eat the grubs.

Despite their reputation, parasitic wasps can actually be beneficial insects for more than one reasons. Certain types (ground wasps or hornets, which really are wasps) hunt grubs and will, in fact, seek them out to take care of the problem for you.

Okay, they’ll be more driven by their predatory instincts than your wishes and hopes, but it’s the end result what counts, right?

Another counterattack comes from Mother Nature herself, birds. Yes, birds can actually cause quite a ruckus themselves, but overall they are still beneficial to your garden.

You should take measures to protect your seeds from them, but they will also snack on the grubs which is ultimately something we want.

How can you attract birds to your garden? It is easy. Simply put up a bird feeder close to the problematic areas, and let them go to town on it.

This may be a more of a “solution” that is not very dependable and would be low on my list of remedies!

8. Kill Grubs In Your Lawn With Beer

Yes, it’s not just you who’s likely quite fond of beer (sorry if I’m way off), but these slimy little lawn enemies as well. This idea may sound like a waste of a fine beverage, but you don’t have to use the best stuff, they aren’t really picky about it.

Simply dig a hole big enough to accommodate a plastic container of your selection (it shouldn’t be too big or too high), and pour the stuff in it. After that, all you have to do is wait until the morning.

You may also collect a bunch of slugs and snails. This may be possible in a small area but a large lawn just not very practical.

It’s an organic compound that attacks larvae of Japanese beetles. It can be applied with a spreader anytime from spring through fall. It suppose to kill grub for 15 to 20 years.

Harmless to all other living things and will not affect birds, bees, beneficial insects, fish, animals, plants, or humans. a 20 Provides up to 7,000 square foot of coverage.

10. Apply Parasitic Nematodes To Your Yard

Sounds frightening, but parasitic nematodes will mostly affect the grubs, though not all types.

Some species of white grubs will be more susceptible to the method than others, but they work excellently against the most widespread type (Japanese beetles).

Why does this matter?

Simple, if your lawn has large brown spots and with a little tug the grass can be pulled up like a bad toupee, you have grubworm damage or the larvae of Japanese beetles. You now have some ideas on what you can do to eliminate the problem.