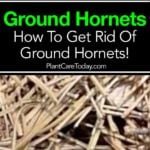 Have you ever been surprised by ground hornets buzzing and biting? These ground wasps are quite large that use dry earth to build their wasp nest in the ground. They like the soft, powdery ground as it is ideal for them to build their home – usually in abandoned rodent burrows.

When it comes to their size, ground hornets are quite imposing, measuring about 0.5 inches in length, but sometimes even more.

People often use the terms “wasps” and “hornet” to describe Yellow Jackets with its bright yellow and orange stripes.

Hornets are problematic because of two aspects: for starters, they have quite a dangerous sting, especially if you are allergic to it.

Young children are more susceptible to having an adverse reaction to the wasp sting and since these hornets often choose the sandbox as their building site, this is a pest control problem.

The other thing is their nature. The adult hornets are ferocious predators, feeding on beneficial insects that are very important to the garden eco-system.

When a single hornet is squashed or just disturbed, it releases a pheromone that will attract more of them. This can lead to bigger attacks.

Where Do Ground Hornets Live?

In order to effectively get rid of them, first you have to assess the situation. The best is when you are able to see the signs way before the problem develops into a bit of an emergency.

When there are ground wasps in your garden or anywhere else on your property, there will be clear signs of it.

These wasps don’t like wet ground, that’s the most important clue. You have to pay attention to the dry areas. The driest spot will always be the best spot for them to start their little construction project.

They can live in moist ground but that’s not really what they prefer, so never look there first.

The eastern cicada killer wasps look for nesting spots in locations near trees in full sun where cicadas live. Populations can grow rapidly. The cicada killer can ruin lawns and flower beds by digging tunnels in the ground.

If you see small, grainy pieces of dirt piled up and a hole close to them, you can be sure that you either already have a hornet infestation, or you could find yourself dealing with one in the near future.

The ground wasp nest could be randomly built but always look for the signs in the driest areas first.

How to get rid of hornets naturally (Related Reading): 6 Natural Ways For getting Rid Of Wasps

Life Cycle Of The Ground Hornet

Depending on where you live, the hornets’ life cycle could fall on different dates. In North America they are typically between July and August.

The little hornets who play with each other grow into dangerous killers pretty quickly, in less than a month. At full-sized, they don’t back down.

Hornets don’t attack unless provoked. Of course that doesn’t have to be voluntary, it’s perfectly enough to sit on the little guy without noticing it.

Stings from a ground hornet can be dangerous not just from an allergy standpoint, but in rare cases the venom can cause an infection and even sepsis if not treated.

Removing hornets nest usually equals killing ground hornets, preferably all at once so they can’t start over and create another underground wasp nest or repopulate the existing one. If you fail to kill all of them the little ones can come back later.

Even if the removal process is successful, that doesn’t mean other wasps and hornets cannot be back.

When To Remove Ground Hornet Nests

Doing the procedure at night or shortly after sunset is a good idea. The reason is that hornets do not see well. The process will obviously cause a ruckus during which some of them can get away and try to identify their attacker.

Since they do not see well, the chances of being stung will be reduced.

How To Get Rid Of Ground Hornets – Removal Methods

3 Methods on How To Kill Ground Hornets:

Some people are shocked when the find out that hornets are meat eaters but the truth is that nothing is as enticing for them as fresh meat (unless they are on their sweet tooth diet).

With the right combination of meat and insecticide the hornets have no chance.

You can buy bait station kits online or at your local gardening shop (most likely).

These kits usually come with clear instructions but just in case they don’t, this is how it should go down: first set up the station, then mix the insecticide with the meat before putting the trap out.

It is best to use this method during the spring and summer months, as hornets prefer a completely different diet during the colder, fall months (mostly consisted of carbohydrates, plant based materials). The baiting method can deal with the scavenging hornets as well.

The trapping method can work when you are not exactly sure where the nest is, or how many nests are on your property. Using fruit juice or meat allows you to lure the insects in from a close but unidentified spot, trapping them inside. There are several underground wasp trap kits available.

You can purchase the stuff at many stores, even the supermarket. You will need two or three (possibly even four) gallons of it depending on the severity of your hornet situation. You should also buy some plastic knives as they will be crucial to the process.

Just like the vast majority of these methods, the removal will happen during the night. First try to find the giant ground hornet nests with the above described method (check for telltale signs on the driest areas of your lawn) before marking them with the plastic knives for the night showdown.

During the day a lot of the hornets will likely be out exploring or hunting, so they will not bother you if you are gentle enough. Simply put the plastic knife close to the hole so you will easily find it during the night (don’t collapse it). Leave just enough out for you to notice.

Once the Sun is down, carefully approach the nests with the ammonia and a plastic cup. At or after 11 pm the hornets will likely be asleep or nesting which makes the process easier for you. With a flashlight or your phone in your hand, approach the holes you marked earlier.

Once you are there, pour two to three cups of ammonia into each hole. If you don’t have enough of the stuff, you can mix it with water but never go below a one-to-one ratio. The knives should stay until the next day where you will repeat the process one more time.