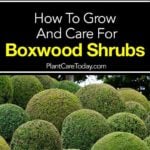 Boxwood shrubs aka Buxus is regarded one of the oldest ornamentals man has cared for in the garden. It was introduced in the United States of America from Europe in the mid-1600s.

It reached the peak of its popularity in the nineteenth century and during the colonial era. It is nowadays maintained by many people all over the world for making their fence line and garden look attractive.

Some varieties of the boxwood have sweet smell which freshens the air around your home.

There are around 90 species and over 365 cultivars/varieties that demonstrate the wide foliage and forms. They are a good addition to your garden for a natural beauty.

Boxwood plants are evergreen shrubs that are dense and planted in both informal and formal elegant landscapes.

Boxwood is grown for foliage or better yet their “shaping” abilities since they have insignificant flowers.

Choosing to grow boxwood in your home landscape allows one to create a matching order, formal hedge or a balance to an entryway. Planting boxwood shrubs can also be used as foundational plants or focal points.

How To Plant Boxwood

Boxwood bushes have specific needs for them to grow. For optimum growth, full or part sun location is needed. It also requires well-drained soil and adaptable.

The year round climate should also be considered. During the hot temperatures during summer, boxwood plants will appreciate afternoon shade and regular watering.

The plants should be watered deeply, since frequent shallow irrigation will not reach the root zone when growing. When the plants reach about two years old, they need at least weekly watering.

Sprinter Boxwood plants should not be planted as deeply as it can lead stress and even to some point cause death.

Adding boxwood fertilizer should be done twice a year in season that it is actively growing.

The fertilizer should not touch the leaves and proper watering should be done after adding the fertilizer.

Mulching the plant which is shallow rooted helps it to retain moisture and keep the roots zone cool.

The appropriate layer should be a 2- to 3-inches that extends 12 inches past the foliage “drip line”. The trunk should not be covered as with all shrub mulching.

Besides mulching and watering, boxwood growing is a low maintenance task. That is unless you wish to keep them as a sheared hedge.

Pruning of boxwood is the most time consuming part of boxwood bush care. Thinning of limbs is required for older boxwood care to allow sunshine reach the inner foliage.

The most common pest is the boxwood leafminer.

When the leaves begin to turn yellow, they should be treated with an organic insecticidal spray oil.

Soggy soils also lead to Phytophthora root rot. The best soil pH should be between 6.5 and 7. It is recommended that the soil be tested before planting boxwood.

Box shrubs occur in many different forms. These varieties include those shaped and pruned to form globes, columns and others that lie on the ground assuming a prostrate manner.

There are others that form a weeping shape of pyramids.

How fast do boxwoods grow?

The time frame also differs, there are those that grow fast while others grow slowly.

How To Prune A Boxwood The Right Way

Pruning removes any unwanted growth in a uniform manner helping in increasing the compactness and the density of the plant.

When the plant is sheared in the early years after it is planted, the baby jade boxwood will have more thickness and branching. When the desired density is reached, pruning and trimming will be done to maintain your desired form.

Shearing too much will lead to an outer thick layer, leaving the inner layer deprived of sunlight.

This will lead to the inner branches dropping their leaves. Shearing the shrub during the late summer is not recommended due to the fact that the new growth will have no time to get ready for the winter season.

While pruning, remember to prune the dead areas or the parts that are diseased. Also prune any stray branches. For older boxwood, older branches should be rounded to allow light to reach the inner new growth.

Planting of too many other plants around the highlander boxwood is not recommended. They possess shallow roots that may be disturbed if cultivation is done closer to the shrub.

When using evergreen boxwood at the edge of the flower beds, it should be done cautiously so that the roots are not distressed.

This can cause problems with parts of the plant or even death of the entire plant.

Boxwoods can be propagated from cuttings as well as seeds. Those that start from seeds allow more variations.

Most people go for cuttings because they are assured of the form that the boxwood shrub will take.

Winter damages boxwood shrubs. In case of reddish brown, grayish or yellow foliage, it is a sign of damage.

Branches can die especially in the middle. Proper care should be given to the plant before the winter season to ensure it can withstand the harsh conditions.

Shearing and trimming should be done with an electric hedge clipper or hand shears. Pin
Buy Now
If you click this link and make a purchase, we earn a commission at no additional cost to you.

This type is mostly found in the Mediterranean. It is used for tall, thin Topiaries and it does well anywhere you need a vertical specimen in a small space.

The green tower boxwood has lustrous evergreen leaves that give a fine texture to the garden.

The plant makes an excellent hedge plant. They should be planted close together.

This boxwood grows vigorously and has a dense up-right growth. It has tiny leaves that are bright green all year round. It forms a nice pyramidal shape even when left to stay without being sheared.

It is an excellent hedge plant and it can grow to a moderate height of about 5 feet tall and a spread of 3 feet wide.

The shrub works well in the garden or as a specimen plant in a large pot.

Green gem boxwood buxus develops into a lush mound of glossy green. It is one of the dwarf varieties and it can be an addition to the texture of the garden. It grows naturally into a solid ball shape.

During the winter season it can turn a little bronze in color. The foliage is dense, very small and makes an excellent hedge or the mass planting shrub. The plant requires little maintenance.

You will need to offer some protection in the winter season to prevent it from damages.

This type is very hardy and therefore it can survive on its own without much damage.

Even for those people who live in places that deer are a problem, these types of shrub are not so appetizing to them.

The green gem boxwood is an excellent foundation to be planted near your house or just along your fence line.

Planting boxwood can be pruned simply into a beautiful hedge. It can be used as a specimen or mass planting.

It grows nicely in well-drained soil that is moist in either partial shade or full sun.

This is one variety of boxwood that is evergreen which has dense tiny pale green leaves.

They are prized for bonsai, small hedges and boxwood topiary since they are well known for their compact growth habit.

Also, it can be used nicely as a specimen plant. They are mostly used for a low hedge, hence can be used along the driveway or on the outline of a formal garden. They are a good choice for both contemporary and classic landscapes.

It develops well in partial shade. Apart from the soil being wet, this type of boxwood requires the soil PH to be between 6.5 and 7.0.

This is a bright green plus a round evergreen shrub with tiny leaves. Its growth is slow and gives out a nice hedge or a specimen plant. It produces flowers with nice fragrance that attract bees.

These flowers mostly appear in mid spring. It’s a cultivar of the Korean Boxwoods. When left untrimmed, it forms a dense foliage which is naturally round.

It gives excellent results when it is a hedge plant, although single specimen can be an excellent addition to your garden.

When you plant boxwood, watering is a must so that it can establish an excellent root system. Also sheltering it is recommended to protect it from strong wind and full sun.

After it’s fully developed, you can make it into the shape you like.

Also known as the Japanese boxwood, this shrub is a well-known evergreen shrub that is frequently used for trivial boxwood hedges. It is a hardy plant that has small dark green leaves. It is useful as topiary and bonsai specimens.

When left to grow naturally, it can reach a height of 4 to 6 feet taking a rounded shape. The wintergem boxwood adapts very well to pruning and shearing due its dense growth habit.

The flowers bloom during the early spring season, but they are not noticeable. It is the ultimate hedge plant as well as a border plant.

It can be pruned into a small bush and it is often used as a border around herb gardens.

It looks great when planted along with other dwarf burning bush plants such as blue skies lilac or Japanese rose.

This type of boxwood shrub is a broad-leaf evergreen which has a rounded growth. It is a delicate foliage is tiny and dense.

The plant does well in colder climates and it does not turn yellow like common boxwood and other cultivars do. When left to grow naturally, it makes a lovely specimen plant.

Shearing can take place to make a hedge or a beautiful bonsai. It is also known as littleleaf boxwood.

It can make a lovely hedge to the line in the garden, make a perimeter around your property or even along the driveway.

The wintergreen boxwoods plants can be planted in almost any soil, but the most preferred soil is the nice sandy loam.

It grows moderately and the only maintenance needed is pruning. During winter it produces tiny fragrant flowers.

Pests And Diseases That Can Affect Boxwood Plants

The boxwood shrubs can be affected by several insects and diseases such as boxwood mite, boxwood leaf miner, boxwood psyllid as well as foliage and twig boxwood blights.

In colder areas, winter sun-scald is prevalent. To protect your boxwood, surround it with snow fencing wrapped in burlap to keep it away from the winter sun.

The burlap should not be left to touch the plant.

In conclusion, boxwood bushes add beauty and class to your garden and home landscape.

They are hardy requiring little effort to maintain them.  Some species naturally take care of themselves and grows into shapes that will be very attractive. Add them to your garden for their beauty like no other.