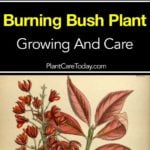 Homeowners looking for a scintillating burst of bright crimson in their garden or yard won’t have to look very far- the Euonymus alatus, or the Burning Bush is the perfect choice!

The name burning bush derives from the plants foliage during fall. Also, people remember the story in the Bible where God appears to Moses using a bush which appeared as it caught fire, but does not burn.

This native plant hails from the genus Euonymus, a group of small trees and deciduous shrubs.

The Burning Bush originally hails from Asia. It’s known by other names such as the Winged Euonymus, the Wahoo and the Winged Spindle Tree.

Burning Bush is most appropriate for describing its brilliant explosion of fiery leaves that show amazingly well in containers, beds and borders. Everyone will love its fall color.

The Burning Bush has several varieties, but most of them fall under two main categories. The Winged Euonymus, or the Euonymus alatus, the older species of the two.

It can grow up to 15′ feet tall, towering over the landscape with its uniquely winged bark.

The Euonymus alatus compactus is the second type, only reaching a maximum of 10′ feet tall and its bark is not as winged.

The Euonymus burning bush has earned its name for bearing stunning foliage of autumn display, whether as a bright ornamental display or a dazzling addition to any garden or landscape. Its fall color serve as a great decor in many outdoor settings.

The stem arches openly over with clusters of pointed leaves drooping over from the branches.

Look closer and you’ll see the curious ridges rising from the bushes’ growth, fleetingly disappearing once the stem matures.

Small flowers will grow in between the months of May to June and turn into little bright red berries that catch the attention of the birds.

These birds come in to eat, but they also help scatter the seeds which fall to the ground and become new Burning Bushes.

This plant is hardy enough to survive in almost any soil condition. Level of care is also very low, which makes it appealing to novice gardeners looking to add an easy to plant to their green repertoire.

The Burning Bush shrub is rated as hardy and can thrive in zones 4 to 8, becoming one invasive species of plants in warmer zones.

They grow well with their faces exposed to partial shade or full sun. As mentioned, you can grow the Burning Bush on almost any suitable soil, even the alkaline ones!

Owners may prepare a sunny spot for which to plant their Burning Bush in. The most optimal soil type is one that is moist and slightly acidic.

Don’t worry too much about the exact nature and water content of your soil. The burning bush can grow even if the soil is dry, poor, or has the wrong pH level.

They are wonderful plants that can adapt even in partial sunlight locations. Owners looking for the boldest red displays will need to put their plants in contact with direct sunshine.

Shade can slow down their growth and even mute the blazing leaves to faded yellow or pale pink ones.

Like most plants, the Burning Bush can do with a little more water during the summer or in droughts.

Flaming bush care can be summed up in two words- easy and stress-free. It can grow fine in less optimal conditions such as low sunlight and poor soil.

The tough characteristic of this plant makes it a favorite in landscape applications among urban landscapers and homeowners.

There’s virtually no requirement for seeing this drought tolerant plant produce bright-colored, flame-kissed leaves that lighten up the garden!

Just remember to place it where there’s plenty of sunlight and put some fertilizers come springtime to maximize the splendid display.

A compact Burning Bush dwarf is available if you have small spaces or you wish not to trim them too often, or if the tall shrub isn’t a good fit into your landscape.

The “Rudy Haag” is a variation of the Burning Bush shrubs that only grows to a maximum of 5 feet tall, while the Compactus may only grow up to 10 feet in many a year.

So, when to trim burning bush?

The speedy growth of the fireball Burning Bush might surprise its owners, as it is a shrub that can outgrow the space where you plant it in.

Though you won’t need to keep a careful eye on the plant, you’ll need to keep it bright and attractive with the occasional burning bush pruning every now and then.

Rejuvenation pruning is what you need to keep the Burning Bushes’ tall size manageable and encourage new growth come spring.

Use sharp hedge clippers or pruning shears and remove everything except 1 to 3 inches of the Burning Bush from the ground.

Don’t worry because the plant will grow right back and be as vigorous as ever!

Should you need to prune the Burning Bush tree into a more eye-catching shape, do it when the plant is dormant (usually before spring comes or in the late winter) and use sharp hedge clippers or pruning shears for the job.

Get the top a bit more narrow than the bottom for the sunlight to penetrate into the branches.

Start the pruning process and take out any branch that falls outside the picture; remove broken or damaged branches while you’re at it as well.

The Burning Bush is a favorite for garden insects and bugs, as well as the rabbits. They can destroy a Burning Bush by chewing all the bark where they can reach it.

This goes the same for stray deer, so you’ll have to keep a close eye on wild animals.

You’ll also need to check for possible fungal spots, mildew, stem diebacks and witches’ brooms on the leaves and remove them as soon as possible.

Use Neem oil an all-natural insecticide for plants or horticultural oil sprays to remove scale on plants and kill off spider mites off the plant, then scrape and rinse the destructive fungal growth as needed.

Burning bush hedge can be rooted from softwood cutting taken in spring. Use a well-drained soil and dip the cutting into a rooting hormone. Roots should begin to form in about 3 weeks.

Propagation is done naturally by birds scattering the seed to the ground. Homeowners can also spread it gathering fresh seeds and prepare soil with half-inch deep gouges during late fall for germination.

You may also start the growth process indoors after keeping them in the refrigerator at about 40 degrees for about 3 months.

Plant seeds in the summer when soil temperatures are warm. Germination should take approximately 5-6 weeks. The seed turns into a beautiful shrub in about 4 years’ time. Those who are less patient may buy their plants from a good local nursery.