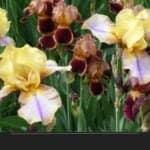 The iris (EYE-ris) is a popular garden plant found primarily in temperate parts of the northern hemisphere and a wide range of habitats.

It’s a genus consisting of around 300 species and natural hybrids, many formerly in separate genera.

The star member of the Iridaceae family, irises, are named after the Greek goddess Iris.

The latter was the deity of rainbows (and the word iris itself means “rainbow”).

Due to how complex the genus is, irises are broken down into six subgenera, based on their root and flower structures:

Only Limniris is naturally occurring in North America, while the rest are restricted to Europe, Asia, and northern Africa.

Garden enthusiasts usually simplify this into bulb irises and rhizomatous irises, then make further subdivisions from there.

Irises are incredibly popular as ornamental plants and may be found in gardens, along borders, or in indoor and/or outdoor containers.

An annual event in Florence, Italy, sees iris breeders gather worldwide to compete and can find it in almost every garden competition or show.

Regarding the flower type, bearded irises tend to be more popular than the non-bearded types, with an estimated 30,000 different cultivars for the tall bearded irises alone.

Native to Greece, Tunisia, Turkey, and Western Syria, Algerian Iris is one of the smaller members of the Limniris subgenus, reaching 12″ inches in height and bearing lilac to purple blooms.

While an attractive groundcover, this plant is also notable for its potential medicinal value and has been the subject of pharmaceutical studies.

This natural hybrid is believed to have originated in the Mediterranean area.

It can grow to an impressive 47″ inches high and 12″ inches wide.

A proud member of the Iris subgenus, this plant has hundreds of cultivars ranging in bloom color from pure white to red and even jet black, with some cultivars blooming more than once in a season.

It’s the subject of Van Gough’s famous Irises painting and one of the most commonly grown flowers in Muslim graveyards.

While many irises originated in or near subtropical regions, some species and varieties adapted to the mountainous areas.

Collectively referred to as cold hardy irises, these plants can grow in USDA hardiness zone 5 or even lower as perennials when most other irises must be developed as annuals if they can survive at all in these zones.

In addition to multiple cultivars, the most popular cold hardy irises are:

This popular cultivar was developed in the 1800s by crossing Iris tingitana with two cultivars of Iris xiphium and thus is part of the Xiphium subgenus.

Numerous cultivars of this cultivated hybrid are available, and the plant has become popular worldwide during the 20th century.

Three species of iris make up the flag irises, all from the Limniris subgenus.

Blue flag (Iris versicolor) is native to the eastern portions of Canada and the US, with shades ranging from light blue to dark blue, as well as purple and violet hues.

Slender blue flag (Iris prismatica) is found along the eastern coasts of Canada and the US, bearing pale blue to blue-violet flowers.

Yellow flag (Iris pseudacorus) is native to the United Kingdom and bears bright yellow flowers and a height of up to 5′ feet (with some accounts of specimens reaching nearly 7′ feet tall).

Flag irises are extremely cold hardy (down to USDA hardiness zone 3) and grow in swampy habitats.

This native of China, Japan, Korea, and Russia is one of the more popular Asian irises and belongs to the subgenus Limniris.

Growing to around 31″ inches tall, this plant bears beautiful purple to bluish-purple flowers with a hint of yellow and is cold hardy down to a frigid -4° degrees Fahrenheit.

Iris ensata has a special place in Japanese culture, where the cultivars are traditionally grouped into Edo, Higo, and Ise based on the prefecture of origin.

At least 15 cultivars of Japanese iris have earned the Royal Horticultural Society’s Award of Garden Merit.

This Limniris series consists of 5 species, all native to Louisiana and nearby regions:

The five Louisiana Iris plants vary in color and size, some being natural variants of others.

Of the group, Iris nelsonii (AKA the Abbeville red) is exclusively native to the Turkey Island swamp, which is now privately owned to conserve the species, which may soon become threatened due to environmental changes.

Numerous dwarf cultivars have appeared over the years, and these plants are collectively referred to as miniature irises.

They tend to grow to a much smaller 6″ to 8″ inches tall but are no less breathtaking than their parent plants.

A Reticulated Iris is a member of the subgenus Hermodactyloides, a section referred to as Iris sect. Reticulate gets its origins from Iris reticulata (AKA netted iris).

These irises get their collective name from the fibrous net found surrounding the bulbs.

At around 6″ inches tall, these miniature irises have a wide range of bloom colors and thrive in rocky soil.

One of the hardiest iris species, this Limniris species is found throughout Europe to central Asia.

Siberian Iris is a dense clumping plant with branched stems and long ribbed leaves that sometimes have a pinkish tinge at the base.

The flowers are blue to violet-blue, with the occasional white flower appearing.

A member of the Iris subgenus, this plant grows up to 31″ inches tall and has pale purple to white flowers.

It; ‘s valued not only for its good looks but also for the essential oils found in its rhizome.

Walking Iris plants aren’t true irises, but they are members of the same family and bear a striking resemblance to iris flowers.

They get their name from how plantlets form on the flower spikes, eventually causing the plant to bend over and root almost as if it was walking.

They go by several genus names, but the most famous ones are Neomarica caerulea and Neomarica gracilis.

An excellent example of a plant with a familiar name specific to gardening circles, Iris laevigata is more commonly known among botanical circles as Japanese iris or rabbit-ear iris.

The plant gained its nickname of water iris since it’s more reliant on the water than other members of the Limniris subgenus.

Many other semi-aquatic species, such as the blue flag, are sometimes referred to as water irises.