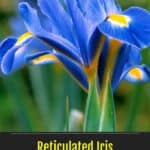 One of the more exciting types of irises out there, Iris reticulata (EYE-ris reh-tick-yoo-LAY-tuh), is a native of the Caucus Mountains from Russia down into Iraq and Iran.

This perennial member of the Iridaceae family belongs to the subgenus Hermodactyloides, initially considered its genus.

It gets its species name from the fibrous netting that surrounds new buds.

This iris is also the namesake for a small group of irises that share the netting feature, such as Iris danfordiae and multiple hybrids.

These dwarf irises will initially grow vertically faster than horizontally, although they’ll eventually balance height and width of 4″ to 6″ inches.

The bulbs have a fibrous netting coating the outside and will produce offsets as they age.

Meanwhile, the plant’s strap-like leaves are an attractive bluish-green color and become more dominant once the blooming phase is over.

At this point, they’ll grow from a height of up to 9″ inches to more than 1′ foot.

As the flower stalks are shorter, the delay in foliage growth is readily appreciated.

Compared to other iris species like the bearded irises, this dwarf iris doesn’t have particularly large or long-lived blooms.

However, it’s one of the earliest blooming plants in the garden, and the tiny blooms are pretty showy with a pleasant (albeit less pronounced than in bearded irises) scent.

While this is the dominant coloration, reticulated irises are also known to produce blue, yellow, or white blooms on rare occasions.

Individual flowers only have a lifespan of 3 to 7 days, although the blooms come in continuous waves for approximately three weeks total.

As with other irises, you should place this plant to get at least 6 to 8 hours of full sun per day.

In regions where the midday sun is a little harsher in the summer, you may choose to focus exposure in the morning or evening with a bit of afternoon shade.

They can also grow in partial shade conditions but won’t bloom.

Because this plant becomes drought-tolerant once established, it can survive in low to medium humidity levels.

However, as this is a mountain plant, the best places to grow it outdoors are USDA hardiness zones 5 to 8.

The plant isn’t particularly cold-hardy but can survive temperatures dipping down to -20° degrees Fahrenheit for brief periods.

This plant loves to get everything done in the spring, so it will need the most water during this time.

Test the soil with your finger and water using the soak-and-dry method if it’s dry 2″ to 4″ inches down.

You’ll probably notice the plant will use less water once it’s done blooming. It may use significantly less throughout summer and autumn, where it prefers a drier soil climate.

Feed your reticulated irises once in early spring and again halfway through the growing season.

A nutrient-rich liquid fertilizer with an NPK of 5-10-5 is perfect and helps encourage fuller blooms.

As this is a bulbous iris species, you may wish to add a 1″ to 2″ inch layer of mulch or organic compost each spring to help keep the soil enriched.

Netted irises like moist, well-draining, humusy soil with a pH of 6.5 to 7.5.

While loamy soil is best, it can handle chalky, clay, or sandy soil types, as long as they are adequately amended with an aggregate (perlite) and or organic compost.

As with most irises, you will need to uproot and divide your reticulated iris every few years.

This is best done every 3 to 4 years after blooming has ended, and the old central plant can be disposed of.

You can prune this plant throughout spring and summer to encourage new growth or remove damaged or diseased leaves.

However, it’s a bad idea to prune after August, making the plant more susceptible to frost damage.

They can be cut back to 4″ inches once they’ve died off for the season, although some growers prefer to wait until spring and cut them back to the ground.

Deadheading is optional, although it may be advisable for the netted iris if you want to get the most out of its short blooming period.

Once the final blooms are spent, you can cut the stalk to its base so the plant will focus on foliage for the rest of the growing season.

How To Propagate Netted Iris?

The division remains the simplest and most popular method of propagating this plant.

However, it’s also possible to grow one from seed if you have the patience.

Netted irises have a natural deer resistance and can become drought tolerant once established.

They’re also much hardier against disease than most iris species, with superior resistance to iris borers (the pest responsible for spreading many iris diseases).

While capable of being attacked by the same pests as most irises, the most common ones are spider mites, snails, and slugs.

They can also still be susceptible to fusarium basal rot and ink disease, although both are less common infections.

Unfortunately, this plant has the same toxicity to humans and pets as other irises but is entirely safe for horses, livestock, and birds.

As a shorter iris, the reticulated iris makes a beautiful choice for potting.

It works well with other early bloomers, such as crocuses and snowdrops.

Plant them in groups as a border or rock gardens.

While reticulated irises are rich in nectar production, they tend to be of interest mainly towards bees.

It might disappoint gardeners who want to attract hummingbirds or butterflies, but it’s a positive boon for those living near beehives or in the beekeeping industry.