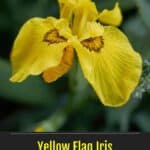 When you have a family as big as Iridaceae, expect there always to be some exception to the rules.

Native to Europe and the western portions of Asia and Africa, this herbaceous perennial has exhibited remarkable adaptability.

The plant has many other common names, such as:

While considered invasive in many parts of the US, the yellow flag offers an ability to adapt to most environments and is beautiful.

Yellow flag is known to be easy to grow but difficult to control. Many garden sites even give it a greater care difficulty.

Yellow flag has a moderate growth rate of 3′ to 5′ feet tall (although 6′ foot specimens have been recorded) and 2′ to 3′ feet wide.

When allowed to grow in marshy areas, it can have a fast growth rate.

Unlike most irises, this plant thrives in water but will suffer stunted growth in drought conditions.

The rhizomes can spread quickly underground while the above-ground part is self-seeding.

As a result, it’s very easy for this iris to escape control and take over.

Experts suggest you plant this iris in a pot, even when growing in the garden, so the rhizomes cannot spread.

This means that caring for this plant is almost effortless and almost identical when grown indoors or outside.

When it’s not in bloom, it’s easy to mistake this iris for other common water plants.

The scientific name means “false acorus,” referencing how much it resembles the sweet flag.

Its long, swordlike leaves are approximately 1 ⅛” inches wide and up to 4′ feet long. They tend to be a light greyish-green.

The yellow flag is very popular due to its bright yellow blooms, which are not present on any iris species native to North America.

These yellow flowers have bluish-brown veins, but the shade of yellow and vein coloration varies among the more than 60 cultivars currently available.

It’s most common for these plants to bloom from May through June.

However, the flowers may appear earlier in spring or as late as July, depending on their growing zone and local environmental conditions.

Between 4 and 12 flowers will appear on the central stem.

Each bloom measures up to 4″ inches across with 3 large downward-curving sepals and three small upright petals.

Each pod contains many tiny brown seeds that self-propagate.

Thus, it’s best to remove the pods as soon as you see them forming.

Here’s where things begin to get vague.

A yellow iris can handle anything from full sun to partial shade.

But the amount you give it has different effects.

The less sun it gets, the less water it will need, making partial shade preferable in garden settings.

Another vague aspect of the yellow flag is its ability to handle a wide range of temperatures.

It’s generally best to grow them outdoors in USDA hardiness zones 5 to 9.

But it’s possible to find them growing as far north as zone 2 in parts of British Columbia, Canada.

A hard frost can even help condition the plant and aid in its growth the following year.

Grown indoors, this plant can handle pretty much any temperature.

But it will need more watering if the air is too warm.

As mentioned, this plant loves the water, unlike most irises.

While the average iris is at risk of root rot, water iris can grow in as much as 10″ inches of water.

When using the soak-and-dry method, you’ll want to add water whenever the surface feels dry to the touch.

Exposing the plant to brief periods of drought may stunt its growth and prevent it from flowering.

The sunnier the location, the more water your yellow iris will need.

It works well at the edges of ponds or other water features, although you need to be careful of its ability to escape.

Here are some tips to consider:

Yet, plants growing along a pond or similar bodies of water will get plenty of nutrition from the algae or other microscopic life in the water itself.

Unlike most plants, avoid good drainage in favor of heavier soil that will hold in some water.

Here are the following tips for soil mixture:

In this vein,  you’ll want your potting or garden soil to match these qualities.

Repot your yellow flag iris every 3 to 5 years to control the rhizome size.

While most plants need suitable drainage holes, this iris prefers a pot that doesn’t drain or drain slowly.

If you have 1″ to 2″ inches of water sitting over the soil surface, it will even be grateful.

It wouldn’t be amiss to say that caring for a yellow flag iris was 95% percent spread prevention and only 5% percent actual care.

Here are deadheading tips to consider:

However, prevention is a much more formidable job than grabbing the seed pods.

When digging up this iris, it’s vital to get every bit of rhizome, as the tiniest slicer can regrow.

Likewise, dispose of all parts of a yellow iris safely.

Finally, when controlling your yellow flag population, avoid disturbing the surrounding soil too much.

It can encourage fragments to grow, and a seed can germinate several years after it lands on the ground.

How To Propagate Water Iris?

It’s a bad idea to allow this plant to grow seed pods, as it will self-seed and run rampant.

However, the dried seeds may remain viable for many years.

A safer form of propagation is by dividing the rhizome every 2 to 3 years.

Yellow flag iris is incredibly hardy and can withstand frost and minor flooding.

It’s resistant to both deer and rabbits and somewhat drought-tolerant at the cost of some growth.

This iris plant is resistant to disease and is far less likely to suffer from root rot than other irises.

But it does suffer from various pests:

As with all irises, the yellow iris is toxic to humans and pets and may result in digestive problems if consumed by livestock.

Because of its ability to attract bees and butterflies, the yellow flag iris is a popular choice for wildlife gardens.

You can plant it as a border plant along with water features.

But it’s best to sink the plant in a container to prevent the rhizomes from spreading.

Flower arrangements often display both the flowers and seed pods.