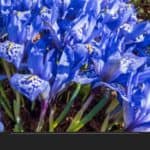 Irises are a complex topic, with the genus having six subgenera, four of which were once considered their genera and grew from bulbs instead of rhizomes.

These plants come from all over the world, and the number of species is considered to be between 260 and 300.

That said, irises have a reputation for being primarily pest and disease-free.

Still, the wide range of natural habitats and physical traits means you could write a small book on the potential problems irises face as a whole.

Here are some of the most common pests and diseases to watch out for, what they do, and how to protect your irises from them.

What Pests And Diseases Affect Irises?

Bacterial leaf blight (Xanthomonas campestris) tends to spring up when your iris’s leaves get wet.

Botrytis rot (Botrytis convoluta) is a deadly fungal infection that can affect the entire plant but is concentrated in the roots of rhizomatous irises.

Leaf spot (Mycosphaerella macrospora) is a common fungal infection that tends to appear in overwatered plants or on leaves that have had water sitting on them.

Nematodes can often be beneficial, but some species, such as Ditylenchus destructor, are harmful to iris bulbs.

Soft rot (Erwinia carotovora) affects iris rhizomes that have been damaged and are often a consequence of iris borer damage.

Viral infections are incurable and often affect various plants, making it easy for the disease to spread through your garden.

Irises are affected by a range of viral diseases, including:

Aphids are one of the most common plant pests and can affect irises and most other plants in your garden.

Beetles are another common pest, and many species love the taste of iris leaves and flowers.

Iris Borers are nasty pests that are the caterpillars of moths that overwinter in the foliage as eggs.

Thrips are tiny insects that can affect both the roots and foliage of a plant.

What Damage Do These Problems Cause?

Bacterial leaf blight creates water-soaked spotting on the leaves that blister in the presence of moisture, although the swelling decreases in dry weather.

Botrytis rot causes the rhizomes to become dry and mealy, with shiny black granules forming on the surface.

Leaves of the affected plants don’t sprout as numerous as on healthy plants and are yellowish, turning to brown and dying over time, often with masses of gray fungal spores covering them.

Crown rot forms white fungal threads at the base of the leaves but rots them top-down, usually creating tan sclerotia between the infected leaves.

Ink spots can often rot the bulbs before the plant has a chance to bloom.

It forms small spots and streaks along with the leaves, which swell and turn reddish-brown, often with a grey core that produces masses of spores when it’s wet out.

Harmful nematodes will form black streaks along the veins on the outer layers of infected bulbs and create a hollow groove between the basal plate and outer scales.

These symptoms can also extend to the base of the leaves, while the leaves themselves may die from the tips or suddenly collapse from internal rotting.

Viral infections can have a range of symptoms or affect only certain plant parts.

Both aphids and thrips are piercing insects, feeding on the sap of leaves.

Thrips can also affect the roots of rhizomatous irises, while aphids are known to transmit several viral infections.

Beetles will munch on the leaves and buds of your irises, often opening the door to infections, as well as making the plant look unsightly.

Iris borers are perhaps the worst threat, however, when the eggs hatch, the caterpillars bore into the leaf surface and begin tunneling down into the rhizome before boring their way into the soil to metamorphose.

Not only do the borers cause damage to the plant and rhizome, but their activity is often followed by diseases such as soft rot, which gets into the rhizome through the bored holes.

How To Control Iris Pests And Diseases?

Neem oil is an excellent defense against most pests and may even help against some fungal infections.

A neem foliar spray kills pests on contact and can fight some surface fungi.

Meanwhile, neem soil soaks act as a systemic insecticide, sterilizing and killing any biting or piercing pest slowly and helping the plant fight off many internal bacterial and fungal infections.

It’s best to destroy any bulb or rhizome that’s infected with a disease, and you may also need to sterilize or replace the soil, as many of these diseases can survive for years without a host.

Diseases that affect only the leaves of a plant can often be treated by removing the infected leaves and treating the plant with a fungicide.

In the case of diseases that affect both the roots and foliage, you will need to destroy the plant.

To reduce the risk of infection or fungal disease, practice good watering habits and never get the foliage wet.

Avoid planting rhizomes too deep or bulbs too shallow, including the use of mulches that may provide shelter for pests or trap water under the surface.

Never buy cheap potting soil or topsoil unless the company has a sterling reputation. These lower costs are often a sign the company didn’t sterilize the soil before packaging it.

Finally, in the case of viral infections, there’s no alternative but to destroy the plant and the soil because diseases were contained in, and avoid planting irises in the same spot in the future.