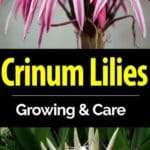 In Greek, the name Crinum simply means “Lily.” By all the looks and feel, Crinum plants have all the characteristics of a lily.

These plants have all the typical “periods” we find in the lily family:

Crinum asiaticum (also known as Crinum amabile or crinum amoenum) is one of the largest bulbs at maturity, with a leek-like base up to eight inches in diameter and giant leaves up to four or five feet long and six inches broad. It is an important landscape plant in Florida.

Bulbs of Crinum lilies are much larger than bulbs of its relative, the Amaryllis (amaryllidaceae). Roundish, with long tapering necks, bulbs of a crinum can be 12″-16″ inches in length.

Generally, the leaves are thin and long with a “silky” feel, and some crinum lily varieties have wavy edges.

The flowers are unique and beautiful, but even with the flowers, the crinum is a handsome decorative plant that can get very large.

Because of their size, crinum lilies require more room than ordinary amaryllis bulbs. They are among the most interesting and rewarding of the amaryllis types to grow in a garden.

The long, slim flower stalks push themselves high above the elegant leaves to display their wares.

A stalk of flowers blooms for weeks. However, individual flowers last only a few days. Sometimes, flower stalks will continue to follow the old ones coming into sight, extending the bloom parade.

Not as fast as bamboo… but flower stalks on crinum lilies bloom quickly. From nowhere to a 24-inch stalk surprisingly fast. Sitting atop is a full accompaniment of fat flower buds.

Flowers in groups of 6-10, curving at the edge, some bell-shaped, some curved, and some spidery looking.

Crinums can be unpredictable. When they bloom depends on “their” rhythm. They can bloom in the spring, winter, or summer. It all comes down to each bulb after its rest period.

Many lily crinums indeed require more room than ordinary amaryllis-type bulbs. But Crinums are among the most interesting!

Growing Crinum plants outdoors in the landscape is fairly easy in USDA zones 7-10.

Crinum plants have been called “anti-social” since they do best when they do not compete with other plants in the garden. They can grow to be very old.

They perform best in full sun (but not burning sun, partial shade from the sun’s extreme heat), so give them all they can get and well-draining soil.

Fertilize twice a year with a balanced fertilizer. They make wonderful specimens and very attractive pool plants for landscaping by a pool.

One of the most beautiful of all the “spider lilies” is the beautiful ‘Queen Emma Plant’ Crinum lily. Its strappy leaves reach a height of about 5 feet tall with sweet-scented flowers.

Queen Emma Lily makes a nice centerpiece in the garden with handsome foliage even when not in flower. For best performance, provide full sun.

Crinums thrive in normal temperatures found in most homes. They are sensitive to cold and drafts.

When going into their hibernating period, crinums do not always die back. Generally, they do but not always. If that is the case, water the plant very lightly.

As new growth starts, cut off the old leaves. Turn the pot on its side and wait for the signs of the plant to wake up and start growing again.

When the top of the bulb begins to have green tips, the crinum is moving into its growing period. Now is the time for repotting… remember – Large bulb – large pot.

Do not bury the bulb, but leave part of the bulb above the soil. After repotting, thoroughly water the plant, then wait until growth begins before watering again.

Once the plant begins growing, water the plant regularly, allowing the soil to dry out some between each watering cycle.

Using a complete liquid fertilizer like a 20-20-20, use a liquid food regularly (monthly) during the growing season.

After its growth and flowering period, force the plant back into its rest period by gradually reducing watering.

In the summer, offshoot bulbs should develop on the “mother plant.” If the growing container is large enough – allow the bulbs or shoots to develop and leave them on.

In the spring when repotting, the new shoots should have developed their own roots. Carefully remove the shoots to start more plants. Pot and water them the same way as described above.

According to Jenks, drought tolerant crinums can grow all across the United States, from Virginia south, across the south, through Texas, and into California.

The patient flower lover who likes to grow things can gain a deal of interesting experience in lily crinum culture by raising them from seed. Crinum asiaticum, from the tropical Pacific area, seeds freely and has been known to flower two or three years from seed with special treatment.

Gardeners love crinum lilies as insects rarely attack them. But if an attack is discovered, begin to fight back immediately.

Aphids may be a problem from time to time. A good blast of warm (not hot) water should knock them off. If that does not work, try the natural organic neem oil insecticide for plants or insecticidal soap.

Outdoors or in the garden, Lubber grasshoppers can be an issue during different times of the year. For best results, pick them off, try using Diatomaceous earth (DE) or use a spray like Sevin.

Crinum bulbispermum (formerly known as Crinum longifolium or Crinum capense) an old bulb from South Africa, is the hardiest species known and will bloom four or five times in the Spring in the lower South, starting in February.

Farther north, the blooming season comes later in the year. The flower stems are two to three feet tall.

The individual blooms are delicately trumpet-shaped flowers with segments about four inches long, white with more or less red striping or red flush on the exterior.

It requires good, rich loam and likes a dressing of manure now and then. It does better on well-drained soil than in heavy wet places.

With protection, it can probably be planted considerably far up the Atlantic gulf coastal area but would require deep planting to avoid cold injury to the neck.

In Florida, it can be grown with good results with the bulb practically sitting on top of the ground.

Crinum moorei is one of the most graceful and elegant crinums, with light pink flowers and bright green, spreading leaves in a whorl at the top of the long neck.

The plant is deciduous and loses its leaves in the Fall far south. It flowers in summer, likes rich soil and plenty of moisture.

The flowers are campanulate, borne in large umbels, with long pedicels and tubes.

Other popular crinum species worth trying in any collection are:

Crinum scabrum, considered by some as the “most beautiful crinum” more here.

Crinum mauritianum, Thought to be extinct, was rediscovered in 1973 near Midlands Dam (Barrage de Midlands) in Mauritius. It’s become an ornamental in Mauritius, and used frequently in landscaping.

Crinum latifolium, with white flowers from Asia and reportedly, naturalized in the West Indies. The crinum latifolium (crinum prostate) extract is known to cure rheumatism, fistula, and whitlow and stop the growth of prostate tumors.

Crinum “Ellen Bosanquet” is a hybrid by Louis Bosanquet with beautiful wine-red flowers named after his wife.

In the southern landscape, the crinum makes a wonderful addition and statement with its size, foliage, flowers, and over beauty.